What is the meaning of the Hebrew word selah?

This word is found in the Psalms of David and the book of Habakkuk. Scholars have speculated its meaning since 270 B.C., when the Old Testament was translated into Greek. Since the Psalms were actually songs—set to music—many conclude that selah refers to musicians’ directions. They feel that selah was not a sung word. Rather, it told musicians to play louder or faster, reprise a verse, etc.

But a Jewish music expert, Suzanne Haik-Vantoura, offers a different, more fitting view. Her book, The Music of the Bible Revealed, (written in French) states that selah was not an instruction. In fact, she concludes that it is part of the lyrics. Though she gives no formal definition for the word, she believes that, like amen at the close of prayer, selah stresses the importance or reality of what was said.

What were the contents of the ark of the covenant? 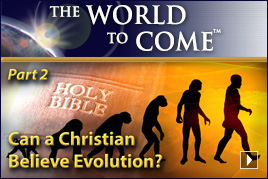 Many Christians struggle to accept the validity of the Genesis Creation account. Yet Jesus and the apostles spoke constantly of people and events described throughout Genesis. This final part bringsŌĆ”
Watch Now
Watch LaterSavedRead Suggested Literature

This brochure investigates the theory of evolution, revealing that there is much more to the story than what is commonly taught. After laying a truthful foundation and building upon it, the readerŌĆ”
Order Now
Read NowRead LaterSavedRequest Added Download ePubDownload PDF