What were the contents of the ark of the covenant?

At first inspection, I Kings 8:9 and Hebrews 9:4 seem to contradict each other. Hebrews states, “…wherein was the golden pot that had manna, and Aaron’s rod that budded, and the tables of the covenant.” I Kings 8:9 only lists the two tables on which the Ten Commandments were written. But remember, the Bible never contradicts itself.

In Hebrews 9:4, the word translated “wherein” comes from the Greek word Hou. Many concordances, including Strong’s Exhaustive Concordance, state that Hou means “at which place.” The original Greek word is more general in nature and simply means “in the same location.”

Understanding this, please read Deuteronomy 31:24-26: “And it came to pass, when Moses had made an end of writing the words of this law in a book [the civil law written by Moses—the law of Moses, not the Ten Commandments written by God on stone tablets], until they were finished, that Moses commanded the Levites, which bore the ark of the covenant of the Lord, saying, Take this book of the law, and put it in the side of the ark of the covenant of the Lord your God, that it may be there for a witness against you.”

Where is Golgotha located? 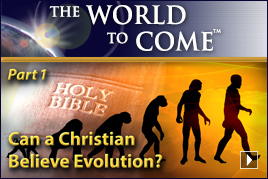 Millions of professing Christians believe God created all life on Earth, but that evolution is a natural process within that creation. Is this compatible with the Bible? Can a Christian acceptŌĆ”
Watch Now
Watch LaterSavedRead Suggested Literature

This brochure investigates the theory of evolution, revealing that there is much more to the story than what is commonly taught. After laying a truthful foundation and building upon it, the readerŌĆ”
Order Now
Read NowRead LaterSavedRequest Added Download ePubDownload PDF