WADSWORTH, Ohio, March 12, 2014 ŌĆö The Real TruthŌäó, a 10-issue-per-year publication distributed free of charge around the world, has published its March 2014 issue. 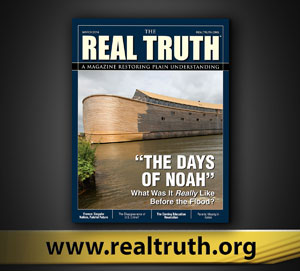 Over the years, the tale of the Flood has been hashed and rehashed ad nauseam, with nearly every culture preserving a story of waters covering Earth, usually to destroy a wicked humanity. Cutting through countless theories, wild speculation, and odd ideas, there is much more to the story of Noah than most realize.

Other Articles Featured in the March 2014 Issue

Statistics indicate that American criminal activity is down. Between 1991 and 2010, the U.S. homicide rate fell 51 percent. Property crimes also dropped sharply. Auto theft decreased 64 percent. Do such positive statistics imply that America is finally on a path to overcoming crime once and for all? What do they mean for the country as a whole?

According to the United Nations, approximately 57 million children worldwide are uneducated. Millions enter school only to drop out in the first one or two grades, long before they have acquired basic literacy and numeracy skills. As a result of these statistics and others, many have concluded that the modern worldwide education system is broken beyond repair. Yet all hope is not lost! 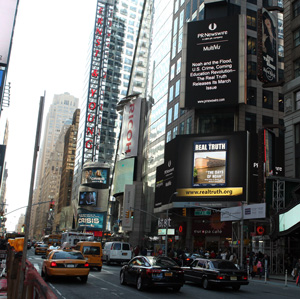 The traditions of French culture and identity are facing challenges on two fronts. One is the difficulty of integrating non-European immigrants into a thoroughly European nation. The second is the wholesale import of American and other non-French traditions into the fabric of daily life. In the years ahead, France will have to choose between loyalty to natural allies (America and Britain) or the rising power of a united Europe.

In todayŌĆÖs fast-paced and self-focused society, fathers and mothers are unwittingly abandoning their children. For varying reasons, many are growing up without the guidance they need to become productive members of society. Yet the parenting decisions we make now will affect generations to come.

The Middle East has been filled with unrest and violence for thousands of years. Governments inside and outside the region have attempted to bring peace, but have always failed. Conditions are seen to be rapidly growing much worse. In-depth coverage of history is necessary to understand the reason for such instability. It presents a pattern for the future, demonstrating the BibleŌĆÖs authorityŌĆöand proving God foretold events in this region before they came to pass.

While China and Japan have been historical rivals, much of the current tension centers around a dispute over ownership of potentially mineral-rich islands in the East China Sea.

The infectious disease tuberculosis (TB) is becoming increasingly resistant to medical treatments in Russia. The World Health Organization found that 450,000 people developed multi-drug resistant TB in 2012 with the majority of those cases in India, China and Russia.

ŌĆ£85 Individuals Own as Much as the Poorest Half of GlobeŌĆØ (p. 33)

According to a report by Oxfam International titled ŌĆ£Working for the Few,ŌĆØ ŌĆ£The wealth of the one percent richest people in the world amounts to $110 trillion. ThatŌĆÖs 65 times the total wealth of the bottom half of the worldŌĆÖs population.ŌĆØ

To receive a free hardcopy subscription of The Real Truth, download a PDF of the latest issue, or review the magazineŌĆÖs vast library of archived articles, visit
rcg.org/realtruth.