Does the Bible teach that it is acceptable for men to wear earrings?

As with certain issues, such as smoking, use of makeup, celebration of birthdays, and others, there is no specific “Thou shalt not…” regarding earrings to be found in the Bible. But there are principles in Scripture to which we can look. One is found in I Corinthians 11:14: “Does not even nature itself teach you, that, if a man have long hair, it is a shame to him?” Paul is saying that common sense—“nature”—tells us that men should look like men, not women. They should not have long hair, because it is a sin—“a shame.”

This principle applies to earrings. Typically and historically, it has been women who wear earrings. Even in today’s liberal, laid-back society, it is still mostly women who do this. Also factor in that, in recent decades, men choosing to live “alternative lifestyles” often chose to pierce their ears as a signal to others. Notice Deuteronomy 22:5: “The woman shall not wear that which pertains unto a man, neither shall a man put on a woman’s garment: for all that do so are abomination unto the Lord your God.”

Zephaniah 1:8 states, “And it shall come to pass in the day of the Lord’s sacrifice, that I will punish the princes, and the king’s children, and all such as are clothed with strange apparel.” The Jamison, Fausset and Brown Commentary explains “strange apparel” as “…garments forbidden by the law—e.g., men’s garments worn by women, and vice versa.” So we can now see why it is wrong for men to wear earrings. It is a SIN for men to appear effeminate!

Another scriptural principle applies. Aside from looking unmanly, men with earrings have traditionally been viewed as strange, outlandish, or rebellious. But a Christian must not appear this way. The apostle Paul wrote, “Abstain from all appearance of evil” (I Thes. 5:22). So, even appearance in a matter is important.

Also, jewelry of this type for men only appeals to vanity. Human beings naturally want to be accepted by the world around them. But what does God say about this? “Love not the world, neither the things that are in the world. If any man love the world, the love of the Father is not in him. For all that is in the world, the lust of the flesh, and the lust of the eyes, and the pride of life, is not of the Father, but is of the world” (I John 2:15-16). Christians must come out of the world (Rev. 18:4). And people should remember them for their character—not whether or not they bought into the latest fad.

God’s Word does mention earrings worn by men in several places, but they ALL involve God’s servants telling people to remove or give up earrings. See Genesis 35:4; Exodus 35:22; Numbers 31:50; and Judges 8:24-26. Also, recall the story of the golden calf (Exodus 32). Aaron fashioned it out of the Israelites’ earrings—including the men’s (vs. 2-4). In this account, idolatry is linked to earring-wearing!

Interestingly, the Bible does talk about men having their ears pierced, but it is not desirable. Notice: “And it shall be, if he say unto you, I will not go away from you; because he loves you and your house, because he is well with you; then you shall take an awl, and thrust it through his ear unto the door, and he shall be your servant forever…” (Deut. 15:16-17; also Ex. 21:5-6). In ancient Israel, a slave (“servant”) who wished to remain with his master had his ear pierced. Certainly no one today wishes to be an indentured servant!

It should now be clear that God condemns earrings for men. It is a sign of unmanliness, rebellion, vanity and worldliness—and even idolatry and slavery!

Giants are mentioned in the Old Testament. What happened to them? 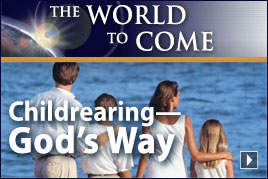 The family unit is under assault as never before. But parents can rear balanced, moral children in a degenerate, immoral society! GodŌĆÖs Word reveals much about proper childrearing. Here areŌĆ”
Watch Now
Watch LaterSavedRead Suggested Literature

The family unit is under assault from an ever increasing array of forces, with children enduring the brunt of the attack. Parents are now facing almost impossible odds against successfully rearingŌĆ”
Order Now
Read NowRead LaterSavedRequest Added Download ePubDownload PDF