Does Acts 5:3-4 and the story of Ananias and Sapphira prove that God is a trinity?

In this scripture, the apostle Peter stated, “Ananias, why has Satan filled your heart to lie to the Holy Spirit, and to keep back part of the price of the land? Whiles it remained, was it not your own? And after it was sold, was it not in your own power? Why have you conceived this thing in your heart? You have not lied unto men, but unto God.”

How could Peter say that Ananias and Sapphira were lying to the Holy Spirit? Because it was the Holy Spirit in Peter’s mind that gave him the ability to discern (Heb. 5:14) Ananias and Sapphira’s lies. Notice I Corinthians 2:11: “For what man knows the things of a man, save the spirit of man which is in him? Even so the things of God knows no man, but the Spirit of God.” This verse shows that there are things that we can learn and understand without having God’s Holy Spirit, and things that can only be understood with God’s Spirit.

Christ evidenced this ability of discernment in John 13:27: “And after the sop Satan entered into him [Judas]. Then said Jesus unto him, That you do, do quickly.” Also notice Mark 8:33: “But when He [Christ] had turned about and looked on His disciples, He rebuked Peter, saying, Get you behind Me, Satan: for you savor not the things that be of God, but the things that be of men.” (For the explanation of this verse, see the Q&A concerning Mark 8:33.)

In Old Testament times, God spoke directly to His chosen servants. Notice the following account: “And the Lord said unto Ahijah, Behold, the wife of Jeroboam comes to ask a thing of you for her son; for he is sick: thus and thus shall you say unto her; for it shall be, when she comes in, that she shall feign herself to be another woman” (I Kgs. 14:5). God had revealed to His prophet that Jeroboam’s wife was on her way and that she was going to lie. He told the prophet how to respond.

Also notice: “…for the Lord searches all hearts, and understands all the imaginations of the thoughts…” (I Chron. 28:9). Also: “For God has not given us the spirit of fear, but of power, and of love, and of a sound mind” (II Tim. 1:7). To understand how Peter could “see through” Ananias and Sapphira, consider the following analogy:

An attorney is discussing an extremely technical legal matter with a potential client. The implications are such that only a lawyer with the utmost legal understanding could properly handle the case. Also, only with complete and total knowledge of every aspect and detail of the situation can the lawyer hope to proceed. But the client, having dishonest ulterior motives, intentionally omits some minor details. Those details are so minute that they could potentially escape the attention of an attorney not deeply, intricately versed in the law. (If he were fresh from law school, he would definitely miss them.) But the attorney sees the deception for what it is. How does he see through it? Because of the knowledge of the law that he possesses. Without that knowledge, he would not recognize the lie for what it is. His knowledge of the law leads him to understand the man’s ulterior motives.

It is the same with spiritual understanding. Notice I Corinthians 8:7: “Howbeit there is not in every man that knowledge…” Job 39:17: “Because God has deprived her of wisdom, neither has He imparted to her understanding.” Romans 8:14: “For as many as are led by the Spirit of God, they are the sons of God.” John 16:13, referred to earlier, shows, “…the Spirit of truth…will guide you into all truth.” In Acts 5, Peter, guided by God’s Spirit working in his mind, was able to discern the following about Ananias and Sapphira:

After being given on Pentecost in A.D. 31, the Holy Spirit was the means by which God communicated to His servants (John 16:13).

When Ananias and Sapphira lied to Peter, he could say that they were also lying to God because:

Also, consider Peter’s statement, “…You have not lied unto men…” Advocates of the trinity doctrine seem to completely ignore the fact that the husband and wife had lied directly to Peter (a man). Peter was a flesh-and-blood human being. Was he somehow elevating himself to the status of either God or the Holy Spirit? (See Acts 14:7-18.)

Why do trinitarians not consider that part of Peter’s statement? Their argument has no strength, because it is inconsistent and does not examine every aspect of the account. As is always the case, religionists have taken a single scripture out of context and either ignored or maligned other scriptures, building a doctrinal “house of cards.”

To learn more, read our book The Trinity ŌĆō Is God Three-In-One?

Does God answer the prayers of sinners? 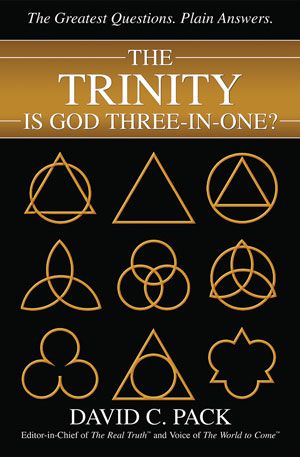 What does ŌĆ£being calledŌĆØ mean? What of the billions who never heard of Jesus ChristŌĆöare they lost? Are you being called? How can you knowŌĆöfor sure? Learn the answers!
Watch Now
Watch LaterSavedRead Suggested Literature

Does God still heal today? Did such miraculous intervention end with Christ and the apostles? Is God now working through medical science? Should Christians ever seek doctors? If so, whenŌĆöunder whatŌĆ”
Order Now
Read NowRead LaterSavedRequest Added Download ePubDownload PDF