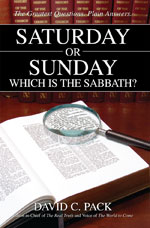 Why did Christ call Peter ŌĆ£Satan,ŌĆØ in Mark 8:33?

Satan knows “…that he has but a short time” (Rev. 12:12). He does not want to give up his hold on this world. Christ came to this earth as a physical, flesh-and-blood human being in order to qualify to replace Satan.

Because of the closeness he felt to Christ, Peter could not humanly accept the fact that Christ would have to die. Satan seized on Peter’s emotional tendencies and influenced him to rebuke Christ as he did. Christ recognized Satan’s influence. Another example of this is found in John 13:27.

Why did Christ tell Mary Magdalene not to touch Him? 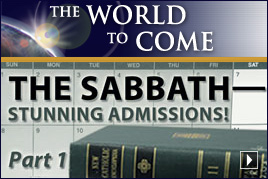 Here are startling admissions from ŌĆ£Christian leadersŌĆØ as to why billions observe Sunday as the ŌĆ£Christian SabbathŌĆØ in place of the Seventh Day! Understand what the BibleŌĆöGod!ŌĆöteaches.
Watch Now
Watch LaterSavedRead Suggested Literature

Most professing Christians observe Sunday. Yet, the Jewish people (and a few others) keep the seventh-day Sabbath. Was this day only for the Jews, or only for ancient Israel?