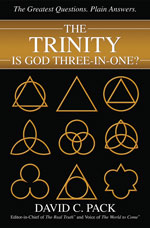 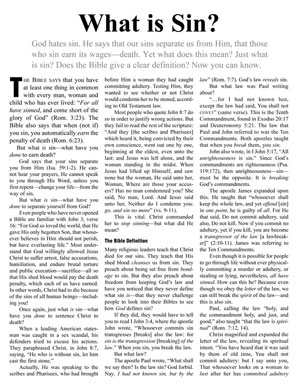 Save to read later
pdf
Available in these languages:
English English Espa├▒ol Fran├¦ais

God hates sin. He says that our sins separate us from Him. That those who sin earn its wagesŌĆödeath. Yet what does this mean? Just what is sin? Does the Bible give a clear definition? Now you can know.

The Bible says that you have at least one thing in common with every man, woman and child who has ever lived: “For all have sinned, and come short of the glory of God” (Rom. 3:23). The Bible also says that when (not if) you sin, you automatically earn the penalty of death (Rom. 6:23).

But what is sin—what have you done to earn death?

God says that your sins separate you from Him (Isa. 59:1-2). He cannot hear your prayers, He cannot speak to you through His Word, unless you first repent—change your life—from the way of sin.

But what is sin—what have you done to separate yourself from God?

Even people who have never opened a Bible are familiar with John 3, verse 16: “For God so loved the world, that He gave His only begotten Son, that whosoever believes in Him should not perish, but have everlasting life.” Most understand that God willingly allowed Jesus Christ to suffer arrest, false accusations, humiliation, and endure brutal torture and public execution—sacrifice—all so that His shed blood would pay the death penalty, which each of us have earned. In other words, Christ had to die because of the sins of all human beings—including you!

Once again, just what is sin—what have you done to sentence Christ to death?

When a leading American statesman was caught in a sex scandal, his defenders tried to excuse his actions. They paraphrased Christ, in John 8:7, saying, “He who is without sin, let him cast the first stone.”

Actually, He was speaking to the scribes and Pharisees, who had brought before Him a woman they had caught committing adultery. Testing Him, they wanted to see whether or not Christ would condemn her to be stoned, according to Old Testament law.

Most people who quote John 8:7 do so in order to justify wrong actions. But they fail to read the rest of the scripture: “And they [the scribes and Pharisees] which heard it, being convicted by their own conscience, went out one by one, beginning at the eldest, even unto the last: and Jesus was left alone, and the woman standing in the midst. When Jesus had lifted up Himself, and saw none but the woman, He said unto her, Woman, Where are those your accusers? Has no man condemned you? She said, No man, Lord. And Jesus said unto her, Neither do I condemn you: go, and sin no more” (vs. 9-11).

This is vital. Christ commanded her to stop sinning—but what did He mean?

If they did, they would have to tell you to read I John 3:4, where the Apostle John wrote, “Whosoever commits sin transgresses [breaks] also the law: for sin is the transgression [breaking] of the law.” When you sin, you break the law.

But what law was Paul writing about?

“…for I had not known lust, except the law had said, You shall not covet” (same verse). This is the Tenth Commandment, found in Exodus 20:17 and Deuteronomy 5:21. The law that Paul and John referred to was the Ten Commandments. Both apostles taught that when you break them, you sin.

The Apostle James expanded upon this. He taught that “whosoever shall keep the whole law, and yet offend [sin] in one point, he is guilty of all. For He that said, Do not commit adultery, said also, Do not kill. Now if you commit no adultery, yet if you kill, you are become a transgressor of the law [a lawbreaker]” (James 2:10-11). James was referring to the Ten Commandments.

Even though it is possible for people to go through life without ever physically committing a murder or adultery, or stealing or lying, nevertheless, all have sinned. How can this be? Because even though we obey the letter of the law, we can still break the spirit of the law—and this is also sin.

Christ magnified and expanded the letter of the law, revealing its spiritual intent. “You have heard that it was said by them of old time, You shall not commit adultery: But I say unto you, That whosoever looks on a woman to lust after her has committed adultery with her already in his heart” (Matt. 5:27-28).

James 1:14-15 shows that when men entertain wrong thoughts, they will eventually produce wrong actions. “But every man is tempted, when he is drawn away of his own lust, and enticed. Then when lust has conceived, it brings forth sin: and sin, when it is finished, brings forth death [the wages of sin].”

For example, every war, every battle, every fight throughout history has happened because men have coveted something that did not belong to them. And because men have failed to control their carnal desires, we live in world wracked by the pain, suffering and anguish of war (James 4:1-2).

The Bible records a tragic, historic example of how one man’s lustful thoughts conceived sin—lawbreaking—and gave birth to death. That man was King David.

One spring evening, as David walked on the roof of his palace, he spotted a naked woman who was washing herself (II Sam. 11:2). Instead of looking away, putting her image out of his mind, he stared at her. He allowed his mind to entertain wrong thoughts—David broke the Tenth Commandment.

This sin led him to ask about her (vs. 3). He discovered that she was Bathsheba, the wife of Uriah, one of his most trusted servants. But this did not stop David from committing adultery with her (vs. 4), breaking the Seventh Commandment. David also broke the Eighth Commandment by taking what did not belong to him—Uriah’s wife.

These sins resulted in David and Bathsheba conceiving an illegitimate child (vs. 5). Wanting to cover up the pregnancy, David tried to deceive Uriah, who had been away, faithfully fighting a war for his king. Recalling him from the frontlines, David tried to deceive Uriah into sleeping with Bathsheba, so that Uriah would think that the unborn child was his (vs. 6-13). These actions broke the principle of the Ninth Commandment.

When Uriah refused to sleep with her, David’s growing mountain of sins led him to use his enemies to murder Uriah (vs. 14-17)—thus breaking the Sixth Commandment.

What had begun with evil thoughts soon led to multiple sins—lawbreaking—and eventually led to murder. Sin always spreads and compounds itself.

Eventually, David repented. He came to see his sins the way God saw them—as terrible lawbreaking—iniquity. That is why David wrote, in Psalm 5:4-5, “For You are not a God that has pleasure in wickedness: neither shall evil dwell with You. The foolish shall not stand in Your sight: You hate all workers of iniquity [sin].”

After God had freed the Israelites from slavery, fed, protected and provided for them, gave them the Promised Land, and fought their battles for them, they still continued to sin—to break His commandments. “Yet they tempted and provoked the Most High God, and kept not His testimonies: But turned back, and dealt unfaithfully like their fathers: they were turned aside like a deceitful bow. For they provoked Him to anger with their high places, and moved Him to jealousy with their graven images. When God heard this, He was wroth, and greatly abhorred Israel” (Psa. 78:56-59). God cannot, will not, tolerate sin or those who practice it! He would never allow such people in His kingdom.

Solomon, David’s son, wrote in Proverbs 15:26, “The thoughts of the wicked are an abomination to the LORD.” This is because God knows that, if unchecked, wicked thoughts always produce wicked actions, as in Jeremiah 44: “So that the LORD could no longer bear, because of the evil of your doings, and because of the abominations which you have committed…because you have sinned against the LORD, and have not obeyed the voice of the LORD, nor walked in His law, nor in his statutes, nor in his testimonies…” (vs. 22-23).

When God used His prophet, Nathan, to confront David, David begged God to “Cast me not away from Your presence” (Psa. 51:11). He acknowledged his transgressions—his lawbreaking—to God, saying, “my sin is ever before me. Against You, You only, have I sinned, and done this evil in Your sight: that You might be justified when You speak, and be clear when You judge” (Psa. 51:3-4). David pleaded with God to “blot out my transgressions. Wash me thoroughly from mine iniquity, and cleanse me from my sin… Purge me with hyssop, and I shall be clean: wash me, and I shall be whiter than snow… Hide Your face from my sins, and blot out all mine iniquities. Create in me a clean heart, O God” (vs. 1-2, 7, 9-10).

What it Means to Sin—Break the Law

When the Bible says, “For all have sinned,” it means that everyone has broken God’s law. When it says, “the wages of sin are death,” it means that your lawbreaking automatically earns you the death penalty. When God says that your sins separate you from Him, He’s talking about you breaking His law.

Is God a ŌĆ£trinityŌĆØŌĆöthree persons in one being? Almost all professing Christians answer ŌĆ£yes.ŌĆØ Long the litmus test of traditional Christianity, the triune god is deemed a mystery, unable toŌĆ”