WADSWORTH, Ohio, May 21, 2014 ŌĆöThe Real TruthŌäó, a 10-issue-per-year publication distributed free of charge around the world, has published its May-June 2014 issue. 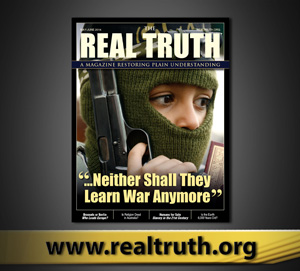 For thousands of years, mankindŌĆÖs most precious assetsŌĆötime, human life, and moneyŌĆöhave been poured into the black hole of the global war machine. Yet a day is coming when all will turn from destructive pursuits to focus on positive achievements.

Other Articles Featured in the May-June 2014 Issue

The European Union is 500-million strong. If it were a nation, it would have the third-largest population on the globe. Yet the continent remains divided, unable to emerge as the superpower it has the potential to become. Who is really calling the shots in the worldŌĆÖs largest economy?

The concept of someone placing a price tag on another human being paints a picture of one of the ultimate forms of evil. How, in a society that believes it has advanced beyond the barbaric practices of the past, can modern-day slavery still affect upwards of 27 million people? 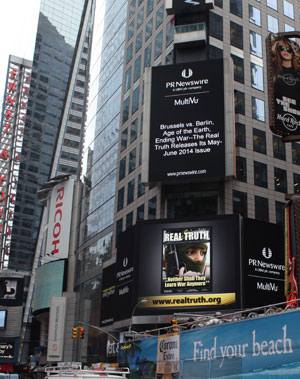 More than one in five Australians claim no religion. Sociologists, theologians and the nation itself are struggling to grasp what this means.

Evolutionists believe mankind, Earth and the entire cosmos are the result of evolutionary forces that began with a single eventŌĆöthe Big BangŌĆöoccurring billions of years ago. On the other hand, many evangelicals, some Jewish religionists, and others believe that the universe was created with just a single event 6,000 years ago. Is either view correct?

So many seem trapped, unable to overcomeŌĆöto grow in areas of weakness, fault and sin. Instead of overcoming and defeating their problems, most are overcome and defeated by them. Yet it is possible to overcome!

The two-day meeting between leaders of 22 Arab nations highlighted the growing number of disputes in the region.

Western corn rootworm beetles in the United States have grown immune to biotech crops that were originally designed to target the pests.