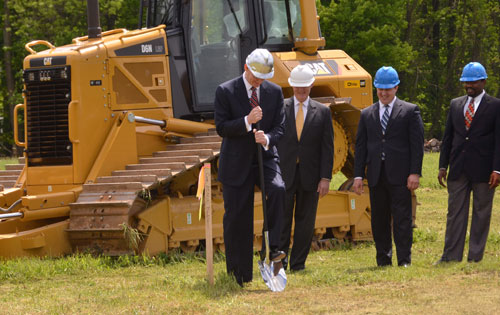 David C. Pack, Editor-in-Chief of The Real Truth and president of The Restored Church of God, turns the first shovelful of earth at the site of the organizationŌĆÖs soon-coming World Headquarters in Wadsworth, Ohio.

The Restored Church of God (RCG), which produces The Real Truth magazine and The World to Come program, held a groundbreaking ceremony to commence construction of its World Headquarters Complex in Wadsworth, Ohio on May 10, 2012.

Employees, volunteers and ministers, with spouses and children, gathered at the site as RCG founder and president David C. Pack turned the first shovelful of earth and gave the signal for work to begin on the temporary road that will lead to the construction area. Permits for this phase of the project were granted by the City of Wadsworth, and enable Medina County to now issue the final shell permits to begin construction of the building.

To commemorate the groundbreaking, Mr. Pack invited leaders of the community to a reception hosted at the organizationŌĆÖs current Headquarters location on May 17, 2012. The evening featured live music by a jazz ensemble comprised of students of Ambassador Center, the ChurchŌĆÖs co-educational two-year learning institution.

WadsworthŌĆÖs U.S. congressional representative, James B. Renacci; OhioŌĆÖs governor, John R. Kasich; and the speaker of the Ohio House of Representatives, William G. Batchelder all sent letters of congratulations to the Church. Wadsworth Mayor Robin Laubaugh (who attended the reception) delivered personal greetings on behalf of the city.

Following comments by Mr. Pack, attendees were treated to a virtual tour of the new campus.

Construction of the Hall of Administration is set to be completed in 2013.

Visit rcg.org/hq-info for updated renderings of the site, which will soon include a virtual tourŌĆöboth inside and outside the buildings.