This website requires the use of Javascript to function correctly. Performance and usage will suffer if it remains disabled.
How to Enable Javascript
Banking Crisis Tops $700 Billion 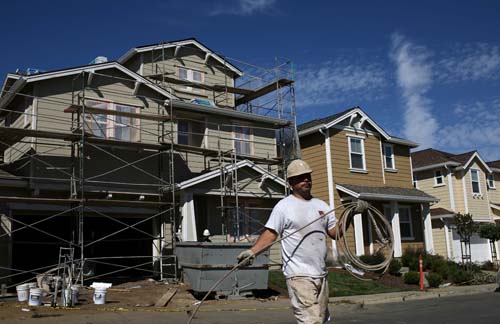 Justin Sullivan/Getty Images
Housing market going down: The Commerce Department reported that the sales of new homes dropped 11.5% in August, slipping to a 17-year low.

Risky lending practices in the housing market have led the U.S. economy into a crisis not seen since the Depression era.

Banks, eager to make quick profits and spread risk around, sold risky mortgage loans packaged as “securities” investments. When these mortgages were foreclosed, many became worthless, adding up to huge losses for banks investing in them.

With such a large amount of foreclosures occurring in a short period of time, traders moved money out of securities, leaving many banking institutions without funds to cover their liabilities. Industry leaders such as Washington Mutual, Bear-Stearns and Lehman Brothers disappeared almost overnight under the weight of these investments.

This called for government intervention on a scale not seen since the 1930s. To prevent the near total collapse of the U.S. banking industry, Washington said that at least $700 billion is required.

The U.S. government intends to buy up large amounts of mortgage-related assets, hoping the banks will have money to meet the needs of their customers and prevent more financial institutions from collapsing. Chairman of the Federal Reserve Ben Bernanke said that if these funds are not placed into banks possession, our economy will “surely suffer a heart attack, maybe next week, maybe in six months, but it will happen” (The Economist).