This website requires the use of Javascript to function correctly. Performance and usage will suffer if it remains disabled.
How to Enable Javascript
World Markets Plunge as Fears of U.S. Recession Take Hold 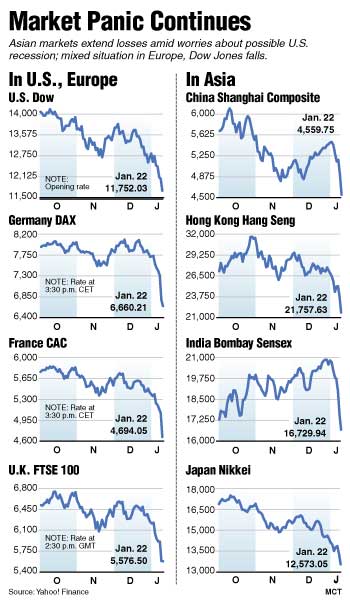 In Australia, across Asia, and then through Europe, economic markets fell following the U.S. Dow’s tepid response to the White House’s special tax relief package to help boost the American economy.

On Friday, Jan. 18, President George W. Bush proposed a $145 billion tax relief package to encourage consumer spending and hopefully prevent a recession. The stimulus plan would include tax breaks and spending measures to the American public.

Mr. Bush’s plan is in response to the nation’s housing crisis. As homeowners struggle with higher mortgage repayments, default rates are increasing, causing banks to be more careful with lending.

In response to the proposed stimulus package, which needs congressional approval, the Dow fell .5%, to 12,099.30 points—a market loss of 9% for the year so far.

Asian markets, which had taken for granted that America’s economy would stay strong, panicked as the possibility of a U.S. recession loomed closer to reality. Driven by fear and uncertainty, markets in India, Japan and China, along with Australia, fell.

In what is being called a global “Black Monday,” the U.S. economy—one of the world’s largest export markets for Asian and European companies—is being viewed internationally with suspicion, with President Bush’s emergency measures being seen as too little, too late. Investors fear a recession in America, one that could create a worldwide economic ripple effect. Many no longer question if or when, but rather “how deep?” and “for how long?”