Please explain what the Prophet Ezekiel saw in chapters 1 and 10.

Ezekiel was given visions (Ezek. 1:1) when he was among the Jewish captives in Babylon.

He saw four creatures (vs. 5) appear out of a great whirlwind. Verses 6-10 describe these angelic creatures. They carried “upon their heads” a platform made of a crystalline material. (The material was likely gold of such quality that it appeared as “transparent glass”-Rev. 21:21).

On this platform was a throne!

The Bible also defines the purpose of the cherubim (Ezek. 10:1) and the wheels under the platform of God’s throne. Various parts of the Bible show that God, at times, comes to Earth (Psa. 18:10; Ezek. 10:1-22). When He does, He arrives sitting upon His throne. The angels carry His throne at “lightning speed” (Ezek. 1:13-14) wherever God wishes to ­ go.

The “wheel in the midst of a wheel” (Ezek. 1:16; 10:10) appear to be, in a sense, types of gyroscope assemblies—one is near the position of each of the cherubim. In Ezekiel 1:12, 17 and 10:11, the fact that “they turned not as they went” also confirms some form of spiritual gyroscopic platform. Even physical gyroscopic platforms in the guidance systems of airliners or guidance missiles always keep the same orientation—they never turn. Thus, as the platform described by Ezekiel travels across the universe, it maintains the same orientation.

Should a wife take her husbandŌĆÖs name in marriage? 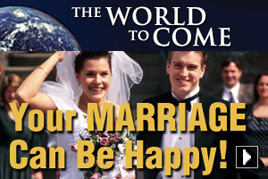 Men and women have distinct, God-ordained roles that must be understood for a marriage to succeed. By following GodŌĆÖs prescribed formula, you can have a successful, exciting, happy marriage!
Watch Now
Watch LaterSavedRead Suggested Literature