What does the Bible say about the hunting and killing of animals?

As indicated in Genesis 1:26, God gave man control over the rest of His physical creation: “And God said, Let Us make man in Our image, after Our likeness: and let them have dominion over the fish of the sea…and over all the earth, and over every creeping thing…”

The Creator then went on to very clearly indicate which kinds of animals were fit for human consumption, in Leviticus 11 and Deuteronomy 14:3-21. Very plainly then, hunting and killing animals for food cannot be wrong. King David was a hunter of game, and the disciples were fishermen. During one particular trip, it is recorded (Luke 5:1-9) that Jesus Himself even helped them with that day’s catch.

It is also not wrong to kill predators. Again, the record of David’s youth indicates in I Samuel 17:34-36 that he killed a lion and a bear to protect his flock of sheep.

When killing animals, one must carefully discern the purpose and attitude. Is it truly for food? Or is it more for the sport or trophy? Keep in mind that animals are, after all, part of God’s creation and, as such, should be treated with a certain amount of respect.

What does the Bible teach concerning insurance? 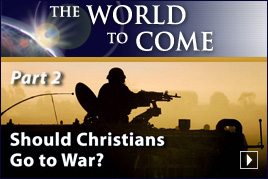 What does God tell His servants about participating in the wars of men and nations?
Watch Now
Watch LaterSavedRead Suggested Literature