Did God the Father forsake Jesus Christ, as stated in Matthew 27:46?

Jesus’ exclamation of Eli, Eli, lama sabachtani is translated, “My God, my God, why have you forsaken me?” Christ was not just expressing anguish and dismay. God did forsake Christ, as He hung on the stake. But, it is vital to understand why.

In Romans 3:23, the apostle Paul explains that all humans have sinned. Romans 6:23 further explains, “For the wages of sin is death; but the gift of God is eternal life through Jesus Christ our Lord.” Therefore the penalty of sin, the transgressing—the breaking—of God’s Law, is death.

The apostle John wrote, “Now we know that God hears not sinners: but if any man be a worshiper of God, and does His will, He hears him” (John 9:31). The prophet Isaiah wrote, “Behold, the Lord’s hand is not shortened, that it cannot save; neither His ear heavy, that it cannot hear: But your iniquities have separated between you and your God, and your sins have hid His face from you, that He will not hear” (59:1-2). Sin cuts one off from God.

However, by repenting—changing—asking for God’s forgiveness—obeying His laws—and overcoming, God will hear and respond to a person’s prayers and requests.

Since God cut Himself off from His Son, one might ask: Did Christ sin? Is that why God forsook Him as He died on the stake?

Notice: “For even hereunto were you called: because Christ also suffered for us, leaving us an example, that you should follow His steps: Who did no sin, neither was guile found in His mouth…Who His own self bare our sins in His own body on His tree, that we, being dead to sins, should live unto righteousness: by whose stripes you were healed” (I Peter 2:21-22, 24).

Christ was perfect—He did not sin. Verse 24 explains how He took our sins upon Himself, and willingly paid our death penalty. In our stead, the perfect Lamb of God was slain. Therefore, as He hung on the stake, bearing our sins, Christ was cut off from God. The same sin that cuts man off from God also cut Christ off.

If God was going to accept Christ’s sacrifice—bearing all of mankind’s sins—then God had to turn His back on Him. Thus, He neglected the One who took upon Himself our sins—Jesus Christ.

God so loved the world, that He forsook and neglected His obedient, perfect and loving Son, so that He, in turn, could bear the faults and sins of mankind.

God only applies Christ’s sacrifice to those who truly repent and turn from their evil way of life. Christ came and died to save mankind from his sins—not in his sins, as so many incorrectly believe. Without this sacrifice, man could not be saved!

But, didn’t Christ know that God would forsake Him? Then why did He ask the question that He did?

Christ did understand that God would forsake Him while He atoned for mankind’s sins. John 3:16-17 explains that this was one of the reasons why He came into the world. In fact, Christ asked this question for the purpose of fulfilling prophecy.

King David also cried out, in times of trouble, “My God, my God, why have you forsaken me? Why are You so far from helping me, and from the words of my roaring?” (Psa. 22:1).

David—a man after God’s own heart—spoke these words hundreds of years before Christ’s crucifixion. This scripture prophetically applied to Christ, and shows the anguish that He felt when God forsook Him.

Is confession a biblical practice? 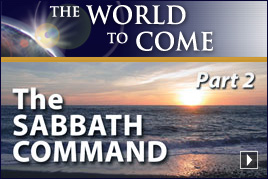