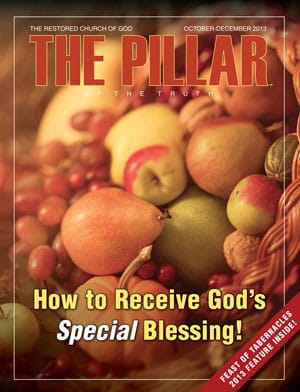 The Danger of Conspiracy Theories

Over the decades, some in GodŌĆÖs Church have been pulled off track by this deadly psychological ŌĆ£drug.ŌĆØ Could you be next?

The moon landing of 1969? It was filmed on a Hollywood soundstageŌĆ”That building down the roadŌĆöthe one with the manufacturing sign out front? It is actually a United Nations-run prison campŌĆ”You donŌĆÖt really think that NASA has a Mars Lander, do you? ThatŌĆÖs all done with computer-generated special effectsŌĆ”Did you know the most recent hurricane to hit the coast was engineered by government scientists?

To most, such statements are nothing more than bad jokes. But some peopleŌĆÖs lives revolve around such ideas.

As technology continues to connect like minds in new and more efficient ways, conspiracy theories are spreading as never before. And they are here to stay. Are they worth exploringŌĆöeven ŌĆ£just a littleŌĆØ?

Conspiracy theories have a long historyŌĆöeven in a nation as young as the United States.

ŌĆ£American pamphleteers in the 1790s warned of a plot by atheist, libertine Illuminati and Freemasons to concoct an abortion-inducing tea and ŌĆśa method for filling a bedchamber with pestilential vapours.ŌĆÖ The bestselling book of the 1830s was a racy confession by a repentant nun detailing a scheme by Catholics to undermine Protestant morals. At around the same time, Samuel Morse, better known as the inventor of Morse Code, exposed an Austrian plan to install a Hapsburg prince as emperor of the United StatesŌĆØ (The Economist).

Some of the most well-known theories involve the assassination of U.S. President John F. Kennedy in 1963, still a topic of debate. Others include:

Countless others exist, with a new round bursting forth after every high-profile event. For example, the 2010 Deepwater Horizon oil spill in the Gulf of Mexico has become a new favorite target, as many distrust official information provided by corporations or governments.

The obsession with conspiracy theories has been compared to an addiction. Once a person has delved deeply into this mindset, recoveryŌĆöa return to balanced, sound thinkingŌĆöis rare.

What draws a person to these in the first place?

Conspiracy theories are a powerful source of pride and intellectual vanity. The theorist comes to see himself as thinking on a higher plane than the ignorant masses around him. He walks the fringes of society, watching his surroundings with suspicion. No one realizes whatŌĆÖs going on, he thinks.

If speaking his mind on conspiracies causes others to recoil, he simply dismisses them as ŌĆ£dumb sheepŌĆØ who cannot see what he sees. Every episode like this further reaffirms how special this inside information makes him. The supposed inside knowledge he gains makes him feel superiorŌĆöone of the elite, enlightened few.

If anyone attempts to point out serious flaws in a theoryŌĆÖs logic, there is a standard response: ŌĆ£The conspirators purposely do certain things that appear to counter their goals, just to keep investigators off the trail.ŌĆØ Once this idea is accepted, any factsŌĆöwhether or not they appear to fit the supposed covert schemeŌĆöreinforce the theoristŌĆÖs central idea that ŌĆ£things are not as they seem.ŌĆØ

This thinking has found a new outlet with the Internet. As of this writing, a Google search for ŌĆ£conspiracy theoryŌĆØ returns about 78 million results. Websites and online forums (along with television shows) about the subject are multiplying.

Those who are drawn to this strain of thinking once relied on a scant selection of special-order books, a magazine subscription or two, and their own imaginations to fuel the obsession. Now, these ŌĆ£birds of a featherŌĆØ can cross-pollinate ideas across the world via the Internet.

This results in a large online community of theorists who validate and feed one anotherŌĆÖs delusions. Meanwhile, in the real world, the theorists become isolated from friends, family and co-workers who will not join them in a fantasy world.

One columnist wrote of this online community: ŌĆ£After all, thanks to Google we can find ŌĆśevidenceŌĆÖ in support of practically any belief. If you can imagine the conspiracy theory, there is a website out there ardently promoting it, and a clan of fellow believers who share your peculiar obsession with fluoridated drinking water and the New World Order. The end result is that we never have to recant. We can always find another link to ŌĆśproveŌĆÖ that the government is trying to ŌĆśzombifyŌĆÖ us, or that aliens are going to destroy the earth at midnightŌĆØ (Wired).

A common thread of many theories is the idea that ŌĆ£the governmentŌĆØ is responsible for terrible calamities and is generally deceiving its citizens. For example, some believe the United States turned a blind eye to advance knowledge of the 9/11 attacksŌĆöor even directly perpetrated themŌĆöand now uses doctored videos and media manipulation as part of the cover-up.

This approach plays to an aspect of human nature that the apostle Peter wrote of nearly two millennia ago, describing those who ŌĆ£despise governmentŌĆØ (II Pet. 2:10). Increasingly, the average citizen has less respect for law or authority of any kind.

Extreme examples are found in some conspiracy theorists who see themselves as above any and all lawŌĆöŌĆ£sovereign citizens,ŌĆØ as they call themselves. But this reveals the hypocrisy of many conspiracy buffs. The majority of Western governments now provide more benefits and services for their citizens than at any other time in history: medical coverage, food aid, unemployment benefits, welfare, defense, travel infrastructure, food subsidies, fuel subsidies, stimulus packages, the list goes on. How many theorists refuse the generosity of the governments they rail against?

In the years after the Worldwide Church of God apostasy and prior to the 1999 establishment of The Restored Church of God, some with the conspiracy mindset migrated into the splinter groupsŌĆöwith disastrous results.

Their heads full of paranoid delusions, they saw shadows around every corner, forgetting that ŌĆ£Unto the pure all things are pure: but unto them that are defiled and unbelieving is nothing pureŌĆ”ŌĆØ (Titus 1:15).

With time, their bizarre ideas spread to others, finding an easy landing among the ŌĆ£weak things of the worldŌĆØ (I Cor. 1:27). Certain ones became convinced that the ChurchŌĆÖs mission must now include warning the world of a sinister New World Order.

In some cases, as the addiction spread and came into the open, whole congregations were nearly wiped out. During that time, we witnessed a tragic example of the following verse coming to life: ŌĆ£For there are many unruly and vain talkers and deceiversŌĆ”whose mouths must be stopped, who subvert whole housesŌĆ”ŌĆØ (Titus 1:10-11).

These membersŌĆÖ learned distrust of and opposition to the governmentŌĆöwhich violates GodŌĆÖs clear instruction to, ŌĆ£Honor the king [and others in positions of authority]ŌĆØ (I Pet. 2:17)ŌĆöaffected their feelings toward the ministry. When a minister attempted to bring them back onto the path toward eternal life, some recoiled and accused him of being a covert Jesuit or Freemason!

And for some, the disbelief and skeptical mindset was next turned toward the Bible itself, leading them to reject its divine inspiration. They let themselves be spiritually slain by this toxic thinking pattern!

Make no mistake: there are conspiracies on planet Earth. Anyone with basic knowledge of human nature understands that some groups are perfectly willing to commit covert crimes to gain advantage, power or wealth.

However, the idea of well-known international organizations, with widely varied and often conflicting interests, somehow working together behind the scenes over decadesŌĆöalways conspiring, but never quite achieving their secret goalsŌĆöbecomes silly when examined in the light of reason. This is perhaps most true with theories that involve groups such as the United Nations, which have bureaucracies that make meeting even their publicly stated goals difficult, never mind covert agendas.

Is there any way to know what is true?

There are ultimately three positions one can hold on these theories: First, they are all trueŌĆöwhich is definitely not the case! Even if they were reality, there would be nothing you could do about them. Second, they are all false, and obviously should not demand your time and energy. Third, they are a mixture of both, and there is no way to know which is which. If this is the case, then what is the point of delving into them?

One terrible result of these ideas is that untold hours of human energy and attention, which theorists might otherwise have put toward productive endsŌĆöfor example, using the tools of Christian growth!ŌĆövanish in a cloud of smoke.

Despite most conspiracy theories being wild speculation and fiction, there is a real conspiracy that is underway. Satan, the ultimate conspirator, plots constantly, using his fallen angels and certain human agents.

His first conspiracy was against God Himself. Of course, nothing can be kept secret from an all-knowing God, and SatanŌĆÖs plot to overthrow his Creator inevitably failed.

The next plot was against the first humans, Adam and Eve. This plot succeededŌĆöour first parents were fooled into choosing the way of death. But this was only a temporary victory.

Next, Satan tried as hard as he could to prevent Jesus Christ from redeeming humanity, paying the price for our sins. He failed!

Shortly afterward, he successfully hijacked what was called ŌĆ£ChristianityŌĆØ in the time of the Roman Empire, launching a counterfeit that is with us to this day.

But now, in the end time, with GodŌĆÖs final Work taking shape, SatanŌĆÖs last-ditch goal is to ŌĆ£take outŌĆØ those who are qualifying to replace him and his demons in ruling over Earth!

Satan probes each of us, looking for weakness: Lust? Temper? Self-will? Vanity? Since we all have vanity in us (Psa. 39:6), he may tempt us to see if the mental drug of conspiracy theories will scratch an itch to feel special and superior. And, as mentioned, once a person is hooked, full recovery is nearly impossible.

Brethren, determine to stay far away from this unbalanced, un-Christian, destructive mindset. Focus on seeking GodŌĆÖs kingdom. Recognize that there is more than enough evil to ŌĆ£sigh and cryŌĆØ over (Ezek. 9:4)ŌĆöand to resistŌĆöright out in the open.

Do not let Satan inject the conspiracy drug into you!