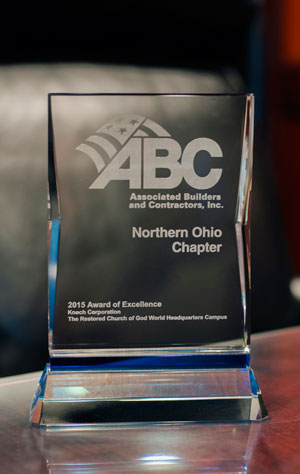 The World Headquarters Campus of The Restored Church of God received an Associated Builders and Contractors (ABC) Excellence in Construction Award for the northern Ohio chapter on November 20, 2015. This award was shared with Knoch Corporation, which served as the general contractor of the project. ABC bills the competition as the ŌĆ£premier annual awards programŌĆØ for the industry and ŌĆ£constructionŌĆÖs highest honor.ŌĆØ

A panel of industry experts, which included owners, architects, engineers and other industry leaders, judged the contest. The group took into consideration the uniqueness of the ChurchŌĆÖs building project, the safety of the construction job, and photos of the completed site.

ABC, which has 70 chapters across the nation, encourages members to work safely, ethically, profitably and for the betterment of the community. The Restored Church of God is pleased to be able to improve Wadsworth, Ohio, both through supporting the local economy and beautifying the area.