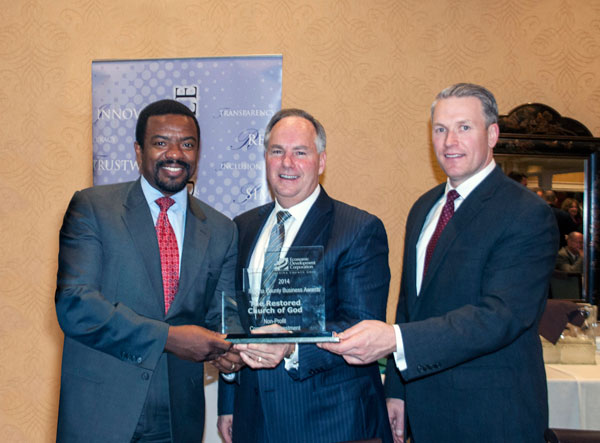 On October 30, 2014, The Restored Church of God received the 2014 Medina County Business Award for Non-profit Community Investment from the Medina County Economic Development Corporation. The corporation oversees economic growth in Medina County in which the ChurchŌĆÖs headquarters is located.

ŌĆ£This award honors a Medina County non-profit organization which made a capital investment of more than $250,000 during calendar year 2013 that has enhanced Medina CountyŌĆÖs quality of life by expanding, building or renovating a structure in the county,ŌĆØ the corporationŌĆÖs website stated.

The award was given at a ceremony held at the Blair Center in Westfield Center, Ohio. Those accepting the award included members of the ChurchŌĆÖs public communications team: Mr. Gregory Kaidannek, Mr. Edward Winkfield, and Dr. James Pastor.

Many were surprised by the investment that the Church has made to its home city of Wadsworth, which is in Medina County, and the economic benefits it has provided to the surrounding area. Its well-manicured campus, stately buildings, agriculture program, and sustained growth model throughout the years have substantially contributed to the development of the region.

The Church is honored to give back to Medina County, which for the past 20 years has been the county with the most rapid growth in Northern Ohio. Both it and the city of Wadsworth have been a great help in realizing the plans for The Restored Church of GodŌĆÖs World Headquarters Campus.