Ribbon-cutting for The Restored Church of God Hall of Administration

Wadsworth, OH ŌĆō June 21, 2013 ŌĆō The Restored Church of God┬« held a very special ribbon-cutting ceremony today for its new Hall of Administration building. The ceremony took place under a beautiful summer sun, and those in attendance included numerous city officials, members of the community, representatives from the Chamber of Commerce, contractors, vendors, members from local media and teenagers from around the world who are in the United States attending Ambassador Youth Camp (AYC), the annual summer camp for the children of Church members.

The Headquarters staff, now numbering close to 100, also attended the event and helped provide the support for all of the activities. Congressman Jim Renacci (R-OH 16th district), the former mayor of Wadsworth (2004-2008), addressed the audience seated under two large tents to shield them from the sun. As a private citizen serving on the Wadsworth Board of Zoning Appeals, Congressman Renacci created the zoning environment that paved the way for the development of the World Headquarters campus. Also on the program and representing the current mayor Robin Laubaugh was the Wadsworth City Council President Tom Palecek. Mayor Laubaugh, who has been extremely helpful in the ChurchŌĆÖs efforts to develop the campus, was unable to attend due to the birth of a new grandchild in another state.

David C. Pack delivers the keynote address at the ribbon-cutting ceremony for the Hall of Administration.

In his keynote address, Mr. David C. Pack, President and Pastor General of The Restored Church of God, shared some history of the Church, along with explaining the grand vision for the Headquarters campus. He explained that, in late 2007, a property he had driven past for years in Wadsworth, he suddenly saw as perfect for all of the ChurchŌĆÖs rapidly expanding needs, meaning five buildings it would have to contain. He envisioned a shimmering jewel befitting the Great God that would be visibleŌĆöas a biblical ŌĆ£city set on a hillŌĆØŌĆöto literally hundreds of thousands every day on highways passing either side of what would become our ŌĆ£lower campus.ŌĆØ

At the reception that followed the ceremony, there was an air of genuine excitement that the city would benefit greatly from what was taking place. Soon, hundreds of employees will join the 100 who are already here. 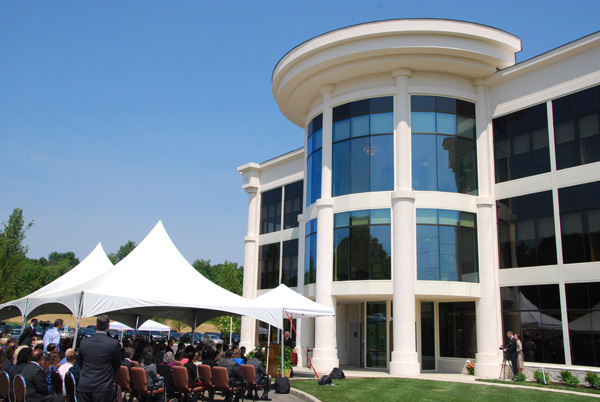 The first of five campus structures, the Hall of Administration is an elegant 40,000-square-foot building that houses the main administrative offices and operations of The Restored Church of God. The structure represents an achievement in design, construction and technology, and is unique in the region. Its four levels contain a mix of elegance, modernity and technological innovation. Four beautiful chandeliers hang in the buildingŌĆÖs signature north and south towers on the second and third floors. Throughout the structure, 605 very long window panes allow natural light to brighten interior offices and meeting spaces. Natural light spectrum fluorescent fixtures provide a vibrant work environment for the interior offices as well. Befitting the quality of the God we serve, the nearly 300,000 square feet of wall space is lined with over four miles of wood trim. To allow for maximum connectivity within and between multiple departments, 10 miles of Category 6 data cable and three miles of fiber optic cable were also laid throughout the building.

According to Mr. Pack, ŌĆ£Many additional elements of the campus are quickly coming together, with more trees, gardens, and sod being installed each week. Exterior work outside the Hall of Administration on the eastern side is also taking shape. The developing landscape has approximately 4.5 miles of pipeline buried beneath the surface to irrigate the rolling grounds. Water from our own spring enables us to maintain the green turf and sustain many towering trees, lush plants and flowers through the hot summer months without the enormous cost of water this many acres and plants would require. We have coined a phrase to describe the setting: ŌĆśThe Garden of Eden is open for business again!ŌĆÖŌĆØ