WADSWORTH, Ohio ŌĆō October 16, 2009 ŌĆō The True Jesus Christ ŌĆō Unknown to Christianity is the latest book by David C. Pack to be made available through some of the worldŌĆÖs largest online booksellers, including Amazon, Barnes & Noble, and Books-A-Million. 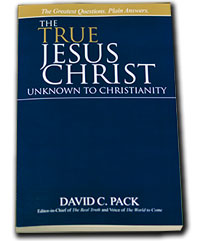 This promotional text appears on the bookŌĆÖs cover, affording a glimpse of its contentsŌĆ”

ŌĆ£Through the centuries, Jesus Christ has been depicted in countless history books, novels, pieces of art, television programs, and feature films. Billions of adherents, who profess Him ŌĆśLord and Savior,ŌĆÖ have erected hundreds of thousands of churches in His name. He is known in nearly every culture of the world, whether one professes to be Christian, atheist, or any other religion.

ŌĆ£Yet, despite worldwide recognition, despite billions claiming to be His followers, despite all the knowledge circulating about Him, Jesus Christ remains unknownŌĆöeven to Christianity!

ŌĆ£The Bible speaks of ŌĆśJesus Christ,ŌĆÖ but also warns of ŌĆśanother Jesus.ŌĆÖ Almost impossible to believe, nearly all worship the wrong one! How can you know the differenceŌĆöhow can you discern which is which?

ŌĆØThe True Jesus Christ ŌĆō Unknown to Christianity accurately examines the life, ministry, and teachings of the most influential Person in the history of the world. Excluding popular tradition, theory, and opinionŌĆöthe usual approach to His lifeŌĆöit takes you on an extraordinary and gripping journey through the corridors of the life and times of Jesus Christ, and plainly answers the greatest questions about HimŌĆöstraight from the Bible and history.