WADSWORTH, Ohio ŌĆō June 24, 2009 ŌĆō Saturday or Sunday ŌĆō Which Is the Sabbath? and America and Britain in Prophecy, by David C. Pack, have been added to the list of books now available through leading online booksellers. 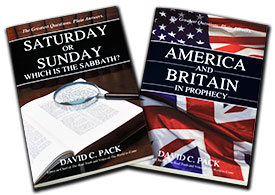 Saturday or Sunday ŌĆō Which Is the Sabbath?: ŌĆ£The ŌĆśSaturday or SundayŌĆÖ question has been one of mankindŌĆÖs most contested issues, sparking great controversy and terrible violence through the centuries. Theologians and ministers of every background and theology have offered their opinion regarding the Christian Sabbath, with the assumption that traditional, orthodox Christianity is the place to begin the discussion.

ŌĆ£This book clearly explains which day should be observedŌĆöstraight from the pages of the Bible!ŌĆöbreaking through every false assumption.

ŌĆ£Saturday or Sunday ŌĆō Which Is the Sabbath? is the strongest book ever written proving which day is the true Sabbath, why and how we must keep it today, and how it is directly connected to the very purpose of your existence!ŌĆØ

America and Britain in Prophecy: ŌĆ£The most educated, prosperous, and influential civilizations have all come and gone. The pattern of history is that Rome, Egypt, Babylon, Greece, Persia, and other powerful, developed empires, rose to dizzying heights before crumbling and final collapse.

ŌĆ£Suppose you could know the conclusion of world events and the future courses of great nations in advanceŌĆöincluding the United States and Britain? What if the future of great nationsŌĆöindeed the greatest nationsŌĆöcould be known? In other words, imagine knowing how future events will affect you, and every human being, personally.

ŌĆ£Worsening conditions, including terrorism, war, famine, disease, soaring food and energy costs, as well as economic upheaval and political division, have left people confused, uncertain of where to turn for answers. The governments and leaders of the West do not know how to solve mankindŌĆÖs problems or that world-shattering changes are just over the horizon.

ŌĆ£The ultimate future of the American and British peoples is astounding, with their greatest period of prosperity and peace yet ahead. But this time will not come as their leaders, planners, and thinkers might hope.ŌĆØ