This website requires the use of Javascript to function correctly. Performance and usage will suffer if it remains disabled.
How to Enable Javascript
War in Ukraine Fuels Fears Among Draft-age Russian Youths 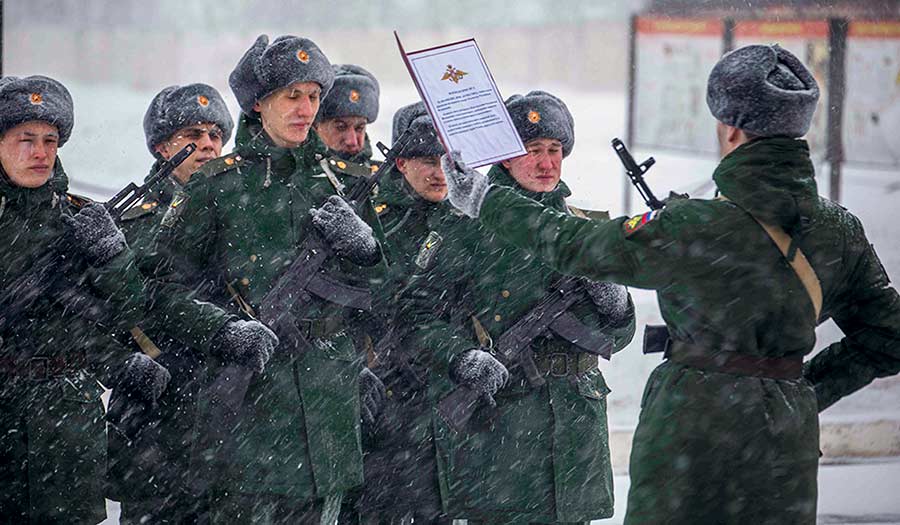 The Associated Press – As Moscow’s forces bog down in Ukraine, many young Russians of draft age are increasingly jittery about the prospect of being sent into combat. Making those fears particularly acute is an annual spring conscription that begins Friday and aims to round up 134,500 men for a one-year tour of military duty.

Defense Minister Sergei Shoigu pledged at a meeting of the military brass this week that the new recruits will not be sent to front lines or “hot spots.”

But the statement was met with skepticism by many in Russia who remember the separatist wars in the southern republic of Chechnya in the 1990s and early 2000s, when thousands of poorly trained young men were killed.

“I don’t trust them when they say they won’t send conscripts into combat. They lie all the time,” said Vladislav, a 22-year-old who is completing his studies and fears he could face the draft immediately after graduation. He asked that his last name not be used, fearing reprisals.

All Russian men aged 18-27 must serve one year in the military, but a large share avoid the draft for health reasons or deferments granted to university students. The share of men who avoid the draft is particularly big in Moscow and other major cities.

Even as President Vladimir Putin and his officials say that conscripts are not involved in what Russian authorities call “the special military operation in Ukraine,” many appeared to have been taken prisoner during its initial days. Videos emerged from Ukraine of captured Russians, some being shown calling their parents, and were put on social media.

The mother of one of the prisoners said she recognized her 20-year-old draftee son in a video even though he was shown blindfolded.

The Defense Ministry was forced to walk back its statements and acknowledge that some conscripts were sent to Ukraine “by mistake” and were taken prisoner while serving with a supply unit away from the front.

There have been allegations that before the invasion, some conscripts were forced to sign military contracts that allowed them to be sent into combat—duty that is normally reserved only for volunteers in the army. Some of the captured soldiers said they were told by their commanding officers that they were going to a military exercise but suddenly found themselves fighting in Ukraine.

Lyudmila Narusova, a member of the upper house of the Russian parliament, spoke in early March about an entire company of 100 men who were forced to sign such contracts and were sent into the combat zone—and only four survived. Military officials did not comment on her allegation.

Svetlana Agapitova, the human rights commissioner in St. Petersburg, said Wednesday that relatives of seven soldiers had written to her to complain the men had been forced to sign the contract and sent to Ukraine against their will. She said two of them already had been brought back to Russia.

In recent years, the Kremlin has emphasized increasing the share of volunteer contract soldiers as it sought to modernize the army and improve its readiness. The force of 1 million now has over 400,000 contract soldiers, including 147,000 in the infantry. If the war drags on, those numbers could be insufficient to sustain the operations.

The Kremlin could eventually face a choice: Keep fighting with a limited number of troops and see the offensive stall, or try to replenish the ranks with a broader draft and risk public outrage that could fuel anti-draft sentiment and destabilize the political situation. Such a scenario occurred during the fighting in Chechnya.

Dmitry, a 25-year-old IT expert, has a deferment that should keep him out of the draft for medical reasons. But he is still nervous like many others, fearing authorities could abruptly waive some deferments to bolster the military.

“I hate the war. I think it’s a total disaster,” said Dmitry, who also asked that he not be identified by his last name, fearing reprisals. “I fear that the government could change the rules and I could face the draft. They also were saying for months that they wouldn’t attack Ukraine, so why should I trust what they say about the draft now?”