This website requires the use of Javascript to function correctly. Performance and usage will suffer if it remains disabled.
How to Enable Javascript
Aftershocks Rattle New Zealand 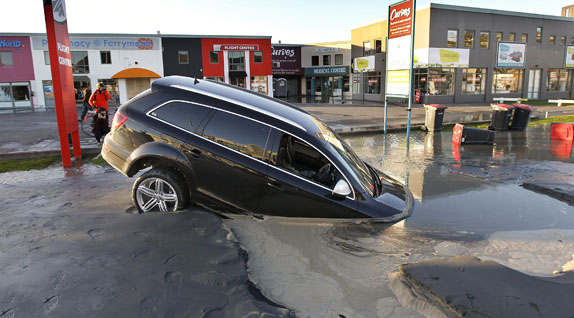 Almost four months after a devastating earthquake rocked New Zealand, killing 181 people, powerful aftershocks continue to affect the area. The most significant occurred June 13, including a 5.5-magnitude that hit near the city of Christchurch at 1:00 p.m., followed by a 6.0-magnitude aftershock at 2:20 p.m.

“Their combined seismic weight took down at least another 50 buildings in the immediate city and caused much liquefaction to bubble up again on the eastern side of what used to be known as New Zealand’s Garden City,” The Christian Science Monitor reported.

The tremors left 54,000 homes without power, cut phone lines, and closed supermarkets. While no fatalities were reported, at least 10 people were injured.

“It is another blow to Christchurch residents, who have already endured so much,” New Zealand Prime Minister John Key stated in the Guardian.

“The region has been hit by dozens of earthquakes since a magnitude 7.1 quake in September last year, which caused widespread damage but no fatalities,” the newspaper reported.

Video footage by Sky News showed a resident expressing concern for her family’s safety: “I’m scared, we all are going to think about whether we stay here or not because we can’t bring up our kids in an atmosphere where…they are frightened to go home, to go out, to be with their friends…” she said.

“It seems like they are going to keep happening,” Australian seismologist David Jepson stated in an Agence France-Presse article. “Since they had that really big earthquake it seems to me like it activated all these different faults.”

Japan: Living with Disasters
What can the world learn from the nation’s ability to accept natural disasters as a normal part of life?