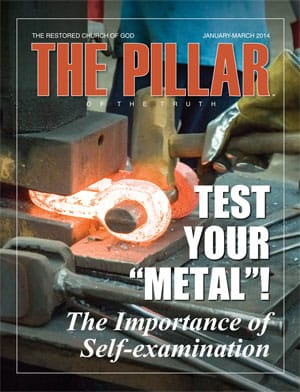 Why do trialsŌĆöoften extremely difficult testsŌĆöseem to come in the weeks and days leading up to Passover? There is a reason!

Nobody likes or welcomes trials when they come. It is hard to ŌĆ£count it all joy when you fall into divers [various] temptationsŌĆØ (Jms. 1:2). Yet troubles, trials, difficulties and persecutions are part and parcel of true Christianity. If you have been in GodŌĆÖs Way for any length of time, you have experienced your share of tribulations. Some are more difficult than others. Indeed, we are told that ŌĆ£we must through much tribulation enter into the kingdom of GodŌĆØ (Acts 14:22).

While they can and do come at different times, the most severe trials can seem to occur during the weeks and days leading up to Passover. So much that, in the Church of God, we often talk about our ŌĆ£pre-Passover trials.ŌĆØ

They can come (seemingly one after another) in many forms: family problems, financial troubles, difficulties at work, car or home appliance repairs, health issues, personal weaknesses flaring up, problems with brethren, and so on. You can recount your own. Additionally, major trials for the entire Church have frequently occurred prior to the Passover.

Why does Satan increase his attacks on the brethren and the ChurchŌĆöand why does God allow itŌĆöas we approach this annual reminder of ChristŌĆÖs sacrifice?

When trials come, we would do well to remember this instruction: ŌĆ£Beloved, think it not strange concerning the fiery trial which is to try you, as though some strange thing happened unto you: But rejoice, inasmuch as you are partakers of ChristŌĆÖs sufferingsŌĆØ (I Pet. 4:12-13).

Stop to consider how much our Elder Brother endured. Knowing the severe trial that was coming, Jesus was driven to intense prayer to the Father. He hoped for support and comfort from Peter, James and John, yet they let Him down. He was betrayed with a kiss from Judas, whom He called ŌĆ£friendŌĆØŌĆöone who had been with Him from the beginning of His ministry. How terrible that must have felt!

Christ was arrested, treated as a common criminal and hauled before a court of His own countrymen. Think of it! The Creator of mankind on trialŌĆöfalsely accused, lied about and interrogated through the night by those He created! They spat in His face and blindfolded, beat and mocked Him, declaring that He blasphemed and was worthy of death. This He faced alone, through the night, with the disciples having fled and Peter having vehemently denied that he even knew Him. Christ was keenly aware of this (Luke 22:61). Imagine how that must have felt!

As painful as this was, it was only a foretaste. A long, grueling trial was just beginning.

When morning came, the religious leaders boundŌĆöhandcuffedŌĆöJesus, delivering Him into the hands of Pontius Pilate, a Roman governor. He endured further questioning from Pilate and more accusations from the chief priests and elders. Then the Roman governor, hoping to shift responsibility, sent Jesus off to Herod. He endured even more accusation, was questioned by Herod, and was mocked and treated with contempt by HerodŌĆÖs soldiers.

Afterward, Christ was sent back to Pilate. Seeking to release Him, as it was customary to release a prisoner at the time of the Passover, Pilate assembled the priests and elders, telling them, ŌĆ£You have brought this Man unto me, as one that perverts the people: and, behold, I, having examined Him before you, have found no fault in this Man touching those things whereof you accuse Him: No, nor yet Herod: for I sent you to him; and, lo, nothing worthy of death is done unto Him. I will therefore chastise Him, and release HimŌĆØ (Luke 23:14-16).

But the leaders of the people would not have it. Instead, they cried aloud, saying, ŌĆ£Away with this ManŌĆ”Crucify Him, crucify HimŌĆØ (vs. 18, 21), and stirred up the assembled crowd. Preferring a common criminal, they demanded that Barabbas, a thief and murderer, be released to them. Thus, Christ came ŌĆ£unto His own, and His own received Him notŌĆØ (John 1:11).

His trial grew worse, being scourgedŌĆöwhippedŌĆöwith a cat-o-nine tails, the flesh torn and ripped from His body by soldiers who excelled in this practice. Christ was stripped of His clothes and endured more mocking, humiliation and spittle from the mouths of His tormentors. A crown of thorns was thrust upon His head, piercing His flesh and bringing sharp, intense pain.

He was made to bearŌĆöcarryŌĆöthe very instrument of His death on the way to being crucified with thieves, thus being ŌĆ£numbered with the transgressorsŌĆØ (Isa. 53:12). As He hung naked on the stake, life slowly ebbing from His body, He received no respite from the cruel mocking of those assembled round about. His last moments of physical life echoed with the taunts of those ŌĆ£wagging their heads, and saying, Ah, You that destroy the temple, and build it in three days, save Yourself, and come down from the crossŌĆ”He saved others; Himself He cannot save. Let Christ the King of Israel descend now from the cross, that we may see and believeŌĆØ (Mark 15:29-32). And ŌĆ£ŌĆ”they parted [His] raiment among them, and for [His] vesture they did cast lotsŌĆ”ŌĆØ (John 19:24).

Christ now found Himself aloneŌĆöcut offŌĆöcrying out, ŌĆ£Eloi, Eloi, lama sabachthani?ŌĆ”My God, My God, why have You forsaken Me?ŌĆØ (Mark 15:34). With a spear then thrust into His side, His blood poured out, Christ drew His last breath.

His trial was over. The One who was God, existing from eternity with the Father, became sin for us (II Cor. 5:21).

Satan had sought to overcome JesusŌĆöto break His will, His commitment to God and the plan that had been laid out long ago. Yes, the adversary brought this tremendous trial, hoping the Son of God would failŌĆöand the Father allowed it: ŌĆ£For it became Him, for whom are all things, and by whom are all things, in bringing many sons unto glory, to make the captain of their salvation perfect through sufferingsŌĆØ (Heb. 2:10). By enduring His own drawn-out trial, leading up to His being offered as our Passover sacrifice, the captain of our salvation was made ŌĆ£perfect through sufferings.ŌĆØ

And ŌĆ£ŌĆ”in the days of His flesh, when He had offered up prayers and supplications with strong crying and tears unto Him that was able to save Him from death, and was heard in that He feared; though He were a Son, yet learned He obedience by the things which He suffered; and being made perfect, He became the author of eternal salvation unto all them that obey HimŌĆØ (5:7-9).

Following in His Steps

Recall that we are to partake of ChristŌĆÖs sufferings: ŌĆ£For even hereunto were you called: because Christ also suffered for us, leaving us an example, that you should follow His stepsŌĆØ (I Pet. 2:21).

Can our Christian walk be any different? Should we expect to escape trials, tribulations or sufferings?

No. The example that was set, the one we are to follow, is one of enduringŌĆöcome what may. Truly, ŌĆ£For unto [us] it is given in the behalf of Christ, not only to believe on Him, but also to suffer for His sakeŌĆØ (Phil. 1:29).

Do you grasp that? It has been given to us on behalf of Jesus ChristŌĆöwho suffered on our behalfŌĆöto, in turn, suffer for Him.

Just as Satan tried to defeat our Elder Brother, so too will he try to defeat us. He does not want us to escape from his grasp. He desperately wants us to remain in our sins. He knows that Christ overcame him, and he knows that we can as well, through ChristŌĆÖs sacrifice. Is it any wonder then that, as we come to the Passover, the devil increases his attacks on GodŌĆÖs begotten children?

The devil, ŌĆ£as a roaring lion, walk[ing] about, seeking whom he may devourŌĆØ (I Pet. 5:8), specifically times his attacks on us. Often he does this where it hurts the worst, and at times it comes from those who are closest to us. He shoots fiery darts (doubts) (Eph. 6:16), probing for and targeting our weaknesses, attempting to destroy our faith. His goal is to make it as difficult as he possibly can, sometimes bringing a series of trials like waves crashing on the shore to try to erode our character and break our resolve and commitment to God. The adversary sets out to overwhelm and discourage you, hoping that you will give up the fight.

From him come feelings of hopelessness, despondency, depression and uselessness. He will attempt to broadcast into your mind doubts about your conversion and about whether you should take the Passover and renew your commitment to God and Christ. He does not want you to make it! Resolve steadfastly to resist him (I Pet. 5:9), to ŌĆ£fight the good fight of faithŌĆØ (I Tim. 6:12) by using these opportunities for self-examination, and to shore up your weaknesses.

Remember: ŌĆ£There has no temptation taken you but such as is common to man: but God is faithful, who will not suffer (allow) you to be tempted above that you are able; but will with the temptation also make a way to escape, that you may be able to bear itŌĆØ (I Cor. 10:13). None of us have ŌĆ£resisted unto blood, striving against sinŌĆØ (Heb. 12:4).

Enduring pre-Passover trials is the pattern Christ left for us. He escaped His trials and, being perfected, has qualified to replace Satan on the throne of Earth.

By allowing trials to come, the same purpose is being worked out in us by ŌĆ£the God of all grace, who has called us unto His eternal glory by Christ Jesus, [and] after that [we] have suffered a while, [will] make [us] perfect, establish, strengthen, settle [us]ŌĆØ (I Pet. 5:10). Through these Passover trials, we are to ŌĆ£know Him, and the power of His resurrection, and the fellowship of His sufferings, [to be] made conformable unto His deathŌĆØ (Phil. 3:10).

Prior to the most difficult time Jesus would ever face, He prayed these words, ŌĆ£O my Father, if it be possible, let this cup pass from Me: nevertheless not as I will, but as You willŌĆØ (Matt. 26:39). GodŌĆÖs will was that He had to endure these horrible events. There was no other way. Neither can there be for usŌĆöwe must endure our own Passover trials and allow God to perfect us.

ŌĆ£Wherefore seeing we also are compassed about with so great a cloud of witnesses [examplesŌĆöof which Christ would be considered the ultimate], let us lay aside every weight, and the sin which does so easily beset us, and let us run with patience the race that is set before us, looking unto Jesus the author and finisher of our faith; who for the joy that was set before Him endured the cross, despising the shame, and is set down at the right hand of the throne of God. For considerŌĆØŌĆöyes, considerŌĆöŌĆ£Him that endured such contradiction of sinners against Himself, lest you be wearied and faint in your mindsŌĆØ (Heb. 12:1-3).

As we anticipate another Passover, we can do no less.