Though the electronic version of The Bible‚Äôs Greatest Prophecies Unlocked! is free, we do not at this time mail this 574 page book. Those who wish to read the print edition of the book may wish to order it from Amazon.com. 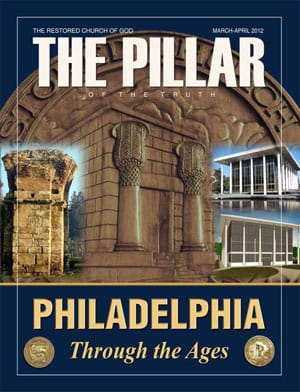 Jesus said, ‚ÄúI will build My Church‚Ä¶‚ÄĚ There is a single organization that teaches the entire truth of the Bible, and is called to live by ‚Äúevery word of God.‚ÄĚ Do you know how to find it? Christ said it would:

Your place in the God Family hangs on truly discerning them!

‚ÄúAnd God said, Let Us make man in Our image, after Our likeness: and let them have dominion over the fish of the sea, and over the fowl of the air, and over the cattle, and over all the earth, and over every creeping thing that creeps upon the earth.

Man was formed out of the dust of the ground. Even though he was a perfect creation, physically, he was not yet complete. What man lacked was God‚Äôs holy and perfect character. That part of the fashioning and developing is still occurring today. Do we truly understand this process? God wants us to comprehend His great Plan!

(1)‚ÄāThrough whom were all things created? Ephesians 3:9. See also Colossians 1:16.

As the physical creation process began with Christ, so also does the spiritual.

(2)‚ÄāIs God‚Äôs transcendent purpose to recreate His own kind? Hebrews 2:9-10.

The meaning of life was first revealed to Adam in the Garden of Eden. But Adam, as well as the majority of humanity, has never really understood what God has in mind. In Old Testament times, only a very few had knowledge of this purpose. Among them was Noah, known as a preacher of righteousness. (See II Peter 2:5.)

After the Flood, God began working with Abraham, a man of great faith and obedience. It was not until approximately 1500 BC, however, that God began to reveal His Plan in greater detail.

It was not because of any greatness or goodness of its own that God chose Israel, but rather because of the promises He had made to the nation‚Äôs forefathers, Abraham, Isaac and Jacob. Through this captive people, the Creator desired to reveal His purpose, laws and blessings for all mankind.

(6)‚ÄāAfter the mighty Egyptian empire had almost been destroyed by nine plagues from God, what did He instruct Moses and Aaron to do? Exodus 12:3, 5-12.

One final, horrendous plague would be unleashed upon the Egyptians‚ÄĒall the firstborn would be slain.

(7)‚ÄāWas Israel spared from this plague only by following God‚Äôs detailed instructions? Exodus 12:13.

The physical act of painting lamb‚Äôs blood on the doorposts was a forerunner to the ultimate fulfillment in AD 31 when the Lamb of God‚ÄĒJesus Christ‚ÄĒbecame our Passover.

(8)‚ÄāHas mankind come under the death penalty? Romans 3:23. Does the transgression of God‚Äôs laws cut us off from Him? Romans 6:23.

Before we can have any hope of receiving eternal life, the penalty of death must be removed.

(9)‚ÄāWhat is the only way the death penalty can be lifted? Colossians 1:14.

Every human being has broken God‚Äôs laws‚ÄĒhas sinned (I John 3:4). To redeem us from eternal death, the Son of God had to die because only His life was worth more than the sum total of all human lives.

Christ‚Äôs blood does not ultimately save us. It pays, in full, the penalty of past sins. It reconciles us to God and justifies us in His sight. Therefore, the Passover must come first in God‚Äôs Plan of salvation. (Verse 10 shows that we are saved by Christ‚Äôs life.)

The Passover is the first of God‚Äôs annual festivals. Because the world has been in rebellion against God, those who observe pagan holidays do not understand the reason for Christ‚Äôs sacrifice.

As the time drew near for Him to be sacrificed, the Passover took on its greatest and fullest dimensions. Christ would instruct His disciples how to observe it annually following His death.

(13)‚ÄāAs they were eating the Passover lamb, did Jesus institute a new ordinance? John 13:1-5.

In the Old Testament, the footwashing ceremony was not part of the Passover observance. It was instituted by Jesus Christ Himself when He was on Earth.

(14)‚ÄāWhat was the purpose of footwashing? Did Christ explain its meaning and significance after Peter initially refused to let Christ wash his feet? John 13:12-14.

Most people wore open-toed shoes at the time, which made their feet dirty. Washing someone‚Äôs feet was a menial task that only lowly servants performed. Yet Jesus Christ did this‚ÄĒsetting an example for us to follow‚ÄĒand showing that He came to Earth to serve all mankind.

The next day, Christ would prove the extent of that service when He gave His life as a ransom for all‚ÄĒdemonstrating how far He was willing to go for the sake of humanity.

Footwashing teaches us an important lesson. This is why it must come first in the Passover ceremony. We must have the attitude of a humble servant.

(16)‚ÄāImmediately after the footwashing, did Jesus introduce the new symbols of bread and wine? Matthew 26:26-29.

The Old Testament Passover was always eaten with unleavened bread (leavening pictures sin). It represented‚ÄĒsymbolically‚ÄĒChrist‚Äôs sinless body, which was to be broken. Before pouring out His blood to pay for our sins, Jesus Christ was scourged. It was such a horrendous beating that He literally became unrecognizable. ‚Äú‚Ä¶His visage [appearance] was so marred more than any man, and His form more than the sons of men‚ÄĚ (Isa. 52:14). No human being has ever suffered as He did.

The unleavened bread that was broken at His last Passover supper is a symbol of His broken body.

Jesus willingly suffered this excruciating torture in order for us to receive physical healing of our bodies. It is through His broken body that we receive forgiveness of our physical sins. It is by His stripes that we are healed. (To understand this subject in greater detail, read The Truth About Healing.)

(19)‚ÄāFollowing Christ‚Äôs instructions to eat this bread, what was the next ordinance He instituted? Matthew 26:27-28.

Its meaning is clear. The wine pictures His blood, which is shed for the forgiveness of spiritual sins.

The conversation between Philip and the Ethiopian eunuch detailed in Acts shows that Isaiah was describing Christ (Acts 8:32, 34-35).

(21)‚ÄāAfter Jesus had been savagely beaten, was He led out of the city to Golgotha carrying His own stake? Hebrews 13:12 and Mark 15:22.

At Golgotha, huge spikes were mercilessly hammered through His hands and feet, pinning them to the stake. The wooden pale was hoisted upright, causing excruciating pain.

Jesus died when a spear was thrust into His side, slicing through His flesh, blood vessels, and organs. It was at this point that He cried out and breathed His last breath (Matt. 27:50).

The time sequence of the moments surrounding Christ‚Äôs death is covered extensively in the inset ‚ÄúDid Jesus Die of a ‚ÄėBroken Heart‚Äô?‚ÄĚ found in chapter nine of the book The True Jesus Christ ‚Äď Unknown to Christianity.

(23)‚ÄāWhy did the Creator of all mankind institute these most important symbols of bread and wine? Luke 22:19-20.

We must never forget the Being who paid the price for our sins.

(24)‚ÄāHow important is it that Christians partake of these symbols every year? John 6:53-54.

Unless we partake of these symbols, we have no hope of receiving eternal life.

(25)‚ÄāMust we examine ourselves to ensure that we take the Passover in a worthy manner? I Corinthians 11:29.

Taking the Passover in a casual or unworthy manner makes light of Christ‚Äôs suffering, and shows that one does not take the forgiveness of sins and God‚Äôs healing seriously.

(27)‚ÄāDid the apostle Paul instruct the Corinthians to take the symbols of bread and wine? I Corinthians 11:23-26.

Christians today must also observe the Passover in remembrance of Christ‚Äôs death. It is a memorial‚ÄĒthe most solemn occasion of the year.

(28)‚ÄāAfter receiving forgiveness, must we continue to put sin out of our lives‚ÄĒto strive to live a sinless life just as Christ did? Hebrews 12:1. Did Jesus Christ Himself state that His followers are to strive to become perfect? Matthew 5:48.

(29)‚ÄāDoes the Feast of Unleavened Bread, which follows the Passover, picture this aspect of a Christian‚Äôs life? I Corinthians 5:7-8.

These days were commanded in the Old Testament well before the Law was given to the Israelites at Mount Sinai. They continue to be a constant reminder that escaping the bondage of sin is an ongoing process‚ÄĒa full-time job.

The sacrifice of His Son, Jesus Christ, began God‚Äôs monumental Plan of salvation for this world.

What does He expect of us in return? He requires that we surrender to Him 100 percent‚ÄĒputting forth every effort to overcome our human nature and learning to more perfectly obey His Commandments.

We cannot earn salvation. But God expects us to do our part so that we can qualify to become like Him and live with Him in glory for all eternity!