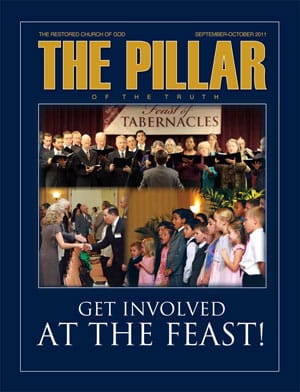 The Feast of Tabernacles

Foreshadow of the Millennium

God specifically commands us to observe His seven annual Holy Days to keep us focused on His great Plan of salvation. These days help us stay on the path toward joining Jesus Christ and the Father in the Family of God.

When Jesus was on Earth, He announced the good news of the coming kingdom of God. The Feast of Tabernacles pictures that kingdom, a time when the government of God, under the reign of Christ, will rule the earth. This will be only the beginning of the continual expansion of GodŌĆÖs government, during which the saints of the First Resurrection will be trained for even greater things ahead.

Every year, we all look forward to keeping the Feast of Tabernacles, a highlight of every true ChristianŌĆÖs calendar. Keeping it reminds us of the joyous utopian time of peace and prosperity that will soon come.

LetŌĆÖs review some basic scriptures about this festival.

God makes it clear that we are to keep this Feast. Specifically, He commands us to rejoice during these seven days. We are to look forward to the most joyful occasion of all time, when GodŌĆÖs government will be established on Earth. By the account in Zechariah 14, we know that those in the Millennium will be keeping the Feast, confirming that it is to be observed forever.

(2) The Old Testament provides many examples of Israel keeping the Feast. Did SamuelŌĆÖs parents keep the Feast of Tabernacles? I Samuel 1:3. After Solomon dedicated the Temple, was the Feast observed? I Kings 8:1-2, 65-66. When the Jews returned from captivity in the time of Ezra and Nehemiah, did they keep the Feast? Nehemiah 8:17-18.

SamuelŌĆÖs parents kept the Feast every year. One year, during this time, Hannah prayed to God for a son and He intervened, granting her a child. Her son Samuel would become a great servant of God.

Also, after the dedication of the Temple, Israel kept the Feast of Tabernacles and went home after ŌĆ£the eighth dayŌĆØ (I Kings 8:66).

When those who returned to Jerusalem after the 70 years in Babylonian captivity learned about the Feast again, they kept it with great gladness. They were excited to know GodŌĆÖs truth and overjoyed to be able to keep His Commandments and statutes. Consider in the world tomorrow how great the rejoicing will be when the whole world will know the importance of these days and will keep them!

(3) What evidence does the New Testament provide that Christ and the first-century apostles kept the Feast of Tabernacles? John 7:1-2, 8-11; Acts 18:21.

Since the vast majority of the readers of JohnŌĆÖs gospel were not Jews, it was necessary to use the phrase ŌĆ£the JewsŌĆÖ Feast of Tabernacles.ŌĆØ ChristŌĆÖs actions solidify the command to keep the Feast as He charged His physical family to keep it in verse 8. In verse 10, He also went to keep the Feast. Even though religious leaders sought to kill Him, He was not deterred from keeping it (vs. 14)ŌĆöleaving us without any excuse to not observe these important days.

The Feast to which Paul was referring could have only been the Feast of Tabernacles. The timeline of PaulŌĆÖs travels proves this. He arrived in Corinth (Acts 18:1) and stayed at the home of Justus for 18 months (vs. 11), and then traveled to Jerusalem, where he arrived in the fall of AD 52. Paul clearly saw the need and the importance of keeping the Feast of Tabernacles in JerusalemŌĆöthe headquarters of the Church at that time.

(4) The Feast is commanded to be kept forever, and evidence shows that all of GodŌĆÖs true servants have kept it. Does God also give us specific commands on how to observe the Feast? Leviticus 23:40, 42. Are there provisions made in GodŌĆÖs financial laws so that we are able to keep the Feast? Deuteronomy 14:22-24. In what manner does God command us to observe these days? Deuteronomy 14:26 (last half of the verse).

Ancient Israel was commanded to create a booth, tent or tabernacleŌĆöa basic temporary dwellingŌĆöso they would remember that their ancestors dwelt in booths when God brought them out of Egypt. Today we keep this command by renting hotel rooms or condominiums during the Feast. This is to remind us that this life is temporary and that all of our lifelong dreams, hopes and aspirations should point toward the coming kingdom of God.

Through GodŌĆÖs financial laws, we are shown how to save 10 percent of our yearly income, as second tithe, to use for various Feast expenses. GodŌĆÖs Word makes it abundantly clear that we are to use our second tithe to rejoice before Him (Deut. 14:26).

(5) The Millennium is pictured by the Feast of Tabernacles. What is the Millennium and how long will it last? Revelation 20:4. How does this fit within GodŌĆÖs overall 7,000-year plan? II Peter 3:8; Hebrews 4:3-11.

Peter and Paul both understood GodŌĆÖs 7,000-year plan. In addition to the Feast of Tabernacles, the Sabbath day types ChristŌĆÖs millennial rule. It follows the first six days of the week, which picture 6,000 years of man governing himself with his own ideas and plans. The Church has often used the term ŌĆ£the MillenniumŌĆØ to refer to the 1,000-year rule of Jesus Christ on Earth (Rev. 20:4).

When Christ begins to rule the earth and all of Creation is put under His direct authority, the land, sea and sky will rejoice and celebrate. In addition, mankind will no longer be cut off from the true source of knowledge. All will learn how to live healthy and abundant livesŌĆöthe way God always intended.

(7) Is the Millennium the time to which the apostle Peter referred when he spoke of ŌĆ£the restitution of all thingsŌĆØ? Acts 3:19-21.

Clearly, the Millennium is the only period that could be described as ŌĆ£the times of refreshingŌĆØ and ŌĆ£the restitution of all things.ŌĆØ During his sermon, Peter stated an amazing, but almost entirely unknown, fact that was preached by all of GodŌĆÖs servants: there is coming a ŌĆ£restoration of all things.ŌĆØ However, this restitution has not yet happenedŌĆöit is yet to occur!

(8) What is the greatest thing Christ will restore on Earth when He returns? When Jesus came in the first century, what was He to announce? Mark 1:14, 15.

Christ came to announce a coming change in the way the world would be governed. During His First Coming, Jesus announced that He would return to establish the government of God. When Christ spoke of the coming kingdom, He spoke of the coming government of GodŌĆöa world ruling supergovernment that will bring unprecedented changes to the world. It will usher in what mankind has never been able to accomplish: world peace, happiness, harmony, universal health, and prosperity for all. The greatest thing that has been lacking for the past 6,000 years will once again be restored to EarthŌĆöGodŌĆÖs government, ruled by the God Family.

(9) Christ will be the Supreme Ruler in the coming kingdom. But will He rule alone? Who will rule with Him? Revelation 20:4; Daniel 7:27.

Those whom Revelation 20:4 mentions sitting on thrones ruling with Christ are the same saints mentioned in Daniel 7:27. Believe these verses for what they say! Our ultimate calling as Christians is to rule under Jesus ChristŌĆÖs authority in the kingdom of God, over all nations and people. Christ will be ŌĆ£KING of kings and LORD of lords.ŌĆØ These other kings and lords can be you or anyone who is willing to accept GodŌĆÖs terms for entering His kingdom.

Only at the Resurrection will human beings (all true Christians) be changedŌĆöŌĆ£born againŌĆØŌĆöfrom flesh to spirit, and it is only through this transformation that one can enter the kingdom of God. Those who accept GodŌĆÖs way of lifeŌĆöand endure the trials and tribulations that come with ChristianityŌĆöwill be able to rule with Christ in the world to come.

Christ and the saints will reign over all who are left of the nations after the Great Tribulation and Day of the Lord. These people will enjoy the many benefits of the Millennium.

(11) We look forward to the Feast of Tabernacles with great anticipation each year. The Feast depicts the coming Millennium and, by extension, the kingdom of God. Should this be on our minds only during the Feast? Matthew 6:6-10.

Jesus gave us an instruction to pray ŌĆ£Your kingdom comeŌĆØ in the overview of how we should pray. This small but staggering phrase brings great meaningŌĆöit should be our focus during the Feast and the entire year! A few verses later, Christ states, ŌĆ£But seek you first the kingdom of God, and His righteousness; and all these things shall be added unto youŌĆØ (vs. 33). Christians must continually seek the kingdom of God firstŌĆöabove everything else in their lives!

During the Millennium, the entire world will live the way that produces happiness, peace and every desirable outcomeŌĆöto live as God always intended. We can only appreciate the meaning of the Feast of Tabernacles by following the command to observe this convocation each year!