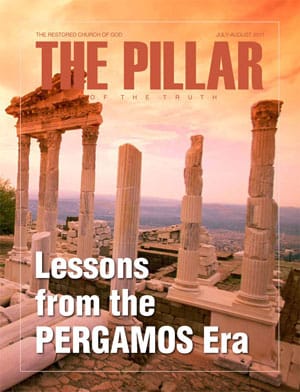 Lessons from the Era of Pergamos

The examples of Christians during this Church era still hold meaning more than 1,000 years later.

The first rays of sunlight bring into view the metropolis of ancient Pergamos, with a skyline dominated by temples, amphitheaters and auditoriums dedicated to a myriad of false gods. A legendary acropolis complex glistens on its hilltop setting.

Amid this cacophony of false religion, a few faithful Christians dwell in the city.

Anyone walking the streets during the prime years of this city would be immediately confronted by a world awash in decadence. Pergamos was home to a renowned school of sculpture, which meant elaborate idols were everywhereŌĆöusually depicting gods in the nude.

In this setting of rank idolatry, it would have been difficult for any true Christian to remain faithful.

As GodŌĆÖs Church grew across Asia Minor, so did a hybrid religion attempting to blend the Bible with the Babylonian Mystery Religion. Both groups called themselves Christians, and both suffered persecution. By AD 300, the persecution had reached fever pitch. Many Roman emperors had made it a mission to hunt down and kill every Christian they could find.

When Roman Emperor Constantine declared religious freedom for the realm, it may have at first seemed like good news. But this only lasted a short while. In 321, he commanded no work be done on Sunday. Then, in 325, he issued an edict that would change all true ChristiansŌĆÖ livesŌĆökeeping the Sabbath was now forbidden.

Constantine declared: ŌĆ£We have directed, accordingly, that you be deprived of all the houses in which you are accustomed to hold your assemblies, and our care in this respect extends so far as to forbid the holding of your superstitious and senseless meetings, not in public merely, but in any private house or place whatsoever.

ŌĆ£Let those of you, therefore, who are desirous of embracing the true and pure religion, take the far better course of entering the Catholic ChurchŌĆ”ŌĆØ (The Life of Blessed Emperor Constantine).

Read between the lines of this edict and realize it is aimed almost solely against Sabbath-keepers. Constantine meant that true Christians should ŌĆ£be deprived of all the houses in which you are accustomed to hold your [Sabbath] assembliesŌĆØŌĆöbe forbidden to hold ŌĆ£superstitious and senseless [Sabbath] meetingsŌĆØŌĆöand give up observing Saturday to ŌĆ£take the far better course of entering the Catholic Church,ŌĆØ which required Sunday-keeping!

With heated persecution against GodŌĆÖs Church increasing, true Christians fled to Armenia. This flight began the third Church era, Pergamos. Much of the trials, persecution and even internal problems in this chapter of Church history contain vital lessons for today.

In the book of Revelation, Christ uses seven cities in an ancient mail route in Asia Minor as types of the eras of His Church. The message to the third era, which occurred from AD 325 to AD 1000 begins with a striking remark: ŌĆ£And to the angel of the church in Pergamos write; These things says He which has the sharp sword with two edges; I know your works, and where you dwell, even where SatanŌĆÖs seat isŌĆØ (Rev. 2:13).

The ancient city of Pergamos, with all its temples and idols, was certainly a type of ŌĆ£SatanŌĆÖs seat.ŌĆØ How much more would this apply to the third Church era, when brethren lived under a government through which Satan influenced both the laws of the land and its religion?

Brethren of this era had to remain faithful in all points of GodŌĆÖs LawŌĆöeven in the face of martyrdom. Christ confirmed this by commending Pergamos: ŌĆ£ŌĆ”and you hold fast My name, and have not denied My faith, even in those days wherein Antipas was My faithful martyr, who was slain among youŌĆ”ŌĆØ (Rev. 2:13).

When the Church fled persecution under the Roman Empire, they settled in the wilderness near ConstantinopleŌĆöthe capital of the empire during that time, and another type of ŌĆ£SatanŌĆÖs seat.ŌĆØ

Having a government that championed the universal church took its toll on true Christians. Even after the time of Constantine, the Roman church fiercely persecuted them. This led brethren to look for ways to ŌĆ£fit in,ŌĆØ causing a number of problems to enter the Church.

Christ rebuked this era for its compromising attitude: ŌĆ£But I have a few things against you, because you have there them that hold the doctrine of Balaam, who taughtŌĆ”the children of Israel, to eat things sacrificed unto idols, and to commit fornicationŌĆØ (Rev. 2:14).

One definition of the doctrine of Balaam is found in Encyclopaedia Britannica: ŌĆ£They [Pergamos-era Christians] permitted external conformity with the dominant Church, and held that Christ would forgive it.ŌĆØ

In time, the act of practicing what they knew to be error soon became ingrained. This compromise caused a searing of their consciences and led to their children following Catholic practices, including attending mass.

Christ warned this era: ŌĆ£Repent; or else I will come unto you quickly, and will fight against them with the sword of My mouthŌĆØ (Rev. 2:16).

The doctrine of Balaam leads to another problemŌĆöa second weakness of the Pergamos era. Notice: ŌĆ£So have you also them that hold the doctrine of the Nicolaitans, which thing I hateŌĆØ (Rev. 2:15).

This doctrine permits individuals to engage in sin. This sort of thinking can be seen in statements such as, ŌĆ£We are only humanŌĆØŌĆöŌĆ£Other people do the same thingŌĆØŌĆöŌĆ£Their church allows them to do this.ŌĆØ

These ideas can still arise today!

This mindset allowed people to become ŌĆ£familiarŌĆØ with sin to the point it became a lifestyle. Many who once were in the Church of God went back to the world by compromising standardsŌĆöthey excused themselves, thinking, ŌĆ£We must not be so conspicuous.ŌĆØ

This thinking is deadly!

The doctrines of Balaam and the Nicolaitans worked in conjunction during the Pergamos era, causing many of GodŌĆÖs people to stray from sound doctrine and godly behavior. Some brethren allowed themselves to be overcome.

In the 21st century, the allure of wrong behavior is everywhereŌĆöbillboards, television, Internet social networks, movies. It never disappears. It never relents!

Yet we must fight this sinful enticement by resisting. As GodŌĆÖs people, we fight covetousnessŌĆöa fight that takes place in the mind. Without righteous priorities and goals, covetousness will overrun us and crush our attempts to flee its influence.

Ask: What takes your time? Who are your friends? Do you associate with groups that have goals that are incompatible with GodŌĆÖs kingdom? Have you been enticed to go back to the ŌĆ£pleasures of sinŌĆØ mentioned in Hebrews 11:25? Be honest with how you answer, and work to root out any problem areas.

As in ancient Pergamos, modern cities are replete with idolatry: jutting steeples from false churches, stadiums and auditoriums dedicated to false ŌĆ£godsŌĆØ of entertainment and sports, roads lined with tempting billboards that promote lust, covetousness and sinful behavior. False doctrines and religious confusion prevailŌĆöeven in supposed ŌĆ£churches of GodŌĆØ (the splinters).

In this permissive world, consider the lessons of the Pergamos era:

Some of that time did heed ChristŌĆÖs warning. Christians today must do the same, and qualify for the same reward mentioned in Revelation 2:17: ŌĆ£To him that overcomes will I give to eat of the hidden manna [spiritual food], and will give him a white stone, and in the stone a new name written, which no man knows saving he that receives it.ŌĆØ

Those who overcome and avoid the doctrines of Balaam and the NicolaitansŌĆöand hate every false wayŌĆöwill be named among those in the God Family and rule in His kingdom!

(Read Where Is the True Church? ŌĆō and Its Incredible History! to learn more about Church eras.) 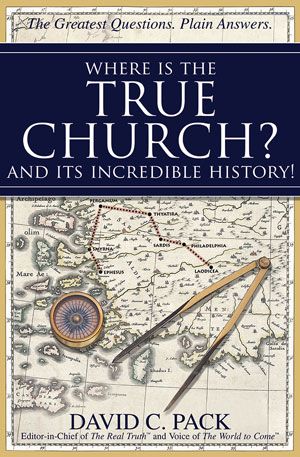