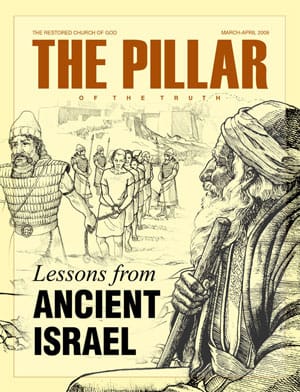 During the Passover service, breaking of unleavened bread is a time to reflect on the great sacrifice of our Creator. This symbol of JesusŌĆÖ broken body has a specific purpose, separate from that of the wine symbol. It is through the broken body of Jesus Christ that we can be healed of our physical sins.

The apostle Paul wrote, ŌĆ£All have sinned, and come short of the glory of GodŌĆØ (Rom. 3:23). Chapter 6, verse 23 states, ŌĆ£The wages of sin is death.ŌĆØ The wages of physical sin include sickness and disease. Violating physical laws can result in illness, even death.

How is one released from the penalty of physical sin?

While most traditional Christians never fully understand ChristŌĆÖs sacrifice is for our spiritual sinsŌĆöand what it meansŌĆöthey do generally know Christ died for us (Col. 1:13-16; Eph. 3:9). His shed blood paid the penalty for broken spiritual laws.

However, most are unaware that there is physical sinŌĆönever mind that it needs to be forgiven.

Matthew 9, Mark 2 and Luke 5 all contain parallel accounts of Christ healing ŌĆ£a man sick of the palsy, lying on a bedŌĆØ (Matt. 9:2). Continuing in Luke, this account states, ŌĆ£And when He saw their faith, He said unto him, Man, your sins are forgiven youŌĆØ (Luke 5:20).

Consider what these accounts are saying. Telling someone he is healed (ŌĆ£Rise up and walkŌĆØ) and forgiving his sin (ŌĆ£Your sins be forgiven youŌĆØ) are equivalent.

Chapters 52 and 53 of Isaiah record an astonishing prophecy describing ChristŌĆÖs suffering prior to His crucifixion on the stake. Examining the prophecy reveals the event at which Christ bore our infirmities and sicknesses. The description concludes with the following picture of the fulfillment of His role: ŌĆ£Surely He has borne our griefs, and carried our sorrows: yet we did esteem Him stricken, smitten of God, and afflicted. But He was wounded for our transgressions, He was bruised for our iniquities: the chastisement of our peace was upon Him; and with His stripes we are healedŌĆØ (53:4-5).

A New Testament passage summarizes the above account. I Peter 2:22-24 speaks of Christ, ŌĆ£Who did no sin, neither was guile found in His mouthŌĆ”who His own self bore our sinsŌĆ”by whose stripes you were healed.ŌĆØ

Pause for a moment. Reflect on what Jesus was willing to endure on behalf of those who need GodŌĆÖs marvelous healing powerŌĆösuch a horrific beating so that human beings could be restored back to perfect health, so we can ŌĆ£prosper and be in healthŌĆØ (III John 2)ŌĆöand enjoy the ŌĆ£abundantŌĆØ life (John 10:10).

I Corinthians 5:7 states, ŌĆ£Christ our passover is sacrificed for us.ŌĆØ

Each year, on the night of the Passover, Christians are commanded to assemble for a solemn memorial service, which looks back at ChristŌĆÖs suffering and crucifixion. The service is unlike any other occasion in the year.

Paul explains the symbols of the Passover service and summarizes all we have covered: ŌĆ£And when He had given thanks, He broke it, and said, Take, eat: This is My body, which is broken for you: This do in remembrance of Me.

ŌĆ£After the same manner also He took the cup, when He had supped, saying, This cup is the new testament in My blood: This do you, as often as you drink it, in remembrance of Me.

ŌĆ£But let a man examine himself, and so let him eat of that bread, and drink of that cup. For he that eats and drinks unworthily, eats and drinks damnation [judgment] to himself, not discerning the LordŌĆÖs body.

As we approach Passover, remember that God wants us to understand the forgiveness of all sinsŌĆöboth physical and spiritual.