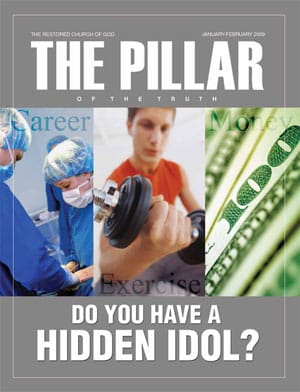 Why Christians Do Not Celebrate New Year’s

At this time of the year, true Christians are deluged with Christmas music, commercials and invitations to parties.

Shortly after Christmas is another holiday we do not celebrate; but we may not realize why. Have you ever been confronted about not attending a New YearŌĆÖs party and were unsure how to answer? The reasonsŌĆöproofsŌĆöare important to keep fresh in our minds.

True Christians carefully hold fast to the same truths, teachings and traditions that Jesus Christ taught His apostles to pass on to the New Testament Church (Matt. 28:18-20). We are to abstain from the ŌĆ£eat-drink-and-be-merry-for-tomorrow-we-dieŌĆØ attitude.

This is very different from the vast majority of professing ŌĆ£ChristiansŌĆØ who see nothing wrong with observing New YearŌĆÖs.

Wild New YearŌĆÖs celebrations have been taking place for millennia. In early times, the ancient Romans gave each other New YearŌĆÖs gifts of branches from sacred trees. In later years, they gave gold-covered nuts or coins imprinted with pictures of Janus, the false god of gates, doors and beginnings. January was named after Janus, who had two facesŌĆöone looking forward and the other backward.

The God we serve ŌĆ£is not the author of confusion, but of peaceŌĆØ (I Cor. 14:33). The original Greek word used here for confusion also means ŌĆ£instability, disorder, commotion, tumultŌĆØŌĆöwords that perfectly describe New YearŌĆÖs history.

Not only is its history chaotic, but so is the holiday itself. For some reason, people tend to let go of all inhibitionŌĆöand many times self-respectŌĆöand simply go wild on New YearŌĆÖs. They drink too much, ŌĆ£hooking upŌĆØ with people they barely know, for quick affairs that yield life-long repercussions.

Even more than the disorder, instability and confusion that is New YearŌĆÖs, God hates this holiday because of its pagan roots. Notice Jeremiah 10:2-3: ŌĆ£Learn not the way of the heathenŌĆ”for the customs of the people are vain.ŌĆØ This is a command. Throughout His Word, God describes ŌĆ£heathenŌĆØ as those who worship nature (the sun, moon, stars, trees, etc.), manmade idols or anything but the one true God. True Christians understand that God hates customs, practices and traditions that have pagan worship origins.

How serious is God about paganism? When He rescued the twelve tribes of Israel from Egypt and led them out of brutal slavery, He commanded them, ŌĆ£After the doings of the land of Egypt, wherein you dwelt, shall you not do: and after the doings of the land of Canaan, where I bring you, shall you not do: neither shall you walk in their ordinancesŌĆØ (Lev. 18:3). God demanded the Israelites to not defile themselves with the practices and customs of the surrounding pagan nations (vs. 24-29). ŌĆ£Therefore shall you keep My ordinance, that you commit not any one of these abominable customs, which were committed before you, and that you defile not yourselves therein: I am the Lord your GodŌĆØ (vs. 30).

It should be our lifeŌĆÖs mission to live by GodŌĆÖs Word aloneŌĆönot by the traditions of men, including pagan New YearŌĆÖs celebrations!

When God instituted the Passover to Israel, He also revealed His sacred calendar (Ex. 12:2). Christians understand what days we are commanded to observe: Passover, Days of Unleavened Bread, Feast of Pentecost, Feast of Trumpets, Day of Atonement, Feast of Tabernacles, and Last Great Day, all clearly projected in GodŌĆÖs sacred calendar. Christ kept them, and so did the apostles (Matt. 26:17-19, 26-28; 28:18-20; I Cor. 5:6-8).

Both New YearŌĆÖs Eve and New YearŌĆÖs Day originate from a pagan, Satan-influenced world. They were designed to deceive mankind by appealing to fleshly, carnal desiresŌĆöor, as the Bible calls them, the works of the flesh: ŌĆ£Now the works of the flesh are manifest, which are these: adultery, fornication, uncleanness, lasciviousness, idolatry, witchcraft, hatred, variance, emulations, wrath, strife, seditions, heresies, envyings, murders, drunkenness, revelings, and such likeŌĆØ (Gal. 5:19-21). These describe well all that transpires during New YearŌĆÖs celebrations.

At the end of verse 21, we read the ŌĆ£rewardŌĆØ of those who practice fleshy, carnal desires. Notice: ŌĆ£They which do such things shall not inherit the kingdom of God.ŌĆØ