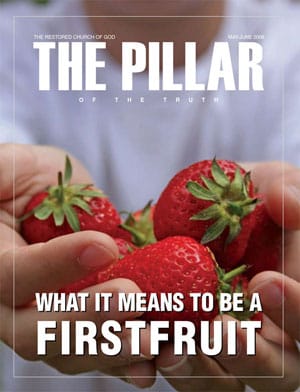 What It Means to Be a Firstfruit

As with the Church of God, many organizations of mainstream “Christianity” recognize the Day of Pentecost. Like us, they understand it was on this pivotal day that the New Testament Church began and Jesus Christ’s disciples received the Holy Spirit.

However, this is where the similarities of understanding end.

Most in the world wrongly assume that when the Church started on Pentecost, it was the beginning of God trying to save every human being. Therefore, they conclude, “the church” must work to “bring everyone to salvation” before Christ returns, since the “unbelieving” are consigned to an ever-burning hell unless they accept Jesus as their personal Savior before they die.

Sadly, the god of this world (II Cor. 4:4)—Satan the devil—has deceived man and kept him from knowing the true meaning of the Feast of Firstfruits.

The Church of God observes the annual Holy Days as clearly outlined in the Bible. These days reveal God’s Plan of Salvation for mankind. As true Christians, we stand apart in properly understanding these annual Sabbaths and festivals.

The truth of Pentecost is contrary to what a deceived humanity has believed for thousands of years. This day shows us that we are the “firstfruits” of salvation through Christ. God is not working with the entirety of mankind—He is only working with those few called now. Jesus said, “No man can come to Me, except the Father…draw him” (John 6:44). God is now only calling—drawing out from the world—relatively few into His “little flock” (Luke 12:32).

Because of Adam and Eve’s decision to eat of the wrong tree in the Garden of Eden—in effect, turning their backs on God and choosing to cut themselves off from Him as their Ruler and Revealer of knowledge—mankind has been cut off from God. “And the Lord God said, Behold, the man is become as one of us, to know good and evil: and now, lest he put forth his hand, and take also of the tree of life, and eat, and live forever: Therefore the Lord God sent him forth from the Garden of Eden, to till the ground from where he was taken. So He drove out the man; and He placed at the east of the Garden of Eden Cherubims, and a flaming sword which turned every way, to keep the way of the tree of life” (Gen. 3:22-24).

Adam and Eve chose for themselves how to live, without reliance upon or instruction from their Maker. As a result, for the past 6,000 years, man has been cut off from contact with God.

At this time, only firstfruits—those whom God is calling out of the world’s ways, customs and beliefs—have access to God.

The apostle James wrote, “Of His own will begat He us with the word of truth, that we should be a kind of firstfruits of His creatures” (Jms. 1:18). These firstfruits are now qualifying to rule with Christ when He returns to establish the kingdom of God on the earth.

Every human being who has ever lived will be given an opportunity to qualify for salvation. Yet only a select few are called now, during the 6,000 years of the devil’s rule over the governments and societies of men. Compared to those who will receive the understanding of God’s truth during the Millennium and the 100-year White Throne Judgment, those called in this age have a greater struggle. They must daily wage spiritual warfare against the pulls and pressures of the self, society and Satan.

But does this mean God discriminates against His firstfruits, since the tests and trials they must endure are more difficult than what the rest of mankind will face in qualifying for salvation? Of course not! Consider that we will have a greater reward than those called after Christ’s Return. Notice: “And he that overcomes, and keeps My works unto the end, to him will I give power over the nations” (Rev. 2:26-27); and “To him who overcomes will I grant to sit with Me in My throne” (3:21). These promises pertain only to us—not to those called later.

Being a firstfruit requires that we overcome Satan, the pulls and temptations of the world, and our human nature. This requires tremendous effort and self-denial. Most are not willing to pay the price. They would much rather “go with the flow” than swim against society’s current.

However, denying our calling and ignoring what God has laid before us brings consequences—both for the present and our future. It means missing out on the joys of exercising and growing in God’s Holy Spirit in this lifetime. It also means missing out on receiving authority and power in God’s kingdom.

We have been given the opportunity to receive training for the highest positions in Jesus Christ’s future world-ruling government. The Bible reveals that the original 12 apostles will rule over the 12 tribes of Israel. David will be over all of Israel, and Abraham, Isaac and Jacob will likely be even higher in authority. Other Old and New Testament saints will rule in positions of great authority alongside Christ, as will we—if we stay the course and do not forsake our calling.

Of course, this does not preclude those called during the Millennium and beyond from having positions of authority in Christ’s government, because of “the increase of His government and peace there shall be no end” (Isa. 9:7). God’s government will continue to grow and expand indefinitely.

Nonetheless, it is the firstfruits who will receive the highest offices and rewards, since they will have had to overcome the most. Those called after Christ’s Return will not have to overcome Satan (who will be imprisoned) or his world (which will be replaced by the world to come). They will only have to conquer the flesh, but with plenty of help from the firstfruits, who will by then have been born into the God Family.

Imagine living and struggling in this world, cut off from God. Imagine not knowing there is a Master Plan—a supreme purpose for all creation—and that there is a reason you were born. Now compare this to receiving the knowledge and understanding of the Plan of God, and being able to contact the Father daily through Bible study, prayer and meditation—to strengthen you by His Word and Holy Spirit. No amount of rubies, diamonds, emeralds, gold or currency can compare to the wonderful and awesome opportunity to be a firstfruit in God’s Plan for humanity!

As firstfruits, we are not called into His Church now just for spiritual salvation and the gift of eternal life. We are not called in this lifetime “just to be saved.” Every one of us was placed into God’s Church for two specific purposes.

First, as the continuation of the Philadelphian era, we are called to loyally support the Great Commission of proclaiming “the gospel of the kingdom…in all the world for a witness unto all nations” (Matt. 24:14)—through personal and constant sacrifice in time, prayers, tithes and offerings, and by supporting Christ’s apostle, Headquarters and ministry.

Second, we are to overcome sin, conquer the self, and develop holy, righteous and perfect character, so that when Jesus returns, His wife—the Church—will have made herself ready, without spot, blemish or wrinkle.

Our job as firstfruits is far from finished! We must continually strive to attain this stature (Eph. 4:13). Our work is not finished until we are ready to leave our flesh and blood “tent” and become Spirit beings in the God Family!

Christ promised that after His ascension to heaven, He would send to His disciples a “Comforter” and a helper—the Holy Spirit (John 16:5-7). On the day of Pentecost, the Church of God was born, and God began to work with those He had predestinated to be called.

Since then, God has been selecting His “firstfruits” from among this world, preparing them to rule in His kingdom. When the “present evil world” (Gal. 1:4) is replaced by the “world to come” (Mark 10:30) in the Millennium, all human beings will have an opportunity to know God’s Plan of Salvation and receive eternal life. Ultimately, this will prepare the way for when all who have ever lived will be resurrected and given a chance to choose God’s Way. (These future events are represented by the four fall Holy Days.)

Again, James called us the “firstfruits of [God’s] creatures.” Likewise, the apostle Paul wrote that “the whole creation groans and labors with birth pangs until now...but ourselves also, which have the firstfruits of the Spirit…eagerly waiting for the adoption [sonship]” (Rom. 8:22-23 – NKJV). God’s Creation—the vast universe—longs for the day when Christ, the very first of the firstfruits, will return and resurrect His younger siblings to rule under Him in His government.

Time is already short—and growing shorter each day! During the Day of Pentecost, let’s keep in mind what we as “firstfruits” have been called to do. We must support the Great Commission. We must prepare ourselves to be the bride of Christ, the spiritual temple to which our Savior and King will return. We must fulfill our individual calling of being firstfruits—the first of untold billions to be born into the kingdom of God!