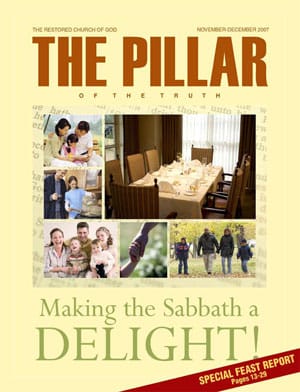 Whose Servant Are You?

Every person serves one of two masters. Which do you serve?

The descendants of the patriarch Israel had come into dire circumstances. As the years of their sojourning in Egypt passed, what was once a place of refuge from famine had become a place of bondage. Despite having grown in number, they were slaves, forced to serve their Egyptian taskmasters with rigor. They were a subjugated people whose daily lives, not truly their own, were filled with hard, bitter service (Ex. 1:9-14).

Year after year, the Israelites’ suffering in servitude continued—an enslaved people forced to perform the will of the Egyptians, build their cities and honor their gods. With each passing generation, this life of slavery in a land of many gods was fast becoming the norm for the children of Israel.

Yet God heard their cries and determined to deliver them out of bondage (Ex. 3:7-8). His purpose was to give them relief from harsh taskmasters and endless labors—and to provide rest in the Promised Land. No longer would the Israelites be slaves of the Egyptians, toiling endlessly; now they were to serve the God of Abraham. He was to be their Master, who would bless them with every good thing. Israel was to serve the true God with all its heart.

But though they physically left Egypt and that form of servitude, that generation of Israelites never fully came out. Many, in their thinking and actions, remained slaves. When given the choice to either serve God in a land of rest or the Egyptians in a land of hard bondage, many wanted to return to Egypt (Ex. 14:12; 16:3; Num. 14:3-4).

However, they could not serve both—it had to be one or the other (Matt. 6:24). They were to serve a new Master.

That generation never made it into the Promised Land.

Called Out of Slavery

The entire world, except for a tiny handful of people called out of it, are enslaved—firmly caught in Satan’s grasp. He is the originator of sin (John 8:44), and those serving him perform the works of the flesh (Gal. 5:19-20).

At some point early in our lives, we became servants of Satan, having been caught in “the snare of the devil…taken captive by him [to do] his will” (II Tim. 2:26). Prior to God’s calling, we spent “the time past of our life…[walking] in lasciviousness, lusts, excess of wine, revellings, banquetings, and abominable idolatries” (I Pet. 4:3).

More than anything else, Satan wants you to accept him as your master (Matt. 4:9).

But do you understand that, when God called you, He called you out of slavery? That He offered you a way out—a way of escape from servitude in spiritual Egypt, serving—in bondage to—Satan, the god of this world? That He has offered you rest from the way of a transgressor (Prov. 13:15) and “from dead works to serve the living God” (Heb. 9:14)?

Either way, you are someone’s slave. There is no middle ground. You cannot have two masters—you must choose. Christ’s words make this perfectly clear: “No man can serve two masters: for either he will hate the one, and love the other; or else he will hold to the one, and despise the other” (Matt. 6:24).

Like the generation that came out of physical Egypt, do you sometimes find yourself wanting to go back to spiritual Egypt, somehow thinking that bondage was better—easier (Num. 11:5)? Do you sometimes have the mindset of a runaway slave?

In Romans 1:1, Paul calls himself a servant of Jesus Christ. The Greek word translated as servant is doulos. It means “a slave, whether literally or figuratively, involuntarily or voluntarily; frequently therefore in a qualified sense of subjection or subserviency, a bondman or servant.”

Paul fully understood his life was no longer his own (I Cor. 6:19), that it belonged to Christ. This is why he told the Corinthian congregation, which had almost every problem imaginable, that they were “bought with a price” and instructed that they “be not…the servants of men” (I Cor. 7:23).

When we accepted Jesus’ sacrifice as payment for the death penalty for our past sins, we were bought and paid for. The price paid to buy us was high—it took the death of Jesus Christ to purchase us from Satan. Jesus took us from captivity to Satan to captivity to Himself (Eph. 4:8). He is now our Master. For our part, we are to “bring into captivity every thought to the obedience of Christ” (II Cor. 10:5).

Surrendering yourself to Christ will not be easy. Satan will try to catch you unaware and steal you back. He walks about “as a roaring lion…seeking whom he may devour.” We are warned to “be sober, be vigilant; because [of our] adversary the devil” (I Pet. 5:8).

If you are not careful, you can fall into one of the devil’s snares—taken captive—and unwittingly find yourself once again doing Satan’s will. Make no mistake, “for of whom a man is overcome, of the same is he brought in bondage” (II Pet. 2:19).

You can clearly know whose servant you are—who your Master is—on a day-by-day basis. Here is the formula: “Know you not, that to whom you yield [give yourself over to] yourselves servants to obey, his servants [slaves] you are to whom you obey; whether of sin [Satan] unto death, or of obedience [Christ] unto righteousness?” (Rom. 6:16). It simply boils down to whose will you perform!

And if He is your Master, His command is to “yield your members servants to righteousness unto holiness” (Rom. 6:19).