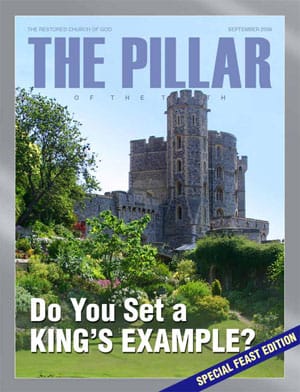 Is the Last Great Day separate from the Feast of Tabernacles?

The Feast of Tabernacles is a time when God’s people focus on the Millennium. However, this 1,000-year period is only the beginning.

The seventh Holy Day, the Last Great Day, involves a number of events that begin at the conclusion of the Millennium: the Second Resurrection; the White Throne Judgment; the Third Resurrection; and, finally, the time of the New Heavens and New Earth.

Many blur the great meaning of what this Holy Day pictures with the Feast of Tabernacles. Nevertheless, these Festivals depict entirely different phases of God’s Master Plan.

Other Scriptures from the Old Testament

We also find the command to observe this “eighth day” in Numbers 29:35: “On the eighth day you shall have a solemn assembly: you shall do no servile work therein.” Later, in the time of Solomon, we read of this day being observed: “Also at the same time Solomon kept the feast seven days, and all Israel with him, a very great congregation, from the entering in of Hamath unto the river of Egypt. And in the eighth day they made a solemn assembly: for they kept the dedication of the altar seven days, and the feast seven days. And on the three and twentieth day of the seventh month he sent the people away into their tents, glad and merry in heart for the goodness that the Lord had shown unto David, and to Solomon, and to Israel His people” (II Chron. 7:8-10).

Since the Feast of Tabernacles had lasted seven days (preceded by a seven-day dedication of the altar, as Solomon had completed the Temple), it continued from the 15th day of the 7th month through the 21st day. The eighth day, or Last Great Day, fell on the 22nd day of the 7th month, and it was on the 23rd day that Solomon sent the people away.

Now we examine whether that eighth day was still observed during the time of Ezra: “Also day by day, from the first day unto the last day, he read in the book of the Law of God. And they kept the feast seven days; and on the eighth day was a solemn assembly, according unto the manner” (Neh. 8:18). That eighth day was the Last Great Day, which concluded the fall Holy Day season.

The Church has long understood that John 7:37 is a reference to the Last Great Day, not the seventh day of the Feast. Let’s read: “In the last day, that great day of the feast, Jesus stood and cried, saying, If any man thirst, let him come unto Me, and drink.”

The following verses explain the meaning of the Last Great Day: “He that believes on Me, as the scripture has said, out of his belly shall flow rivers of living water. (But this spoke He of the Spirit, which they that believe on Him should receive)” (vs. 38-39).

Mr. Armstrong always stressed that John 7:37 referred to the Last Great Day. The Church properly understood that the day referenced was a Sabbath—a “great” day. However, in this age, everything the Church once understood is up for debate and questioning. One group has sought the opinions of worldly scholars, and now concludes that the day referred to in verse 37 is “questionable.”

Yet the meaning is clear. Verses 37 through 39 depict the giving of the Holy Spirit to “any” who would thirst. This opportunity will be given to all after the second resurrection. This is the same outpouring of God’s Spirit described in Ezekiel 37:13-14: “And you shall know that I am the Lord, when I have opened your graves, O My people, and brought you up out of your graves, and shall put My Spirit in you, and you shall live, and I shall place you in your own land: then shall you know that I the Lord have spoken it, and performed it, says the Lord.” Ezekiel 37 addresses the resurrection of all the generations of the house of Israel—a type of all humanity.

Christ’s sermon was clearly given on the Last Great Day—the eighth day—referencing a wonderful time to come—a time when all humanity would be given the opportunity for salvation. God’s people keep this day every year to look forward to this joyful event.

What the Last Great Day Pictures

Let’s examine the major events that are to occur beyond the Millennium.

First, Satan is released for a “little season” (Rev. 20:3, 7), perhaps for only a few years. Since God has allowed the devil a specified time of ruling over humanity, when that time is cut short (Matt. 24:22; Rom. 9:28), it is redeemed, or paid back, at the end of the Millennium.

Once loose, Satan and his demons proceed to again influence mankind (Rev. 20:8-9). Millions will be deceived, despite having been taught the truth and being forewarned of Satan’s arrival. This rebellion will result in millions forfeiting their opportunity for eternal life.

(Since no separate resurrection is mentioned in regard to the many billions who will have lived in the Millennium, it is apparent that they are to be changed into spirit beings at the end of their individual lives.)

Next is the White Throne Judgment, involving the Second Resurrection. The billions brought back from the dead are to be judged primarily according to what they do after being resurrected to a physical life (Ezek. 37:1-14). It is a time of judgment—not a time of sentencing, as many have been misled to believe. The books they are judged by (Rev. 20:12) are the books of the Bible. The Greek term biblia used there is the same word translated “bible.” The Hebrew term used in Daniel 7:10, describing this same event, also corresponds to this Greek word for “bible.”

Isaiah 65:20-24 clearly shows that these are physical human beings who will live during this 100-year judgment period (whether they begin as infants and grow to maturity, or as elderly people whose health and vitality are restored). All who had never been called to salvation before the Return of Christ will be given their first and only chance. They will live in a millennial-like setting and experience for the first time the peace, tranquility, abundance, joy, health and happiness that flow from living God’s Way.

The next event to occur after the White Throne Judgment is the Third Resurrection (Rev. 20:13-15)—an eternal punishment for those who rejected the salvation that God offered.

God created mankind to be molded and developed into Sons of God in the God Family. Man was necessarily given free moral agency in order to choose according to his own volition. It is inevitable that some will totally reject this way, choosing to live in rebellion against God. Such people would be miserable if they were to live throughout eternity under God’s rule. In His mercy, God allows them to perish in the lake of fire—it will be as if they never existed. Contrary to what false religions of this world teach, those who perish in these flames will not suffer throughout eternity. Rather, they will be quickly consumed in the lake of fire.

Those who have been “accursed” are awaiting this fate, as described in Isaiah 65:20 and the last part of Daniel 12:2. Those who are consumed in this fire die the second death (Rev. 20:14), from which there is no resurrection. This is also referred to as the resurrection of damnation (John 5:29).

Instead of being tortured forever, these are burned up and totally consumed, leaving “neither root nor branch,” as they “shall be ashes under the soles of your feet” (Mal. 4:1-3).

As the wicked are consumed, this fire continues to purge and purify the earth (II Peter 3:7, 10-12). This is the baptism by fire described in Matthew 3:11.

Once it is purged, the New Earth will no longer need oceans and seas to sustain physical life. Only spirit beings will inhabit the planet at that time.

Then, the Throne of God will descend from the third heaven to the New Earth, where God the Father will also dwell (Rev. 21:2-3).

The New Jerusalem will also descend from heaven. The size and shape of the Holy City is 12,000 furlongs—1,500 miles (Rev. 21:12-17). Verse 16 shows that the length, breadth and height are all equal, thus in the shape of a cube or some other geometric shape with equal dimensions.

With the passing of all these events, a new chapter will begin for the Family of God, lasting for eternity!