New: Real Truth World News Desk ŌĆō From Dhaka to Rio: How Do You Socially Distance in a Crowd? New: View all 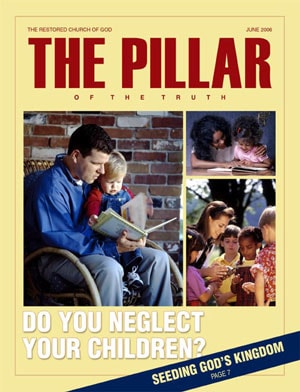 Is the Bible in harmony with science?

The Bible reflects many scientific facts—recorded for millennia for all to see—long before man could discover and understand them. Yet most people believe that God’s Word conflicts with science.

This is largely because, in the past, false religion has obstructed science whenever it did not appear to harmonize with the Bible. For example, for many centuries, the medieval Catholic Church embraced the false notion that the earth is flat and that the universe revolves around it. These ideas were borrowed from pagan sources.

Catholic clerics and theologians were so unyielding that when the astronomer Galileo made a series of discoveries confirming the theories of Copernicus, he was put on trial in 1632. Galileo and Copernicus had confirmed the earth’s orbital position in relation to the sun and other planets. They had clearly disproved the false idea of a flat, stationary earth being located at the center of the universe.

Nonetheless, Catholic leaders would not accept this new knowledge because it contradicted their theological “truths”; admitting error was out of the question. Instead, they forced Galileo to publicly renounce his discoveries (Encyclopedia Britannica, 11th ed., vol. 11, pp. 406-411).

It is now understood that Copernicus and Galileo were correct about the earth not being flat—and this is in complete harmony with the Bible. About 2,300 years earlier, the prophet Isaiah was inspired to write, “It is He that sits upon the circle of the earth, and the inhabitants thereof are as grasshoppers; that stretches out the heavens as a curtain, and spreads them out as a tent to dwell in” (40:22). This verse is expressed more explicitly in the Moffatt translation: “He that sits over the round earth…”

What is the TANAKH?

Some have observed that many Hebrew Bibles bear the label TANAK (or often TANAKH) and have asked what this means. This name is actually derived from the three major divisions of the Hebrew Scriptures:

(1) TORAH is the name given to the division of the Law of God—the first five books of the Bible.

(2) NEBEE-EEM is the name for the Prophets division.

(3) KETHUVEEN is the Writings division.

The initial letters of the three titles (T, N and K) form the word TANAK.

While the rest of mankind was oblivious to the nature of the earth’s orbit, ancient Israel understood this by what God had inspired in Scripture. Nearly 3,000 years before Copernicus, Moses had instructed Israel, “And you shall observe the feast of weeks, of the firstfruits of wheat harvest, and the feast of ingathering at the year’s end” (Ex. 34:22). The TANAKH (see inset), translated directly from Hebrew, expresses this last phrase as “at the turn of the year.” The word “turn” comes from tquwphah, which can mean “a revolution with respect to the sun [moving in a circle], course of time, moving in a circuit [as a planet moves in an orbit].”

In II Chronicles 24:23 (KJV), the phrase “end of the year” is better translated as the “revolution of the year.” Here again, the TANAKH calls it “the turn of the year.” The terms “turn” and “revolution” strongly suggest Israel’s familiarity with the orbital movements of our solar system. To confirm the sacred calendar, Levitical priests were required to observe the astronomical movements of our solar system. They understood the principles cited in Genesis 1: “And God said, Let there be lights in the firmament of the heaven to divide the day from the night; and let them be for signs, and for seasons, and for days, and years” (vs. 14).

Now notice Job 38:12-14: “Have you commanded the morning since your days; and caused the dayspring to know his place; that it might take hold of the ends of the earth…It is turned as clay to the seal; and they stand as a garment.” In other words, God is demanding of Job whether he could cause the sun to rise in the morning.

The phrase “it is turned as clay to [under] the seal” refers to the rotating cylinder used by potters in ancient times. The seal left its impression in the soft clay during the final turn after having been shaped by the potter. This analogy appropriately expresses the rotating motion of the earth, causing the sun to appear to rise and set, as the cycles of day and night alternate with precision.

Notice what God stated in Job 26:7: “He stretches out the north over the empty place, and hangs the earth upon nothing.” Instead of a flat earth resting upon the back of a giant tortoise (just one of many false beliefs of pagan civilizations), our planet is a rotating sphere that orbits the sun approximately every 365 days. The earth is suspended in space by powerful centrifugal forces that are in perfect balance with the gravitational pull of the sun.

Not only has God “hung the earth upon nothing,” He has placed the celestial bodies of the universe—galaxies with their stars, planets, moons, etc.—all suspended in empty space while moving at tremendous speeds.

Interestingly, the earth’s axis is aligned with Polaris, the North Star, around which is a void of other stars within our galaxy. This void could well be the “empty space” of Job 26:7—possibly the result of Satan’s failed attempt to seize God’s throne, as recorded in Isaiah 14: “For you [Lucifer] have said in your heart, I will ascend into heaven, I will exalt my throne above the stars [angels] of God: I will sit also upon the mount of the congregation, in the sides of the north” (vs. 13).

“Four corners of the earth”

Some have pointed to the expression “the four corners of the earth” (Isa. 11:12) and assumed that the ancient Hebrews believed the world was square or flat. Here, “corners” is translated from the Hebrew word kanaph, which meant that, at the outset of the millennium, God would gather the outcasts of Israel and the dispersed of Judah from the four extremities of the earth. This same Hebrew word is also translated in Isaiah 24:16 as the “uttermost part” of the earth. (Obviously, Isaiah would not contradict his own recording of the earth’s spherical shape – 40:22.)

The expression “the four corners of the earth,” as used in Revelation 7:1, represents the four major directions of wind—north, south, east and west. Even here, the Greek word translated “corner” more accurately means the “quarters” from where the winds originate.

Other Scriptural References to Science

Jeremiah 10:13 describes the earth’s hydrological cycle, involving the evaporation, condensation and distillation of water in clouds, resulting in rain.

King David wrote about the “paths of the seas” in Psalm 8:8. This verse inspired the pioneering work of Matthew Fontaine Maury in the mid-1800s to resolve this mystery, not yet thoroughly understood in modern times. Maury was most fascinated by the Gulf Stream that delivers warmth to both sides of the northern Atlantic Ocean. We now understand that this giant path, or “river,” through the ocean carries the equivalent of nearly 9,000 Mississippi rivers!—and predates modern man’s understanding of prevailing ocean currents, which were only efficiently charted in the 1800s.

Space does not permit the discussion of migratory birds and fish understood by ancient servants of God, or the fact that lightning travels upward toward the clouds rather than downward toward the ground (introduced in Job 28:26). Only in the 1960s did we begin to understand what was meant by the “springs of the sea” (38:16)—underground fountains of fresh water that empty more water into the ocean than surface rivers, in many locations. Yet many such recent discoveries of mysterious wonders of the creation were recorded in the Scriptures over three and a half millennia ago.

The Bible is approximately one-third history, one-third prophecy and one-third direct spiritual instruction. There are many scientific facts of God’s creation scattered throughout His Word that have only recently been “discovered” and understood by modern science.