Though the electronic version of The Bible’s Greatest Prophecies Unlocked! is free, we do not at this time mail this 574 page book. Those who wish to read the print edition of the book may wish to order it from Amazon.com. 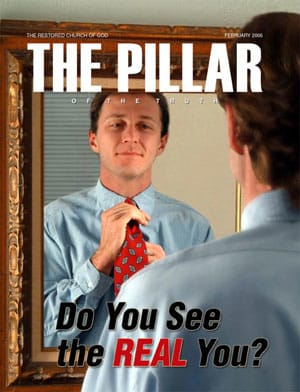 Where Is God’s Church Today?

Jesus said, “I will build My Church…” There is a single organization that teaches the entire truth of the Bible, and is called to live by “every word of God.” Do you know how to find it? Christ said it would:

The Bible Is Your Foundation

There seems to be an endless supply of books about leadership. Every bookstore and library has a sizeable section on the topic. Unfortunately, these books are written by “successful” businessmen of this world trying to market their formulas for leadership. Their books are filled with man’s knowledge of how to lead. It is nearly impossible to find a book that is based on God’s knowledge.

In a world cut off from God, man does not want to be told what to do; he will not go to the foundation of true knowledge to learn how to be a leader. Instead, mankind has tried to discredit the Bible at every possible turn. For example, “scholars” have claimed that Noah was only saving his family from a local flood; that Moses took the Israelites through the Reed Sea and not the Red Sea; that David was only a tribal warrior despot—the list goes on.

Unfortunately, Hollywood and society have helped to paint a horrible picture that has become ingrained in our minds. They portray the men of the Bible as fanatics, with semi-long hair and a generally unkempt appearance.

But these men of God were not fanatics. Their lives serve as examples to us (I Cor. 10:6). The details of the Bible, which can often be quickly overlooked, reveal their leadership ability and the principles by which they lived.

“Father of the Faithful”

Let’s begin with Abraham. He took 318 trained servants who were born in his household and chased three great kings over 150 miles, destroying their armies in order to save his nephew Lot from captivity (Gen. 14:1-15). Abraham recognized that his success was not of his own doing, but was God’s. He showed this by giving Melchizedek a tenth of the spoils of war (vs. 20). Abraham was not a religious fanatic who simply wandered around the Middle East. He was a man who feared and obeyed God.

For a moment, let’s take a look between the lines in order to paint a complete picture of Abraham and these 318 men he took into battle. First, Abraham would have proven through his daily actions that he was a man of character. He would have shown these men that they could trust him and that he was looking out for their best interests. These servants came from a great many families; Abraham would have needed the economic means to provide for them.

Let’s look at this in terms of today’s dollars, with 159 families (one-half of 318) consisting of two parents, two sons and two daughters. Abraham would have had to foot the bill of over $36 million. Also consider that this was only for his trained servants!

All of this serves as evidence of Abraham’s leadership capabilities.

Let’s look at other examples of men in the Bible who demonstrated extraordinary leadership.

As second-in-command under the Pharaoh of Egypt (Gen. 41:40-42), Joseph was a man of God, trained to be a leader. Through the lessons he learned from being sold into slavery by his brothers, working in Potiphar’s house, resisting the temptations of Potiphar’s wife, and working in prison, Joseph was being prepared to become a ruler in Egypt. At that time, Egypt was the greatest nation on earth. Can you imagine an ex-convict being appointed Vice President of the United States?

In the beginning of the book, we learn that Job was blameless and upright, feared God, shunned evil, and had many possessions. But Job was not perfect, for he had to overcome self-righteousness. After he had done this, God doubled his possessions. These are described in Job 42: “So the LORD blessed the latter end of Job more than his beginning: for he had fourteen thousand sheep, and six thousand camels, and a thousand yoke of oxen, and a thousand she asses” (vs. 12).

God would not have given these possessions to Job if he had previously been a poor steward. God does not give us anything without expecting us to use it and to grow it (Matt. 25:14-30). Looking after all these animals properly would be impossible for one man to do. Job needed an army of men to help him. These men would have needed leadership, direction and management—qualities that Job had to have possessed in order for God to give him these blessings.

Joshua was a man of great vision. He knew God would back him up as he stood with Caleb against the ten scouts who warned Israel not to enter the Promised Land. Joshua and Caleb pleaded with the Israelites to change their minds and to go and take the land. Facing a hostile crowd of two-to-six million people, and trying to convince them to change their minds, would have taken courage, vision and determination. Later, Joshua took Moses’ place in leading Israel into the Promised Land.

Taking and settling the Promised Land would require serious commitment and leadership. God would not choose just anyone to head this task. He chose Joshua because he had worked closely with Moses for many years, learning to follow God’s instructions. Imagine having to settle millions of people into the Promised Land—imagine the logistical and organizational problems that would need to be solved. Compare this to the settling of North America, which took place over a period of centuries and required a lot of hard work. Yet, Joshua had up to six million Israelites to settle immediately. No small task!

As a prophet, Daniel recorded some of the most important prophecies of the Bible. He also was a great leader. After explaining a dream to Nebuchadnezzar (Dan. 2), Daniel was made ruler over the entire province of Babylon. Again, his track record would have shown his aptitude for this position.

From prophecy, we know that Babylon was the greatest Gentile empire of its day. At its zenith, Daniel was made ruler of the premier province of the empire. This could be compared to Daniel being given the governorship of California. Daniel had to have been a very unusual leader.

These examples have shown us that these men were leaders. However, when you read the accounts of their lives, you cannot find specifics on how these men led. Nowhere will you find a scripture that says, “Joseph led this way…” or “Job’s leadership style was…” God is a highly organized Being and did not waste one word in the Bible. Using the principle of “precept…upon precept, precept upon precept; line upon line, line upon line; here a little, and there a little” (Isa. 28:10), we can discover the traits that made these men successful leaders, and how we can become the same.

What you will find in the Bible is that these men obeyed and feared God and were filled with the Holy Spirit (Gen. 41:38; Job 1:1). This is the key to finding out how these men led.

To obey and fear God is to keep His commandments (Deut. 6:2). Keeping God’s laws brings blessings, and the faithful obedience of these men of God made them extraordinary leaders.

Many of the commandments and statutes are principles that help you become a better leader. Take, for example, the commandment “You shall not bear false witness” (Ex. 20:16). In the business realm, it is much easier for employees to follow a boss’s lead if they know he will never lie and that he will always pay his workers the wages they have rightfully earned.

Our purpose is to become leaders in the world tomorrow, ruling with Christ and rebuilding this world the right way. What source, other than the Bible, contains laws and principles that show us how to become effective leaders?

True leaders are defined by their CHARACTER. The Holy Spirit gives men the power to build God’s character. God is the greatest and most powerful Being in the entire universe. He is also the GREATEST LEADER.

The fruits of the Holy Spirit are listed in Galatians 5:22-23: “But the fruit of the Spirit is love, joy, peace, longsuffering, gentleness, goodness, faith, meekness, temperance: against such there is no law.”

Leadership that evidences love (outgoing concern) will yield trust and respect. If you have joy, people will follow just because they want to take part in that joy. Peace will relax people and set them at ease. Longsuffering will encourage change. Gentleness will encourage growth. Goodness will encourage loyalty. Faith will increase confidence. By showing meekness, those under you will know that you do not see yourself as better than they. If you display temperance, they will know that you are in control at all times.

All of this is just a brief summary of God’s character. The Bible reveals much, much more.

The men of God from the Old Testament were dynamic leaders of their time, and God blessed them in many ways. But they also developed holy, righteous character—God’s character—by keeping the laws of God, which made them successful leaders.

The Bible is the first place we should look to in order to learn how to become leaders today, preparing for the world tomorrow.