This website requires the use of Javascript to function correctly. Performance and usage will suffer if it remains disabled.
How to Enable Javascript
Break Them Up? 5 Ways Congress Is Trying to Rein in Big Tech

Break Them Up? 5 Ways Congress Is Trying to Rein in Big Tech 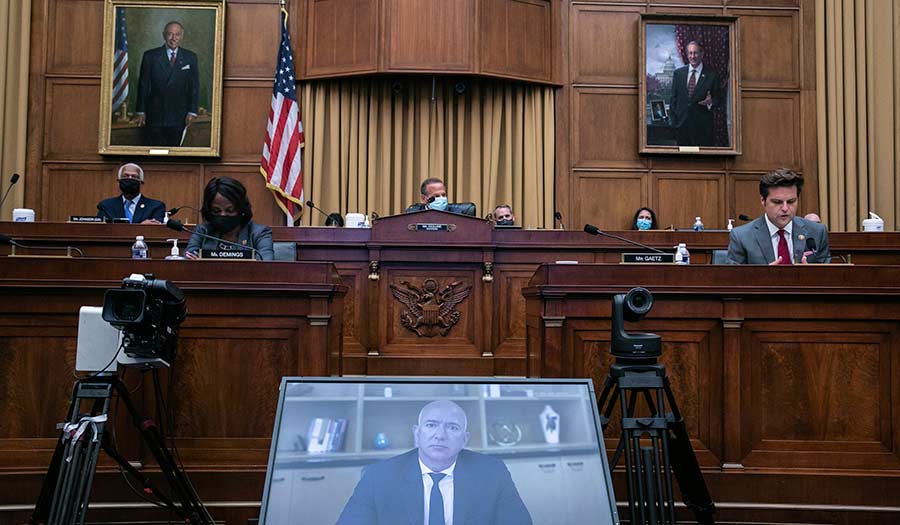 WASHINGTON (AP) – Groundbreaking legislation is advancing in Congress that would curb the market power of tech giants Facebook, Google, Amazon and Apple and could force them to untie their dominant platforms from their other lines of business. Hostility toward Big Tech has grown in recent years with the belief that their size and influence have stifled competition, limited consumer choice and raised prices.

The bipartisan legislation targets the companies’ structure and points toward breaking them up, a dramatic step for Congress to take against a powerful industry whose products are woven into everyday life. Its backers say it would help ensure lower prices and more choices for consumers, and a fairer playing field for smaller businesses to compete.

In two days of heavy debate, the House Judiciary Committee approved the legislative package and sent it to the full U.S. House, where a vote will be the next step in what promises to be a strenuous slog through Congress.

The measures seek to rein in the tech giants in five ways.

The legislation would bar the four companies from owning a dominant platform at the same time they own another line of business if having both creates a conflict of interest.

That means they could be forced to sell off businesses in which their market dominance enables them to favor their own services or squash competitors. Because the tech giants often operate both as a platform and as a competitor on the platform, industry critics say, there is a built-in conflict.

This is “the big enchilada” of the legislative package, is how a Republican lawmaker put it. A Democrat, Representative Zoe Lofgren, whose California district sits in Silicon Valley, opposed the bill. “It would take a grenade and just roll it into the tech economy and blow it up,” she said.

The measure does not name the four companies. But they fit into a new legal category it creates called “covered platforms” that fall under the new restrictions: online platforms with 50 million or more monthly active users, annual sales or market value of over $600 billion, and a role as a “critical trading partner.”

Some critics of the industry have pointed to Facebook’s popular messaging services Instagram and WhatsApp as strong candidates to be divested.

Lawmakers propose enabling users on dominant platforms to communicate directly with those on rival services. It could make it easier for different companies to use products together, with the aim of helping startups and smaller companies.

People would also be able to carry their personal data—photos, videos and all—from one service to another.

“Americans deserve to have more ownership over their personal information, with the ability to seamlessly transfer their data between platforms of their choice,” says Representative Burgess Owens, the Utah Republican who is a chief sponsor of the measure.

The legislation would prohibit the tech giants from favoring their own products and services over competitors on their platforms.

An example: Some independent merchants who sell products on Amazon.com have complained to lawmakers about the e-commerce giant’s practices, such as contract provisions and policies said to prevent sellers from offering their products at lower prices or on better terms on any other online platform, including their own websites. Under the legislation, could Amazon be forced to spin off its private-label products that compete with vendors on the platform?

The Seattle company has said that sellers set their own prices for the products they offer on its platform. “Amazon takes pride in the fact that we offer low prices across the broadest selection, and like any store we reserve the right not to highlight offers to customers that are not priced competitively.”

Lawmakers want to make it tougher for giant tech companies to snap up competitors in mergers, which they have completed by the hundreds in recent years, waved through by antitrust enforcers in both Republican and Democratic administrations.

Acquisitions that would eliminate competitors or potential competitors, or expand or entrench the market power of online platforms could be expected to be blocked by regulators.

The burden would shift from the government to the companies to show that a particular merger would not harm competition.

Lastly, the legislation would give the Federal Trade Commission more money, and states more power, to enforce the antitrust laws against companies.

It would increase FTC filing fees for any proposed tech mergers worth over $500 million and cut the fees for those below that level. Many state attorneys general have pursued antitrust cases against Big Tech companies, and many states joined with the U.S. Justice Department and the FTC in their landmark antitrust lawsuits against Google and Facebook, respectively, last year.