This website requires the use of Javascript to function correctly. Performance and usage will suffer if it remains disabled.
How to Enable Javascript
Ethiopia Conflict: Tigray Opposition Parties Assert 50,000-plus Civilian Deaths 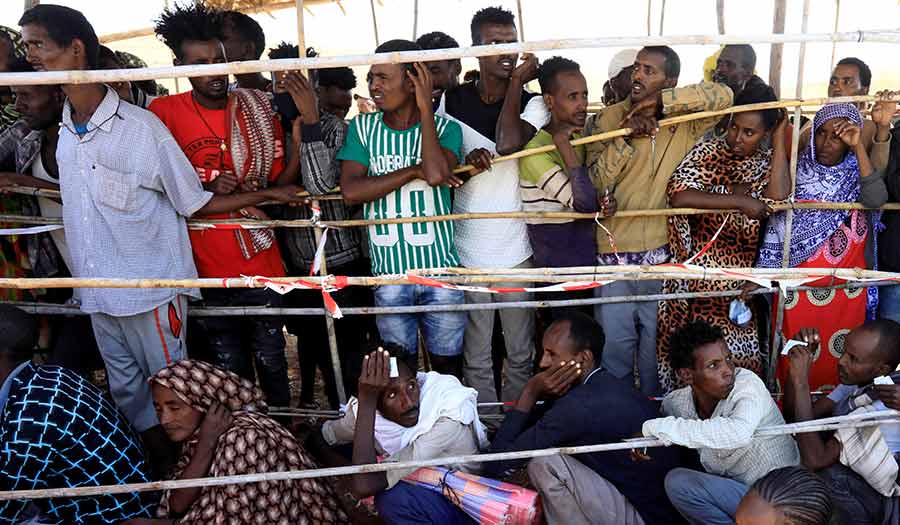 Ethiopians who fled the ongoing fighting in Tigray region gather to receive relief aid at the Um-Rakoba camp on the Sudan-Ethiopia border, in Kassala state, Sudan (Dec. 17, 2020).

NAIROBI, Kenya (AP) – A trio of opposition parties in Ethiopia’s embattled Tigray region estimates that more than 50,000 civilians have been killed in the three-month conflict, and they urge the international community to intervene before a “humanitarian disaster of biblical proportion will become a gruesome reality.”

The statement posted Tuesday does not say where the estimate comes from, and the parties could not immediately be reached. Communication links remain challenging in much of the region, making it difficult to verify claims by any side.

No official death toll has emerged since the fighting began in early November between Ethiopian and allied forces and those of the Tigray region who dominated the government for almost three decades before Prime Minister Abiy Ahmed took office in 2018. Each side now views the other as illegitimate.

The opposition parties say the international community should ensure the immediate withdrawal of fighters including soldiers from neighboring Eritrea, who witnesses say are supporting Ethiopian forces. The parties also urge an independent investigation into the conflict, dialogue, more humanitarian aid and media access to “cover what is happening.”

Civilians throughout Tigray, a region of some 6 million people, have been dying from targeted attacks, crossfire, disease and lack of resources, according to witnesses. Even some of the new administrators appointed by Abiy’s government have warned that people are dying of starvation as vast areas beyond main roads and towns still cannot be reached.

The opposition parties assert that the hunger is man-made as cattle have been killed and raided, crops burned and homes looted and destroyed. The statement was signed by the Tigray Independence Party, the National Congress of Great Tigray and Salsay Weyane Tigray.

Their statement accuses Ethiopia’s government of “using hunger as a weapon to subdue Tigray since it has been obstructing international efforts for humanitarian assistance.” Ethiopia’s government, however, has asserted that aid is being delivered and nearly 1.5 million people have been reached.

The United Nations and others have pressed for more humanitarian access and a solution to a complicated system of clearances with a variety of authorities, including ones on the ground.

“In 40 years [as] a humanitarian, I’ve rarely seen an aid response so impeded,” the head of the Norwegian Refugee Council, Jan Egeland, tweeted on Monday.

U.N. refugee chief Filippo Grandi after a visit to Tigray told reporters on Monday that the situation is “extremely grave.” He said his team had heard a “very strong appeal” from appointed authorities in Tigray and Ethiopian ministries for more international help, and he pointed out that the U.N. works in “northern Syria, in Yemen, in areas of high insecurity.”

The Tigray region hosted 96,000 refugees from Eritrea before the fighting, and Mr. Grandi said he had spoken to some who were caught in the crossfire and then resorted to “eating leaves” after being cut off from support for several weeks. Others were forcibly returned to Eritrea by Eritrean forces, he said. It was not clear how many.

Two of the refugees’ four camps remain inaccessible, and “most likely there is no refugee presence here anymore,” he said. Citing satellite imagery, the U.K.-based DX Open Network nonprofit this week reported further destruction at the Hitsats and Shimelba camps in recent weeks by unnamed armed groups, with humanitarian facilities among those targeted.

Up to 20,000 of the refugees have been “dispersed” into areas where humanitarian workers don’t have access, Mr. Grandi said.

The U.N. refugee chief also called for an independent, transparent investigation into alleged abuses. “The situation is very complex,” he said. “There has been a lot of crossfire, a lot of violations on all sides,” including Tigray-allied fighters.

Pressure continued Tuesday as Germany said Chancellor Angela Merkel in a phone call with Abiy “underscored the significance of a peaceful solution to the conflict in the Tigray region and of humanitarian supplies to the people affected.” Ms. Merkel added that “humanitarian aid organizations and media must be granted free access.”