This website requires the use of Javascript to function correctly. Performance and usage will suffer if it remains disabled.
How to Enable Javascript
‘The World is Watching’: Ugandans Vote in Tense Election

‘The World is Watching’: Ugandans Vote in Tense Election 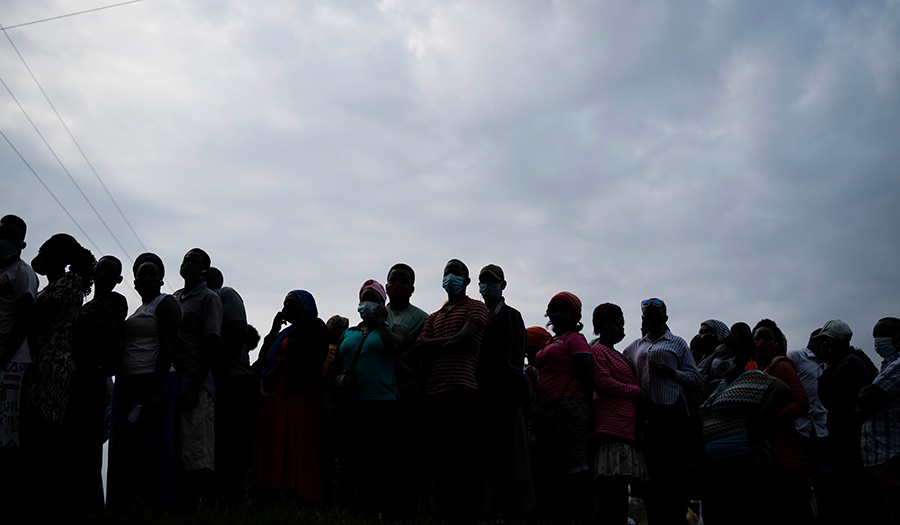 KAMPALA, Uganda (AP) – Ugandans voted Thursday in a presidential election tainted by widespread violence that some fear could escalate as security forces try to stop supporters of leading opposition challenger Bobi Wine from monitoring polling stations. Internet access has been cut off.

Long lines of voters snaked into the distance in the capital, Kampala. “This is a miracle,” mechanic Steven Kaderere said. “This shows me that Ugandans this time are determined to vote for the leader they want. I have never seen this before.”

But delays were seen in the delivery of polling materials in some places, including where Mr. Wine voted. After he arrived to the cheers of a crowd and cast his ballot, he made the sign of the cross, then raised his fist and smiled.

“Everybody was scared, they thought I would not cast my vote. Here I am coming from the polling station,” Mr. Wine told local broadcaster NTV Uganda. “I want to assure Ugandans that we can and indeed will win. Whether or not [the electoral commission chief] declares that, that is his business.”

Results are expected within 48 hours of polls closing at 4 p.m. More than 17 million people are registered voters in this East African country of 45 million people. A candidate must win more than 50 percent to avoid a runoff vote.

Longtime President Yoweri Museveni, an authoritarian who has wielded power since 1986, seeks a sixth term against a strong challenge from Mr. Wine, a popular young singer-turned-opposition lawmaker. Nine other challengers are trying to unseat Mr. Museveni.

After voting, the president was asked if he would accept the election’s outcome and said “of course” but quickly added, “if there are no mistakes.”

Mr. Wine, whose real name is Kyagulanyi Ssentamu, has seen many associates jailed or go into hiding as security forces crack down on opposition supporters they fear could mount a street uprising leading to regime change. Mr. Wine insists he is running a nonviolent campaign.

Mr. Wine, of the National Unity Platform party, has said he does not believe the election is free and fair. He has urged supporters to linger near polling stations to protect their votes. But the electoral commission, which the opposition sees as weak, has said voters must return home after casting ballots.

“Our polling agents and our polling coordinators and polling assistants are on the run because they are being surrounded and being pursued by the police and the military as if they are criminals,” Mr. Wine told reporters Thursday.

Internet access was cut Wednesday night. “No matter what they do, the world is watching,” he tweeted.

Problems were reported with some biometric machines to verify voters. “Our kit failed to start because mismatching passwords,” said Derrick Lutakoma, the presiding officer at one polling station.

“This election has already been rigged,” another opposition candidate, Patrick Oboi Amuriat, told NTV as polls opened, adding that “we will not accept the outcome of this election.”

The government’s decision this week to shut down access to social media in retaliation over Facebook’s removal of Museveni-linked Ugandan accounts accused of inauthentic behavior was meant “to limit the eyes on the election and, therefore, hide something,” said Crispin Kaheru, an independent election observer.

The 76-year-old Museveni’s support has traditionally been concentrated in rural areas where many credit him with restoring a sense of peace and security that was lost during the regimes of dictators including Idi Amin.

Security forces have deployed heavily in the area that encompasses Kampala, where the opposition has strong support partly because of rampant unemployment even among college graduates.

“Museveni is putting all the deployments in urban areas where the opposition has an advantage,” said Gerald Bareebe, an assistant professor of political science at Canada’s York University. “If you ask many Ugandans now, they say the ballot paper is not worth my life.”

Some young people said they would vote despite the apparent risks.

“This government has ruled us badly. They have really squeezed us,” said Allan Sserwadda, a car washer. “They have ruled us for years and they say they have ideas. But they are not the only ones who have ideas.”

At least 54 people were killed in Uganda in November as security forces put down riots provoked by the arrest of Mr. Wine for allegedly violating campaign regulations aimed at preventing the spread of the coronavirus.

Mr. Wine has captured the imagination of many in Uganda, and elsewhere in Africa, with his bold calls for the retirement of Museveni, whom he sees as a part of a corrupt old guard.

Mr. Museveni has dismissed the 38-year-old Mr. Wine as “an agent of foreign interests” who cannot be trusted with power. Mr. Wine has been arrested many times on various charges but has never been convicted.

“I grew up when he was president. Even my children have been born when he is president,” taxi driver Mark Wasswa said as voting began. “We also want to see another person now.”

The rise of Mr. Wine as a national leader without ties to the regime has raised the stakes within the ruling National Resistance Movement party.

“[Ruling] party members and supporters ought to know that this is a watershed election to shape, determine and install a Museveni successor,” government spokesman Ofwono Opondo recently wrote in the Sunday Vision newspaper.

The African Union and East African bloc have deployed election observer missions but the European Union said “an offer to deploy a small team of electoral experts was not taken up. The role of local observers will be even more important than before.”

The EU, U.N. and others have warned Uganda’s security forces against using excessive force.

Ugandan elections are often marred by allegations of fraud and alleged abuses by the security forces. The country has never witnessed a peaceful handover of power since independence from Britain in 1962.