This website requires the use of Javascript to function correctly. Performance and usage will suffer if it remains disabled.
How to Enable Javascript
Arab Uprisings Increase Israeli-Palestinian Tensions 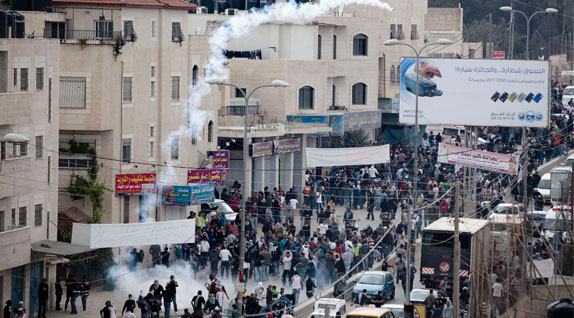 Uprisings in Arab nations surrounding Israel, the Palestinian Authority (PA) stating they are preparing for a United Nations bid for statehood in September, and political jockeying from the United States and Europe has left Israel uneasy about the coming months.

According to Haaretz, “The Palestinian Authority plans to approach the United Nations Security Council in July to begin the process of getting Palestine recognized as a full member of the United Nations and to assure a vote on the matter by the General Assembly in September…”

United States President Barack Obama said America would vote “no” on the PA’s bid for statehood. Mr. Obama had previously stated that his support of Israel was “unshakable,” but that he thinks the “borders of Israel and Palestine should be based on the 1967 lines with mutually agreed swaps.”

Speaking to the U.S. Congress, Israel’s Prime Minister Benjamin Netanyahu called the pre-1967 borders indefensible. He further stated that even with the border shift, the PA would likely not accept peace.

“You see, our conflict has never been about the establishment of a Palestinian state,” he stated. “It has always been about the existence of the Jewish state. This is what this conflict is about. In 1947, the United Nations voted to partition the land into a Jewish state and an Arab state. The Jews said yes. The Palestinians said no. In recent years, the Palestinians twice refused generous offers by Israeli Prime Ministers, to establish a Palestinian state on virtually all the territory won by Israel in the Six Day War.”

To gain support in the UN General Assembly, the PA is increasingly looking to Europe to support its cause. While Germany will almost certainly not recognize a Palestinian state, French President Nicolas Sarkozy has voiced his support, and British Prime Minister David Cameron has hinted at the possibility of backing an independent Palestine.

Tensions have also increased due to the numerous uprisings across the Arab world.

The Christian Science Monitor reported, “Israel got its first real taste of the Arab spring Sunday [May 15, 2011] as tens of thousands of Palestinians and their supporters amassed on its borders to protest its creation 63 years ago—an event they refer to as the ‘nakba,’ or catastrophe…Ten people were killed and hundreds injured as some protesters attempted to breach Israel’s borders and clashes broke out with Israeli security forces.”

Following the government shift in February, Egypt removed travel restrictions for its shared border with Gaza for the first time in four years. According to Bloomberg, “Egypt’s decision to scale back crossing restrictions for the Gaza Strip has been welcomed by the Hamas Islamic movement, which controls the Palestinian enclave, while raising concern in Israel that the wider border access poses a security threat.”

Israel’s relations with Egypt, a longtime ally of the nation, remain uncertain.

Egypt-based newspaper Al-Ahram stated, “Regardless of which type of government ultimately emerges [in Egypt], Israel is extremely nervous at the changes taking place in the Arab world. The majority of Israeli political elites, regardless of their position in government or on the political spectrum, believe that democracy, by its very nature, responds to popular feelings and moods, which politicians exploit in order to gain support…They further fear that if the nascent democracies assume an Islamist character, Israel will not only be facing Hizbullah and Hamas, but a plethora of new versions of these organisations spread across the Arab world.”