This website requires the use of Javascript to function correctly. Performance and usage will suffer if it remains disabled.
How to Enable Javascript
Should Washington Regulate Social Media?

A global outage and a whistleblower’s claims have put social media giants in the limelight. Does this signal the need for more government regulation? 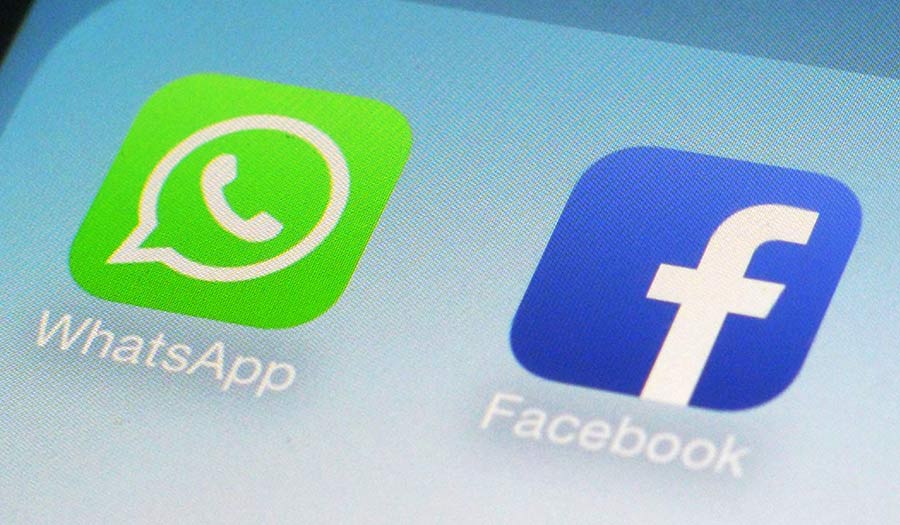 AP/Patrick Sison
WhatsApp and Facebook app icons on a smartphone.

A six-hour outage of Facebook and its Instagram and WhatsApp platforms that plunged the services and the businesses and people who rely on them into chaos seemed to come at the worst time for the social media giant.

Though the global outage was a headache for many casual users, it was far more serious for the millions of people worldwide who rely on the social media sites to run their businesses or communicate with relatives, fellow parents, teachers or neighbors.

Yet the outage also came amid a separate crisis at Facebook, accused by a whistleblower of profiting from hate and division and suppressing research showing that Instagram contributes to body-image problems, eating disorders and suicidal thoughts in young women.

While accusing the social network of pursuing profits over safety, Ms. Haugen told Congress she believes stricter government oversight could alleviate the dangers the company poses, from harming children to inciting political violence to fueling misinformation.

Efforts to pass new regulations on social media have failed in the past, but senators said on October 5 that new revelations about Facebook show the time for inaction has ended.

Ms. Haugen presented a wide-ranging condemnation of Facebook. She accused the company of failing to make changes to Instagram after internal research showed apparent harm to some teens and being dishonest in its public fight against hate. Ms. Haugen’s accusations were buttressed by tens of thousands of pages of internal research documents she secretly copied before leaving her job in the company’s civic integrity unit.

But she also offered ideas about how Facebook’s social media platforms could be made safer. Ms. Haugen laid responsibility for the company’s profits-over-safety strategy right at the top, with CEO Mark Zuckerberg, but she also expressed empathy for Facebook’s dilemma.

Ms. Haugen, who says she joined the company in 2019 because “Facebook has the potential to bring out the best in us,” said she did not leak internal documents to a newspaper and then come before Congress in order to destroy the company or call for its breakup, as many consumer advocates and lawmakers of both parties have called for. Rather, she told lawmakers that new regulations are needed to force Facebook to improve its own platforms.

Ms. Haugen is a 37-year-old data expert from Iowa with a degree in computer engineering and a master’s degree in business from Harvard. Prior to being recruited by Facebook, she worked for 15 years at tech companies including Google, Pinterest and Yelp.

“Facebook’s products harm children, stoke division and weaken our democracy,” Ms. Haugen said. “The company’s leadership knows how to make Facebook and Instagram safer but won’t make the necessary changes because they have put their astronomical profits before people.”

“Congressional action is needed,” she said. “They won’t solve this crisis without your help.”

He did, however, appear to agree with Ms. Haugen on the need for updated internet regulations, saying that would relieve private companies from having to make decisions on social issues on their own.

“We’re committed to doing the best work we can, but at some level the right body to assess tradeoffs between social equities is our democratically elected Congress,” Mr. Zuckerberg wrote.

Ms. Haugen said she believed Facebook did not set out to build a destructive platform. “I have a huge amount of empathy for Facebook,” she said. “These are really hard questions, and I think they feel a little trapped and isolated.”

But “in the end, the buck stops with Mark,” Ms. Haugen said, referring to Mr. Zuckerberg, who controls more than 50 percent of Facebook’s voting shares.

After the November election, Facebook dissolved the civic integrity unit where Ms. Haugen had been working. That was the moment, she said, when she realized that “I don’t trust that they’re willing to actually invest what needs to be invested to keep Facebook from being dangerous.”

Public Opinion and You

The American populace on the whole holds mistrust of social media giant’s ethics. A Public Affairs Pulse survey in 2015 from the Public Affairs Council found that only 10 percent of Americans trust major companies to behave ethically, while 46 percent did not have much or any trust in them. In addition, 42 percent of Americans said that CEOs have low ethical standards, while only 11 percent felt the same toward non-management employees.

And therein lies the problem. People do not trust companies that gather data mostly because they do not trust the people who run those companies. And, unlike machines, people can sometimes have malicious intent.

But putting trust in humans—especially ones in leadership positions—is a slippery slope when human nature is at play. The record of history increasingly shows human nature includes breaches of trust. (It is no wonder videos showing people performing good acts to “restore your faith in humanity” proliferate YouTube.)

All human beings possess human nature. The selfishness, rottenness, violence and terrible evils that spring from human nature have plagued the world for thousands of years. The apostle John said, “The whole world lies in wickedness” (I John 5:19). The cause of this condition lies directly at the feet of evil human nature, as Jesus Christ pointed out: “From within, out of the heart of men, proceed evil thoughts, adulteries, fornications, murders, thefts, covetousness, wickedness, deceit, lasciviousness, an evil eye, blasphemy, pride, foolishness: all these evil things come from within, and defile the man” (Mark 7:20-23).

At its worst, human nature can be deadly. At the same time, we need and rely on people—and the companies they run—to help us manage our lives. Currently, the self-preservation aspect of human nature forces Big Tech executives, managers and employees to behave at least ethically enough to ensure your data is not misused and remains as protected as possible.

And even if governments were to step in, no amount of legislation can address the real issue—what is in the hearts of the managers and even the users who generate and consume social media content.

For more biblical insight on this topic, read our articles Should You Trust Big Tech? and Social Media Censorship.