This website requires the use of Javascript to function correctly. Performance and usage will suffer if it remains disabled.
How to Enable Javascript
A Grim Chronology of Mass Shootings in the United States

A Grim Chronology of Mass Shootings in the United States 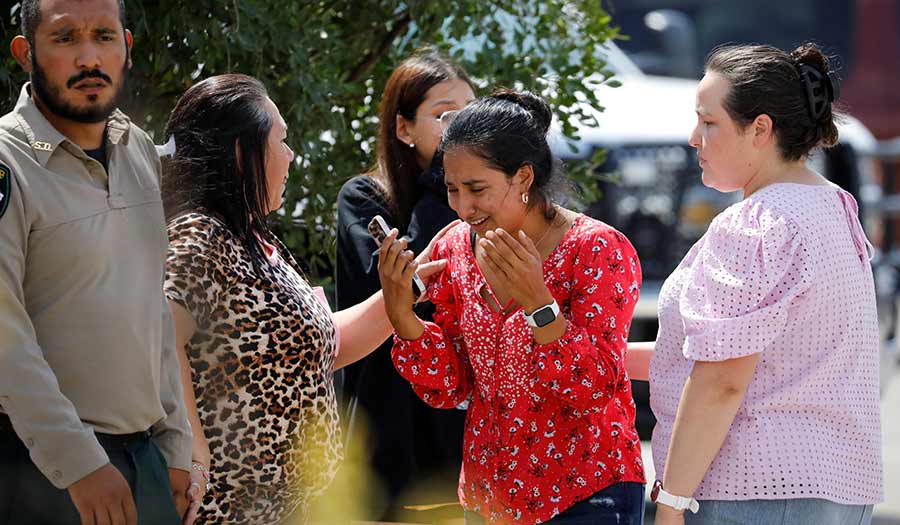 Reuters/Marco Bello
A woman reacts outside the Ssgt Willie de Leon Civic Center, where students had been transported from Robb Elementary School after a shooting in Uvalde, Texas (May 24, 2022).

The suspect was killed in the midday shooting at the Robb Elementary School in the town of Uvalde, Texas, about 80 miles west of San Antonio.

The rampage is the latest in a string of high-profile mass shootings. The United States experienced 61 “active shooter” incidents last year, up sharply in the number of attacks, casualties and geographic distribution from 2021 and the highest tally in over 20 years, the FBI reported this week.

• Buffalo, May 14, 2022 – A white gunman killed 10 black people inside a supermarket in a racially motivated attack. He was charged and remains in jail without bail.

• New York City, April 12, 2022 – In one of the most violent attacks in the history of New York’s transit system, 23 people were wounded when a 62-year-old man activated a smoke bomb and opened fire in a subway. He was taken into custody the next day.

• Oxford, November 30, 2021 – Four students were killed and seven other people were wounded after a teenager opened fire at a high school in Oxford, Michigan.

• Indianapolis, April 16, 2021 – A former FedEx employee who had been under psychiatric care shot eight people dead and injured several others at an Indiana facility of the shipping company before taking his own life.

• Los Angeles, March 31, 2021 – Four people were killed, one of them a child, in a shooting at an office building in suburban Los Angeles before the suspect was taken into custody.

• Boulder, March 22, 2021 – A mass shooting at a supermarket in Boulder, Colorado, left 10 people dead, including a police officer.

• Atlanta, March 16, 2021 – Eight people, including six women of Asian descent, were shot dead in a string of attacks at day spas in and around Atlanta. A male suspect was arrested.

• El Paso, August 3, 2019 – A man fatally shot 22 people at a Walmart store in El Paso, Texas. A statement, believed to have been written by the suspect, called the attack “a response to the Hispanic invasion of Texas.” Authorities arrested the shooter.

• Virginia Beach, May 31, 2019 – A disgruntled public utility employee opened fire on co-workers at a municipal building in Virginia, killing 12 people before he was fatally shot by police.

• Aurora, February 15, 2019 – A man opened fire at an Illinois factory after being fired, killing five workers before he was slain by police.

• Thousand Oaks, November 7, 2018 – A former Marine combat veteran killed 12 people in a bar in Thousand Oaks, California, a suburb of Los Angeles. He then killed himself.

• Pittsburgh, October 27, 2018 – A gunman burst into the Tree of Life synagogue near Pittsburgh and fired on congregants gathered for a Sabbath service, killing 11.

• Santa Fe, May 18, 2018 – A 17-year-old student opened fire at his high school outside Houston, Texas, killing nine students and a teacher, before surrendering to officers.

• Sutherland Springs, November 5, 2017 – A man thrown out of the U.S. Air Force for beating his wife and child shot 26 people fatally at a rural Texas church where his in-laws worshipped before killing himself.

• Las Vegas, October 1, 2017 – A gunman opened fire on a country music festival from a 32nd-floor hotel suite, killing 58 people before taking his own life.

• San Bernadino, December 2, 2015 – A husband and wife killed 14 people at a workplace holiday party in San Bernardino in Southern California before dying in a shootout with police.

• Roseburg, October 1, 2015 – A gunman stalked onto an Oregon college campus and opened fire, killing nine people before police shot him to death.

• Charleston, June 17, 2015 – A white supremacist killed nine black churchgoers at a church in Charleston, South Carolina. He was sentenced to death.

• Washington, September 16, 2013 – A former Navy reservist working as a government contractor killed 12 people at the Washington Navy Yard. He was shot dead by police.

• Newtown, December 14, 2012 – A heavily armed gunman killed 26 people, including 20 children from five- to 10-years old, in a rampage at Sandy Hook Elementary School in Connecticut.