This website requires the use of Javascript to function correctly. Performance and usage will suffer if it remains disabled.
How to Enable Javascript
Israel’s PM Bennett Emerges as a Mediator in Russia-Ukraine War 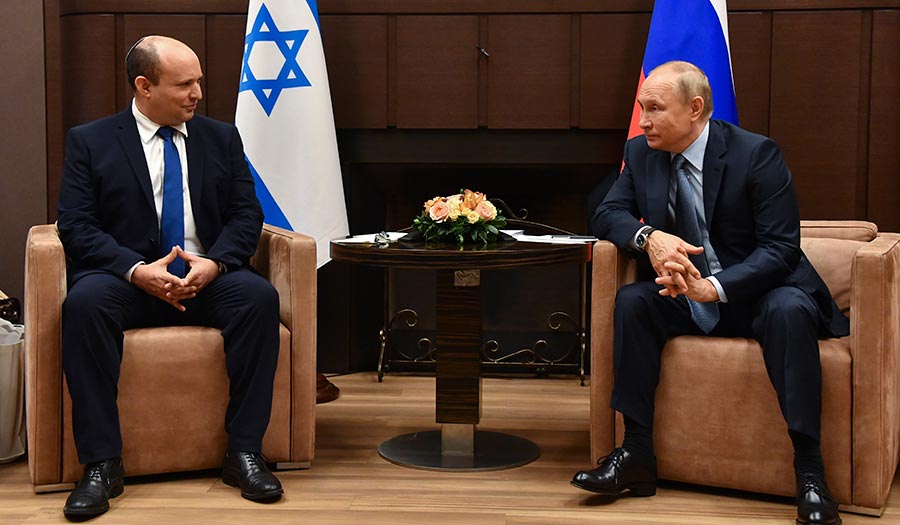 JERUSALEM (AP) – A year ago, Naftali Bennett was struggling for his political survival as Israel headed toward its fourth consecutive election. Today, the Israeli prime minister is at the forefront of global efforts to end the war in Ukraine.

Just as Mr. Bennett took advantage of unique circumstances to become the most unlikely of prime ministers, he has managed to leverage Israel’s good relations with both Ukraine and Russia and his personal rapport with their leaders to turn himself into an unexpected mediator.

Although he has not yet delivered any major diplomatic breakthroughs, he is one of the few world leaders to speak regularly to both sides, providing a rare glimmer of hope for ending the 3-week-old war.

Mr. Bennett himself has said little in public about his mediation since making a surprise visit to Moscow for talks with President Vladimir Putin on March 5. His office says there have been two more phone calls with Mr. Putin and six with Ukrainian President Volodymyr Zelenskyy.

Mr. Bennett describes his efforts as a moral obligation to do whatever is possible to end the fighting. Underscoring that message, Mr. Bennett flew to Moscow to meet Mr. Putin on the Jewish sabbath, when observant Jews like himself do not travel unless it is a life-saving situation.

“Israel will continue to act to prevent bloodshed and bring the sides from the battlefield to the conference table,” Mr. Bennett said this week.

While Israel is well over 1,000 miles from the war zone, its involvement is not entirely surprising.

Israel’s ties with Russia and Ukraine run deep. Both countries have large Jewish communities, and over 1 million Jews from the region have moved to Israel since the collapse of the Soviet Union three decades ago.

Mr. Zelenskyy, who is Jewish, appears to have an affinity for Israel, while the Israeli and Russian militaries have maintained close communications in recent years to prevent clashes in the sky over Syria. Russia has provided support to Syrian President Bashar Assad in the civil war, while Israel often strikes what it says are enemy Iranian and Hezbollah targets aligned with Mr. Assad on the territory of its neighbor.

Beyond Israel’s geopolitical strengths, Mr. Bennett’s personality also appears to be a factor.

In last year’s election, Mr. Bennett’s tiny Yamina party barely squeaked into parliament with just seven of the chamber’s 120 seats. But Mr. Bennett positioned himself as a kingmaker, providing the critical votes to form a majority coalition. That allowed him to become prime minister in a power-sharing agreement that ousted his former mentor, Benjamin Netanyahu, from the top job.

Mr. Bennett, a former high-tech executive who led two companies that were later sold in nine-figure deals, has shown similar creativity in office. Long before the war, he moved quickly to establish good working relations with world leaders, including President Joe Biden as well as Mr. Putin and Mr. Zelenskyy. His mediation efforts were first encouraged by Germany, and he carefully coordinates his activities with Washington and other Western allies.

This calibrated approach appears to have gained the trust of both sides. Mr. Zelenskyy’s chief of staff, Andriy Yermak, this week pinned hopes on Israeli negotiating efforts.

“Israel took upon itself the difficult but noble mission of mediator in the search of peace and an end to Russia’s aggression against Ukraine,” he said.

Mr. Zelenskyy previously said he believed Mr. Bennett could play an “important role” and even suggested that Israel might be a host for future cease-fire talks. That would mark a major accomplishment for Mr. Bennett.

Toward that end, Mr. Bennett has been careful to maintain a relative air of neutrality. While Israeli Foreign Minister Yair Lapid has repeatedly condemned Russia’s invasion, Mr. Bennett’s criticism has been muted. Israel has delivered humanitarian aid to Ukraine, but has not joined its Western allies in sending military assistance or imposing sanctions on Russia and the many Russian-Jewish oligarchs who have second homes in Israel.

At times, Mr. Bennett’s refusal to be tougher against Russia has drawn criticism at home and abroad. But it appears to have allowed him to retain Mr. Putin’s trust.

Israeli officials have been careful not to exaggerate Mr. Bennett’s role and say he is not actively making proposals or pressuring the sides. Instead, they describe him as a channel of communication, passing messages from the sides in what they describe as a frank and realistic manner.

The officials, speaking on condition of anonymity because they were discussing diplomatic efforts, say there has been a “positive shift” in the rhetoric from both sides. Mr. Zelenskyy acknowledged in the most explicit terms yet Tuesday that Ukraine’s goal of joining NATO is unlikely to be met, while Mr. Putin appears to have backed away from earlier comments questioning Ukraine’s right to exist as an independent country.