This website requires the use of Javascript to function correctly. Performance and usage will suffer if it remains disabled.
How to Enable Javascript
UN Body Weighs a Global Treaty to Fight Plastic Pollution 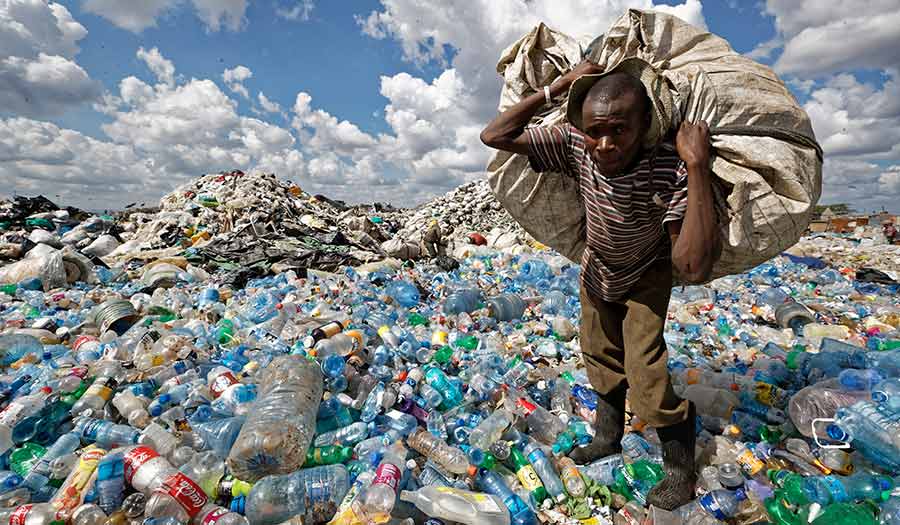 AP/Ben Curtis
A man walks on a mountain of plastic bottles as he carries a sack of them to be sold for recycling after weighing them at the dump in the Dandora slum of Nairobi, Kenya (Dec. 5, 2018).

The UN Environment Assembly, meeting February 28 to March 2 in Kenya’s capital Nairobi, is expected to propose an international framework to address the growing problem of plastic waste in the world’s oceans, rivers and landscape.

During preparations for the session, Ms. Andersen implored member states to take the opportunity to reshape humanity’s “relationship with plastic once and for all” by developing a comprehensive global agreement to combat the problem.

Two major proposals have emerged during years of international discussions about ways to reduce single use plastic.

The first, by Peru and Rwanda, calls for a full spectrum approach to plastic pollution, covering raw materials extraction, plastic production, as well as plastic use and disposal. It urges creation of “an international legally binding agreement…to prevent and reduce plastic pollution in the environment, including micro plastics.”

The proposal is co-sponsored by Chile, Colombia, Costa Rica, Ecuador, Guinea, Kenya, Madagascar, Norway, the Philippines, Senegal, Switzerland, the United Kingdom and Uganda along with the European Union.

A second proposal, sponsored by Japan, calls for an international agreement “to address marine plastic pollution covering the whole life cycle and promoting resource efficiency and circular economy,” including reuse.

Both proposals envision establishment of a negotiating committee to complete the new plastic treaty by 2024.

If such a plastics treaty is endorsed by the UN Environment Assembly, Ms. Andersen said it “would be the most significant global; environmental governance decision since the Paris [Climate] Agreement in 2015.”

“Over 140 countries have declared support for opening negotiations on a global plastic treaty,” said Erastus Ooko, the plastics engagement lead for Greenpeace Africa.

“However, support for negotiations is not enough,” Mr. Ooko said. “These countries should be calling for a legally binding treaty that will match the scale and depth of the plastics crisis.”