This website requires the use of Javascript to function correctly. Performance and usage will suffer if it remains disabled.
How to Enable Javascript
Thousands of Cranes Killed by Bird Flu in Northern Israel

Thousands of Cranes Killed by Bird Flu in Northern Israel 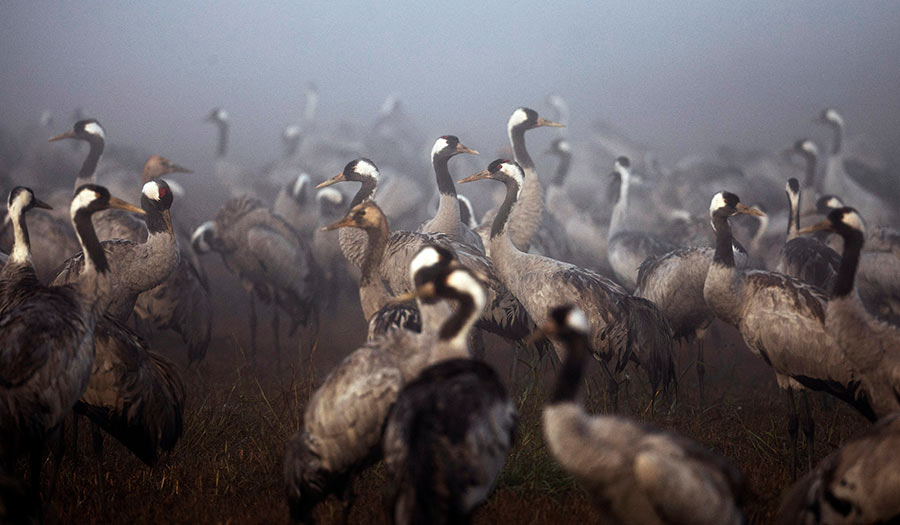 Reuters/Ronen Zvulun
Cranes gather during the migration season on a foggy morning at Hula Nature Reserve, in northern Israel (Nov. 17, 2020).

JERUSALEM (AP) – A bird flu outbreak in northern Israel has killed at least 5,200 migratory cranes and forced farmers to slaughter hundreds of thousands of chickens as authorities try to contain what they say is the deadliest wildlife disaster in the nation’s history.

Uri Naveh, a senior scientist at the Israel Parks and Nature Authority, said the situation is not yet under control.

“Many of the birds are dead in the middle of the water body so it’s difficult for them to be taken out.” he said Monday.

Environmental Protection Minister Tamar Zandberg called the crisis “the most serious damage to wildlife in the history of the country.”

“The extent of the damage is still unclear,” she tweeted.

Yaron Michaeli, spokesman for the Hula Lake park, where the crane population is centered, said workers were removing the carcasses as quickly as possible, fearing they could infect other wildlife.

Dafna Yurista, spokeswoman for the Agriculture Ministry, said half a million chickens in the area were being slaughtered to prevent the disease from spreading.

About 500,000 cranes pass through Israel each year on the way to Africa and a small number stay behind, Mr. Michaeli said. This year, an estimated 30,000 cranes stayed in Israel for the winter.

Mr. Michaeli said it is believed that the cranes were infected by smaller birds that had contact with farms suffering from outbreaks.

Israeli media carried photos of workers in white hazmat suits collecting crane carcasses after the birds were first found to be sick about 10 days ago.

Mr. Michaeli said the death toll among cranes appears to have stabilized in recent days.

“This is a good sign,” he said. “They might be starting to get over this. We hope very much.”

Prime Minister Naftali Bennett’s office said officials from the agriculture, environment and health ministries were monitoring the situation. There was no immediate information about infections among people, it said.

The cleanup is going more slowly than expected. “We are trying to see if there’s any other solutions,” Mr. Naveh said.