This website requires the use of Javascript to function correctly. Performance and usage will suffer if it remains disabled.
How to Enable Javascript
What Is the Risk of a War Between Russia and Ukraine?

What Is the Risk of a War Between Russia and Ukraine? 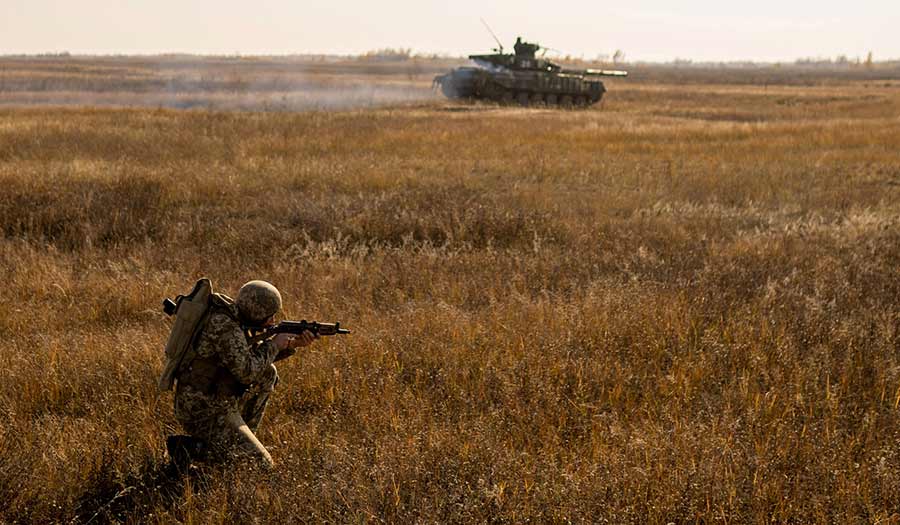 Press Service of General Staff of the Armed Forces of Ukraine/Handout via Reuters
A serviceman of the Ukrainian Armed Forces takes part in military drills at a training ground near the border with Russian-annexed Crimea in Kherson region, Ukraine (Nov. 17, 2021).

Reuters – Russian troop movements near Ukraine have drawn concern from Kyiv and the United States that it might be considering attacking its neighbor. Here is a look at some of the questions that raises.

What are the two sides saying about the risk of conflict?

Russia denies threatening anyone and says it can deploy its troops on its own territory as it pleases. It has accused Ukraine and NATO of whipping up tensions and suggested Kyiv might be preparing to try to seize back two eastern regions controlled by pro-Russian separatists since 2014. Russia’s foreign spy agency this week compared the situation with the build-up to a 2008 war in which Russia’s forces crushed those of neighboring Georgia.

Ukraine denies planning any such offensive and says Russia has more than 92,000 troops massed near its borders for a possible attack.

How likely is a Russian invasion?

Reuters spoke to more than a dozen sources, including Western intelligence officials and Russians familiar with Kremlin thinking, and nearly all agreed that an invasion is unlikely to be imminent. A more plausible scenario, they said, was that President Vladimir Putin is using the credible threat of military force to signal that Russia is serious about defending its “red lines” on Ukraine. It has stated numerous times in recent weeks that it is not prepared to accept the supply of NATO weapons to Ukraine or any NATO military presence there, let alone the prospect of eventual Ukrainian membership of the alliance. Mr. Putin, these sources added, is adept at escalating and de-escalating crises—as he did in the spring, when more than 100,000 Russian troops gathered near Ukraine’s border and subsequently pulled back. In this way, he is keeping Russia’s opponents guessing about his intentions and reminding the West that Russia is a force to be reckoned with.

Russia’s armed forces have 900,000 active personnel compared with 209,000 for Ukraine, an advantage of more than four to one, according to the International Institute for Strategic Studies (IISS). But Samir Puri, senior fellow in hybrid warfare at the IISS, said the real advantage for Russia was that it already has proxies fighting in the separatist war in eastern Ukraine, giving it the option to link up with them and extend the area already under their control. Were it to go for a broader invasion, he said, it could contemplate attacking from the north (from Russia and its ally Belarus), from the east or from the south (via Crimea, which Russia seized from Ukraine in 2014), with a naval assault on the cities of Odessa and Mariupol.

How prepared is Ukraine to defend itself?

Ukraine is significantly stronger militarily than in 2014, when it lost Crimea to Russia without a real fight. It has advanced anti-tank missiles supplied by Washington, and could draw on U.S. intelligence support. But it would still face an overwhelming adversary—the Russian advantage in battle tanks, for example, is more than three to one.

“For Ukraine, the issue would be…to resist as much as they can, pray for assistance from the West, and ultimately fight back,” said Mathieu Boulegue, a research fellow at London’s Chatham House think-tank. “If Russia invades in full, the question for Kyiv will be to mount counter-insurrection-style warfare to make the cost of invasion tremendous for Russia.”

The West imposed sanctions on Russia after the seizure of Crimea and could add painful new measures, such as preventing it from pumping Russian gas through the newly built Nord Stream 2 pipeline to Germany. Mr. Putin would risk a complete rupture of relations with the West if he invaded. It is unclear how far NATO might come to the defense of Ukraine, something that would be fraught with risk for all sides. Ukraine is not a member of NATO, but doing nothing would leave the alliance looking irrelevant.

“This is the brinkmanship game that is playing out. Both in NATO in Brussels and in Moscow there will be calculations around where the escalatory steps could lead. If NATO was to deploy to fight…the Russians would see this as an unbelievable escalation,” said Mr. Puri.

“Whether [Ukraine] ends up as a battleground I think is unlikely—but really that’s the issue that Russia and NATO are fencing around at the moment in Ukraine.”