This website requires the use of Javascript to function correctly. Performance and usage will suffer if it remains disabled.
How to Enable Javascript
EU Border Agency: Illegal Crossings on the Rise 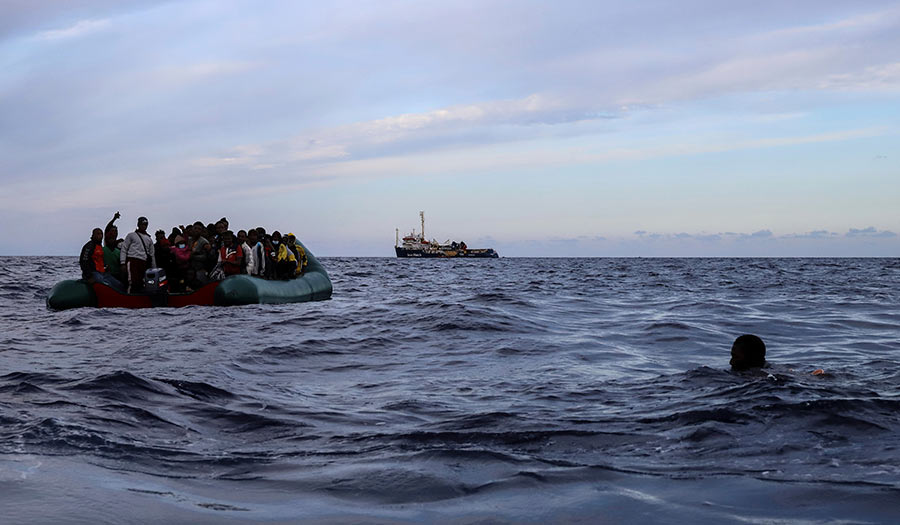 AP/Valeria Mongelli
A migrant who was aboard a precarious rubber boat with others jumps into the water as they are rescued by a sea patrol, about 35 miles away from Libya (Oct. 18, 2021).

Frontex said in a statement that 160,000 illegal border crossings were recorded in the first 10 months of this year, up 70 percent compared to the same period in 2020 and 45 percent more than in 2019. The biggest rise was at the EU’s eastern borders, in the Balkans region and via central Mediterranean Sea crossings.

Almost 8,000 people—most of them Iraqis, Afghans and Syrians—entered through the EU’s eastern frontier; a 15-fold increase over 2020, the agency said. Crossings from Belarus hit a peak of more than 3,200 in July, but had dropped to over 600 by October.

Frontex said that “while high level frictions between the EU and the Belarusian regime continue,” countries neighboring Belarus have “significantly strengthened their border-control measures under exceptional states of emergency,” and that this has stopped people moving across in large numbers.

The agency said that 48,500 crossings were reported on the “Western Balkans Route”—which many migrants traverse on foot in search of better lives or sanctuary in the relatively-wealthy 27 EU member countries. More than 9,000 entries were recorded in October, an increase of 810 percent compared to 2019.

Arrivals via the central Mediterranean also rose, reaching 6,240 in October, 186 percent more than in 2019. Frontex said a “significant development” is that a growing number of migrants are crossing by sea into Italy directly from Turkey. Most usually come from Libya and other parts of northern Africa.

More Egyptians are arriving through the central Mediterranean from Libya, it said. Separately, migration to the island of Cyprus is also on the rise.

The agency said that 16,390 illegal border crossings were reported on the western Mediterranean route, often into Spain from northern Africa, but the numbers were 23 percent less than in 2019.