This website requires the use of Javascript to function correctly. Performance and usage will suffer if it remains disabled.
How to Enable Javascript
‘Europe’s Last Dictator’ Raises the Stakes with the West

‘Europe’s Last Dictator’ Raises the Stakes with the West 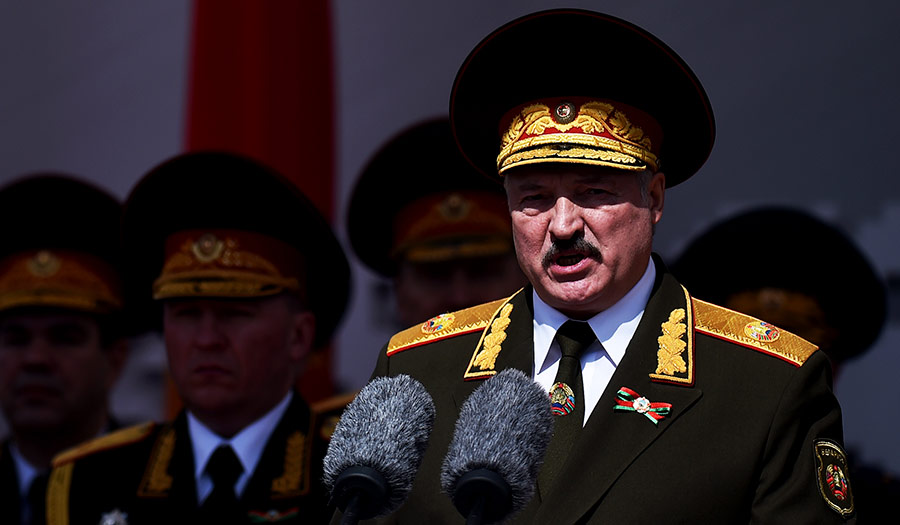 Pool Photo via AP
Belarusian President Alexander Lukashenko gives a speech during a military parade that marked the 75th anniversary of the allied victory over Nazi Germany, in Minsk, Belarus (May 9, 2020).

MOSCOW (AP) – For most of his 27 years as Belarus’ authoritarian president, Alexander Lukashenko’s repressions and truculent statements frequently offended the West. This year, that belligerence is directly affecting Europe.

His government forcefully diverted an airliner flying between Greece and Lithuania that was carrying a political opponent. As the European Union imposed sanctions for that action, Belarus responded by easing its border controls for migrants from the Middle East and Africa, allowing them to head for the EU frontier.

That has forced Poland, Latvia and Lithuania to declare a state of emergency in their border zones to halt illegal crossings. Warsaw has sent thousands of riot police and troops to bolster security, leading to tense confrontations.

Mr. Lukashenko has since raised the stakes by threatening to cut off natural gas shipments from Russia that transit Belarus—a potentially severe blow to Europe as winter settles in.

The moves are a dramatic escalation for Mr. Lukashenko, who became president in 1994 when Belarus was an obscure country that had existed less than three years.

His disdain for democratic norms and the country’s dismal human rights record has made Belarus a pariah in the West, bringing him the sobriquet of “Europe’s last dictator.”

The 67-year-old Mr. Lukashenko prefers to be styled as “Batka”—“Father” or “Dad”—a stern but wise patriarch.

Although he has made occasional moves toward rapprochement with the West, Mr. Lukashenko abandoned conciliation after massive demonstrations rose up against him in 2020 following an election to a sixth term as president. The opposition, and many in the West, rejected the outcome as rigged.

Tens of thousands of protesters were arrested, many of them beaten by police; main opposition figures either fled the country or were jailed; foreign journalists were driven out; and ordinary citizens reportedly were arrested for “unauthorized mass gatherings,” that included even birthday parties.

By suppressing opposition through such harsh actions, along with keeping much of the economy under state control, Belarus has become a neo-Soviet outlier, wary of its thriving NATO and EU neighbors. Mr. Lukashenko alternately quarreled with and cozied up to Russia.

He is noted for mercurial actions and provocative statements. In 2006, he threatened protesters by saying he would “wring their necks like a duck.”

In May, he ordered a Lithuania-bound Ryanair jetliner diverted to Minsk and arrested self-exiled opposition journalist Raman Pratasevich, who was aboard. Belarusian authorities said the action was taken after a bomb threat was made against the plane, but Western officials dismissed that as a preposterous attempt to disguise what they called an act of piracy.

Mr. Lukashenko was born in a Belarusian village and followed a conventional path for an ambitious provincial Soviet. After graduating from an agricultural academy, he became a political instructor in the border guard service and eventually rose to director of a collective farm. In 1990, he became a member of the Belarusian Supreme Soviet, the republic’s parliament.

He was its only member in 1991 to vote against the dissolution of the Soviet Union. When he won the new country’s first presidential election three years later, he appeared in many ways to be stuck in time, keeping Belarus as an eerie and dysfunctional Soviet vestige.

While neighboring ex-Soviet republics adapted to capitalism, Mr. Lukashenko kept much of the Belarusian economy under state control. That initially won him support because Belarusians did not suffer the pain of “shock therapy” economic restructuring.

But ossified state control of industries could not keep up with the market’s energy and flexibility; the Belarusian ruble was forced into repeated devaluations, and as of 2020, the average monthly wage was a paltry $480.

The country’s main security agency retained its symbolically baleful acronym of KGB. He also pushed a referendum that made the new national flag nearly identical to the one Belarus used as a Soviet republic.

When Mr. Lukashenko became president, Belarus had little experience of being an independent country; as a Soviet republic, it had been a piece of other empires with only a brief attempt at sovereignty after World War I. Sandwiched between Russia to the east and reformist, Western-looking Poland, Lithuania and Latvia, Belarus was in a strategic position.

Mr. Lukashenko leaned strongly east. In 1997, he signed an agreement with Russia on forming a “union state” of close economic, military and political ties, but stopped short of a full merger.

The agreement bolstered the economy in Belarus, which depends heavily on Russian oil at below-market prices. But Mr. Lukashenko harbored beliefs that Russia aimed to eventually take over Belarus entirely, and he was increasingly vocal about them.

As protests roiled the country in 2020 and Western pressure increased, Mr. Lukashenko had nowhere to turn for help but Moscow. President Vladimir Putin said he would be willing to send police to Belarus if demonstrations turned violent, but he never made that move.

This year, Mr. Lukashenko and Mr. Putin announced a broad range of agreements to solidify the union state, including a joint military doctrine. Although the agreements substantially increase Russia’s influence in Belarus, Mr. Lukashenko also gains assurance of support.