This website requires the use of Javascript to function correctly. Performance and usage will suffer if it remains disabled.
How to Enable Javascript
What Is the Metaverse and How Will It Work?

What Is the Metaverse and How Will It Work? 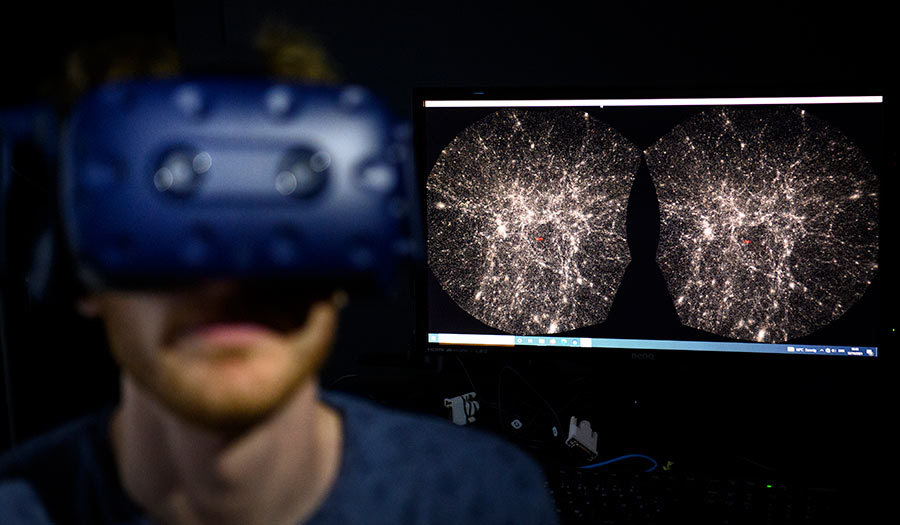 Laurent Gillieron/Keystone via AP
A software engineer explores with a virtual reality helmet the most detailed 3D map of the universe developed by Swiss Federal Institute of Technology, in St-Sulpice near Lausanne, Switzerland (Oct. 12, 2021).

The term “metaverse” is the latest buzzword to capture the tech industry’s imagination—so much so that one of the best-known internet platforms is rebranding to signal its embrace of the futuristic idea.

Facebook CEO Mark Zuckerberg’s Thursday announcement that he is changing his company’s name to Meta Platforms Inc., or Meta for short, might be the biggest thing to happen to the metaverse since science fiction writer Neal Stephenson coined the term for his 1992 novel “Snow Crash.”

But Mr. Zuckerberg and his team are hardly the only tech visionaries with ideas on how the metaverse, which will employ a mix of virtual reality and other technologies, should take shape. And some who have been thinking about it for a while have concerns about a new world tied to a social media giant that could get access to even more personal data and is accused of failing to stop the proliferation of dangerous misinformation and other online harms that exacerbate real-world problems.

What Is the Metaverse?

Think of it as the internet brought to life, or at least rendered in 3D. Mr. Zuckerberg has described it as a “virtual environment” you can go inside of—instead of just looking at on a screen. Essentially, it is a world of endless, interconnected virtual communities where people can meet, work and play, using virtual reality headsets, augmented reality glasses, smartphone apps or other devices.

It also will incorporate other aspects of online life such as shopping and social media, according to Victoria Petrock, an analyst who follows emerging technologies.

What Will I Be Able to Do in the Metaverse?

Things like go to a virtual concert, take a trip online, view or create artwork and try on or buy digital clothing.

The metaverse also could be a game-changer for the work-from-home shift amid the coronavirus pandemic. Instead of seeing co-workers on a video call grid, employees could join them in a virtual office.

Facebook has launched meeting software for companies, called Horizon Workrooms, to use with its Oculus VR headsets, though early reviews have not been great. The headsets cost $300 or more, putting the metaverse’s most cutting-edge experiences out of reach for many.

For those who can afford it, users would be able, through their avatars, to flit between virtual worlds created by different companies.

“A lot of the metaverse experience is going to be around being able to teleport from one experience to another,” Mr. Zuckerberg says.

Tech companies still have to figure out how to connect their online platforms to each other. Making it work will require competing technology platforms to agree on a set of standards, so there are not “people in the Facebook metaverse and other people in the Microsoft metaverse,” Ms. Petrock said.

Mr. Zuckerberg is going big on what he sees as the next generation of the internet because he thinks it is going to be a big part of the digital economy.

Critics wonder if the potential pivot could be an effort to distract from the company’s crises, including antitrust crackdowns, testimony by whistleblowing former employees and concerns about its handling of misinformation.

Former employee Frances Haugen has accused Facebook’s platforms of harming children and inciting political violence after copying internal research documents and turning them over to the U.S. Securities and Exchange Commission.

They also were provided to a group of media outlets, including The Associated Press, which reported numerous stories about how Facebook prioritized profits over safety and hid its own research from investors and the public.

No. Other companies talking up the metaverse include Microsoft and chipmaker Nvidia.

“We think there’s going to be lots of companies building virtual worlds and environments in the metaverse, in the same way there’s been lots of companies doing things on the World Wide Web,” said Richard Kerris, vice president of Nvidia’s Omniverse platform. “It’s important to be open and extensible, so you can teleport to different worlds whether it’s by one company or another company, the same way I go from one web page to another web page.”

Video game companies also are taking a leading role. Epic Games, the company behind the popular Fortnite video game, has raised $1 billion from investors to help with its long-term plans for building the metaverse. Game platform Roblox is another big player, outlining its vision of the metaverse as a place where “people can come together within millions of 3D experiences to learn, work, play, create and socialize.”

Consumer brands are trying to jump on the trend, too. Italian fashion house Gucci collaborated in June with Roblox to sell a collection of digital-only accessories. Coca-Cola and Clinique have sold digital tokens pitched as a stepping stone to the metaverse.

Will This Be Another Way to Get More of My Data?

Mr. Zuckerberg’s embrace of the metaverse in some ways contradicts a central tenet of its biggest enthusiasts. They envision the metaverse as online culture’s liberation from tech platforms like Facebook that assumed ownership of people’s accounts, photos, posts and playlists and traded off what they gleaned from that data.

It seems clear that Facebook wants to carry its business model, which is based on using personal data to sell targeted advertising, into the metaverse.

“Ads are going to continue being an important part of the strategy across the social media parts of what we do, and it will probably be a meaningful part of the metaverse, too,” Mr. Zuckerberg said in a recent company earnings call.

Ms. Petrock she said she is concerned about Facebook trying to lead the way into a virtual world that could require even more personal data and offer greater potential for abuse and misinformation when it has not fixed those problems in its current platforms.