This website requires the use of Javascript to function correctly. Performance and usage will suffer if it remains disabled.
How to Enable Javascript
UN: World Hunger Was Dramatically Worse in Pandemic Year 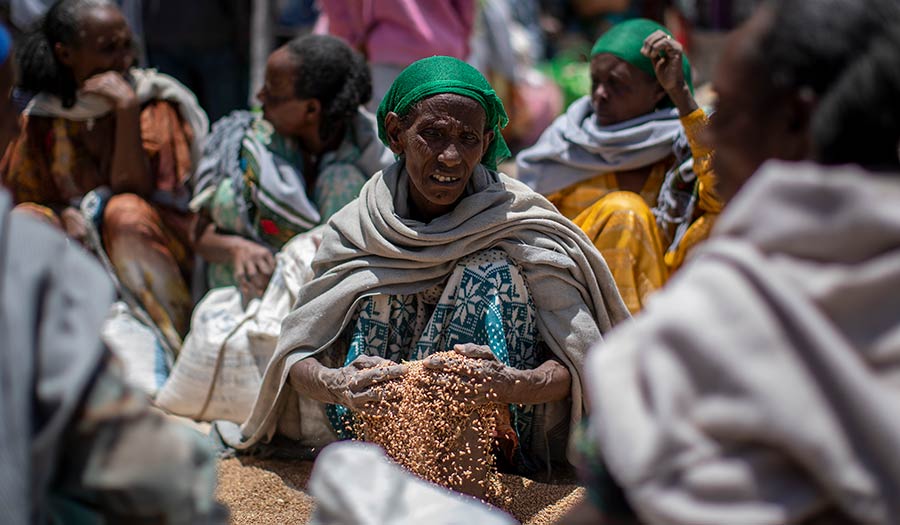 AP/Ben Curtis
An Ethiopian woman scoops up grains of wheat after it was distributed by the Relief Society of Tigray in the town of Agula, in the Tigray region of northern Ethiopia (May 8, 2021).

ROME (AP) – The United Nations on Monday lamented a “dramatic worsening” of world hunger last year, saying much of that is likely connected to the pandemic, and it urged billions of dollars to save millions of people from starving.

A report issued jointly by five UN agencies said hunger outpaced population growth in 2020, with nearly 10 percent of all people estimated to be undernourished.

It said the sharpest rise in hunger came in Africa, where 21 percent of the people—282 million—are estimated to be undernourished.

UN Secretary-General Antonio Guterres said the new “tragic data” shows that between 720 million and 811 million people in the world faced hunger last year—as many as 161 million more than in 2019.

More than 2.3 billion people, which represents 30 percent of the global population, lacked year-round access to adequate food, according to the report. This indicator, known as the prevalence of moderate or severe food insecurity, leaped in one year as much as in the five previous years combined.

“Despite a 300 percent increase in global food production since the mid-1960s, malnutrition is a leading factor contributing to reduced life expectancy,” the UN chief said. “In a world of plenty, we have no excuse for billions of people to lack access to a healthy diet. This is unacceptable.”

Emily Farr of the humanitarian organization Oxfam said the pandemic was the last straw for millions of people already battered by the impacts of conflict, economic shocks and extreme weather.

Children paid a high price, with 149 million of those younger than 5 estimated to have stunted growth since they are too short for their age, and more than 45 million children are too thin for their height, the report said. It also noted the paradoxical problem of nearly 39 million children being overweight.

“A full 3 billion adults and children remain locked out of healthy diets, largely due to excessive costs,” the UN agencies said, and COVID-19 made things worse.

“In many parts of the world, the pandemic has triggered brutal recessions and jeopardized access to food,” the United Nations said in a summary of its findings. “Yet even before the pandemic, hunger was spreading; progress on malnutrition lagged.”

“Disturbingly, in 2020 hunger shot up in both absolute and proportional terms, outpacing population growth,” the report’s authors concluded. The report said some 9.9 percent of the world’s people were estimated to have been undernourished last year, compared to 8.4 percent in 2019.

Geographically, in addition to the surge of Africans facing hunger, more than half the undernourished people—418 million—live in Asia, while 60 million live in Latin America and the Caribbean, according to the report.

Oxfam’s Farr said the new figures “are a somber reminder of how broken our global food and economic systems are.”

“More than half the world’s population did not have social protection to cope with the adverse effects of the pandemic,” she said. “Small farmers were forced to watch their crops rot during the pandemic, even when global food prices rose by 40 percent, while the biggest food companies have amassed over $10 billion of additional revenues last year.”