This website requires the use of Javascript to function correctly. Performance and usage will suffer if it remains disabled.
How to Enable Javascript
France Using Air Power to Root Out ‘Underground’ ISIS 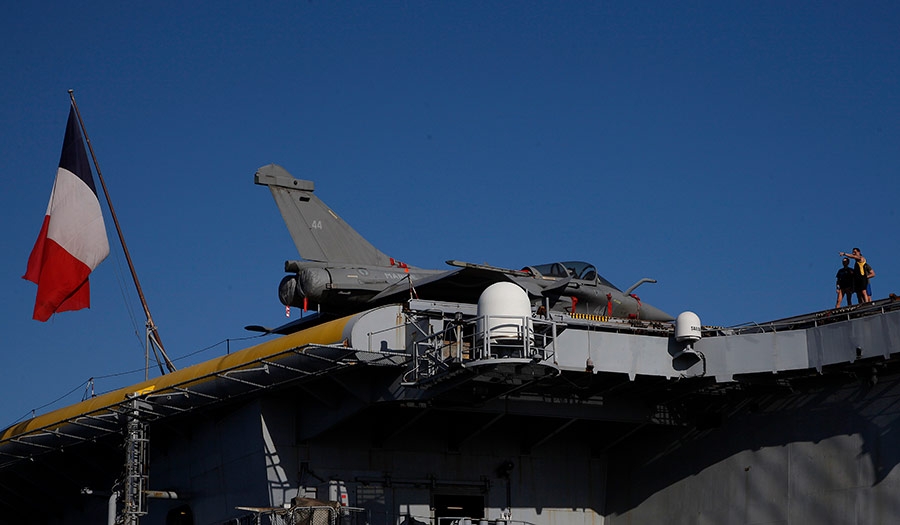 AP/Petros Karadjias
French crew members stand next to an aircraft on the nuclear-powered aircraft carrier Charles de Gaulle at Limassol port, Cyprus (May 10, 2021).

LIMASSOL, Cyprus (AP)—The Islamic State group is using stealth to regenerate its forces by developing its military capabilities underground, and France is deploying its warships and aircraft in the region to help troops on the ground root out the threat, a senior French naval officer said Monday.

Rear Admiral Marc Aussedat, who leads a task force centered around France’s nuclear-powered aircraft carrier Charles de Gaulle, said that 18 advanced Rafale fighter aircraft are carrying out reconnaissance flights in Syrian and Iraqi airspace to gauge the actions of ISIS, and to bring their weapons to bear if necessary.

“Why are we doing this mission?...First of all, is to give to these forces, coalition and Iraqi security forces, the means to fight the regeneration of Daesh on the ground. Daesh is hiding, Daesh is developing its capacity underground,” Mr. Aussedat told reporters, referring to the Islamic State group’s Arabic-language acronym.

France’s regional military muscle-flexing has manifested itself in Task Force 473, a naval force of several warships including anti-submarine frigates and an air defense destroyer that is centered around the De Gaulle. The country already has a frigate deployed in the east Mediterranean on a permanent basis.

The primary mission of the task force’s five-month deployment in the east Mediterranean, the Persian Gulf and the Indian Ocean is to assist Operation Inherent Resolve, a U.S.-led mission of forces from several countries tasked with eradicating ISIS remnants following its three-year occupation of large swaths of Syrian and Iraqi territory.

Mr. Aussedat said the French task force has also helped in the fight against piracy and international trafficking in the Persian Gulf and Indian Ocean where it temporarily took command of Task Force 50, a U.S. naval force led by the aircraft carrier Dwight D. Eisenhower, to help build trust and cooperation between the two navies.

According to Mr. Aussedat, the deployment also aimed to project French power and to “show the French flag” in regions where the country has “strategic interests” including the eastern Mediterranean. French energy company Total, along with Italian partner Eni, is licensed to drill for oil and gas off Cyprus.

“The presence in these areas is made to prevent and to fight for stability, for the freedom of navigation, for our freedom of action and of course the interests of France but also of the partners which are linked with us,” Mr. Aussedat said.

“It’s also a way to ensure our ability to appreciate, to assess the situation on a national basis, but also a European basis or on a NATO basis to prevent crises, but also to intervene if necessary.”