This website requires the use of Javascript to function correctly. Performance and usage will suffer if it remains disabled.
How to Enable Javascript
Several Dead, Thousands of Homes Burn as Fire Sweeps Rohingya Camp 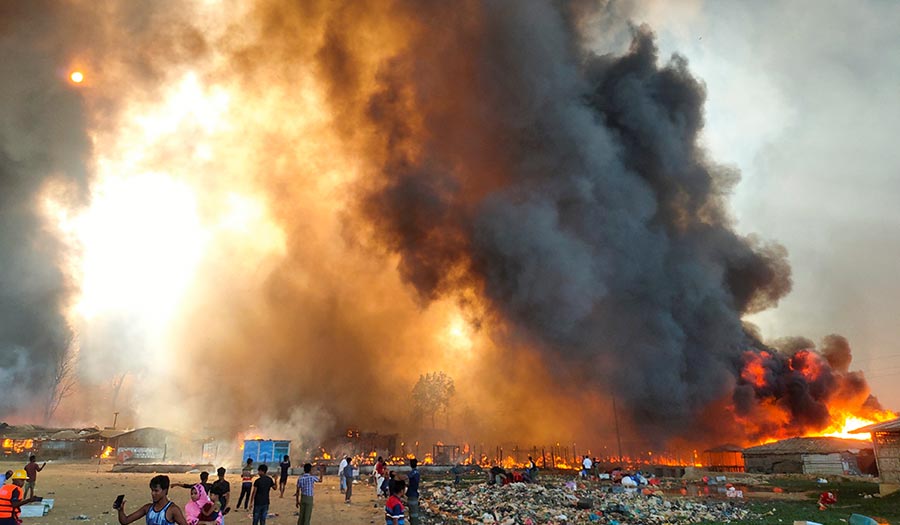 Smoke billows at the site of the Rohingya refugee camp where a fire broke out in Cox's Bazar, Bangladesh (March 22, 2021).

DHAKA (Reuters) – A huge fire swept through a Rohingya refugee camp in southern Bangladesh on Monday, destroying thousands of homes and killing several people, officials and witnesses said, in the worst blaze to hit the settlement in recent years.

Video and photographs showed a blaze ripping through the Balukhali camp in Cox’s Bazar. Black smoke billowed over burning shanties and tents as people scrambled to recover their possessions.

“Fire services, rescue and response teams and volunteers are at the scene to try to control the fire and prevent it spreading further,” said Louise Donovan, spokesperson for U.N. refugee agency UNHCR in Cox’s Bazar.

Mohammed Shamsud Douza, the deputy Bangladesh government official in charge of refugees, said authorities were trying to control the blaze.

Rohingya refugees in the camps said many homes were burned down and several people had died, but neither the authorities nor the UNHCR could confirm the number of deaths. The cause of the blaze has not been established.

More than a million Rohingya live in the camps in southern Bangladesh, the vast majority having fled Myanmar in 2017 from a military-led crackdown that U.N. investigators said was executed with “genocidal intent,” charges Myanmar denies.

Zaifur Hussein, a 50-year-old refugee who escaped the fire but lost his home and was sheltering with friends, said he believed dozens may have been killed and that fencing around the camps made it difficult to flee.

“When we were in Myanmar we faced lots of problems…they destroyed everything,” he said. “Now it has happened again.”

Snigdha Chakraborty, the Bangladesh director for Catholic Relief Services, said she was worried about the lack of medical facilities in the area.

“Medical facilities are basic and burns require sophisticated treatment, plus hospital beds are already partly taken up with COVID-19 patients,” she said. “Most likely there will be fatalities because the fire is so large.”

Another large blaze tore through the camp in January, destroying homes but causing no casualties.

The risk of fire in the densely populated camps is high, and Monday’s blaze was the largest yet, said Onno Van Manen, Country Director of Save the Children in Bangladesh.

“It is another devastating blow to the Rohingya refugees who live here. Just a couple of days ago we lost one of our health facilities in another fire,” he said.