This website requires the use of Javascript to function correctly. Performance and usage will suffer if it remains disabled.
How to Enable Javascript
Syrian Youth Still Paying High Price for Decade of War 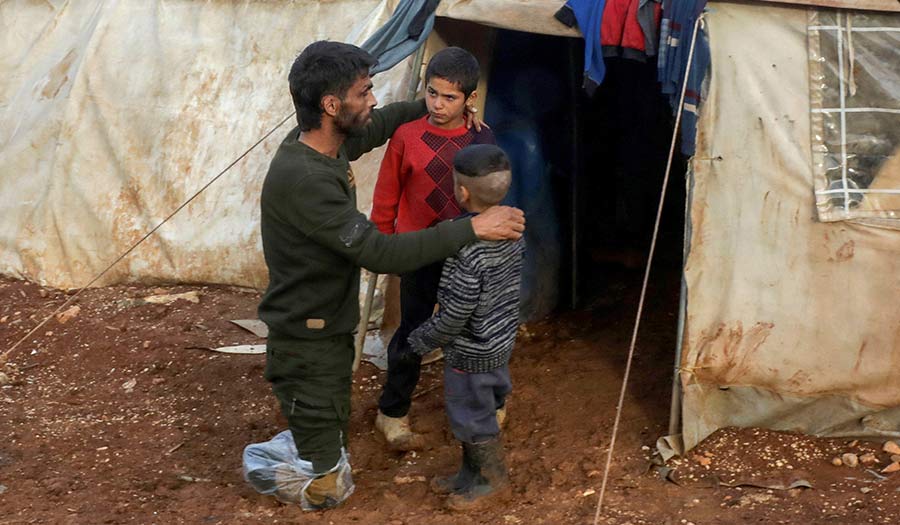 Ahmad Hamra is pictured with his children outside of a tent at an internally displaced Syrian camp, in northern Aleppo near the Syrian-Turkish border (Feb. 17, 2021).

GENEVA (Reuters) – Young Syrians have suffered heavy personal losses in a decade of war and still have to face rebuilding their shattered homeland, the International Committee of the Red Cross (ICRC) said on Wednesday.

A new ICRC survey of 1,400 Syrian nationals living in Syria or in exile in Lebanon and Germany highlights the costs for those aged 18-25 of a war that killed hundreds of thousands, displaced millions more and destroyed schools and hospitals.

“One of the shocking results of this survey is that we realized that 50 percent of Syrians had friends or a family member who was killed...One out of six Syrians had one of their parents either killed or wounded,” Fabrizio Carboni, the ICRC’s regional director for the Middle East, told Reuters.

“Rebuilding the country is on their shoulders and obviously it’s quite unfair,” he said in an interview at its headquarters.

The report coincides with the 10th anniversary of the start of protests against President Bashar Assad’s rule that turned into a full-scale civil war. Mr. Assad’s military has now regained control of most of the country with Russian and Iranian help.

Nearly half of young Syrians have lost their income because of the conflict and almost eight in 10 have reported struggling to afford food and other necessities, the report showed.

“Women have been particularly hard hit economically, with almost 30 percent in Syria reporting no income at all to support their family,” the ICRC said.

‘I Try to Comfort Them’

A video released by the ICRC with the survey shows 33-year-old Mouna Shawat using crutches to walk on one foot past blocks of bombed out buildings on streets full of rubble in the Syrian city of Aleppo before being fitted with a prosthetic device at its rehabilitation center.

Ms. Shawat’s lower left leg had to be amputated several years ago after an improvised explosive device blew up as she made her way home.

Ms. Shawat, who lives with her two children in Aleppo, recalls with nostalgia her youth before the civil war.

“We had everything—gas, diesel, services. Now we are cold and hungry, and we need to wait for gas to get warm. Sometimes we have to cook over a fire,” she said.

Referring to her children’s anxiety over her lost leg, she said: “To this day, every time it comes up they start crying, I try to comfort them.”